Q1 2012: Android OS active installed base overtakes that of Symbian

I've commented before on the size of Symbian's installed base of active users, pointing out that it's larger than most industry commentators would have conceived. However, with Symbian smartphone sales on something of a decline in recent months and with Android device sales still rising, it was clear that at some point the active installed base of the two smartphone OS would switch positions. According to my calculations this happened recently - Android has overtaken Symbian and is now the most used mobile OS on the planet - see the helpful chart below. 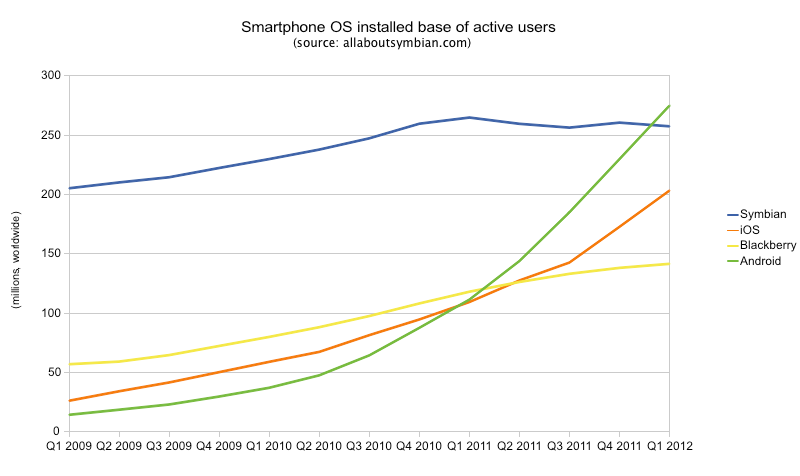 Of note for Symbian fans is that the platform's not going away in a great hurry, the size of the ecosystem and general active Symbian community has remained at just over the quarter billion mark for the last 18 months and, taking into account the same 3 year 'rolling sales' method of calculation, I'd estimate that it won't be significantly under 250,000 even at the end of this year, 2012.

And so effectively, Symbian, Android and iOS are by far the biggest existing smartphone ecosystems on the planet. Yes, I know we also run the All About Windows Phone web site, but the installed base for Windows Phone is still 'in the noise' in terms of the numbers being quoted on this chart - it's still very early days for this new smartphone platform.

Steve Litchfield, All About Symbian, 26 April 2012