Nokia Q1 2012 Results - losses all round, CEO recognises a 'clear sense of urgency'

"We are navigating through a significant company transition in an industry environment that continues to evolve and shift quickly. Over the last year we have made progress on our new strategy, but we have faced greater than expected competitive challenges.

We have launched four Lumia devices ahead of schedule to encouraging awards and popular acclaim. The actual sales results have been mixed. We exceeded expectations in markets including the United States, but establishing momentum in certain markets, including the UK, has been more challenging.

At the same time, the lower price tiers of our industry are undergoing a structural change, and traditional feature phones are challenged by full touch devices. As a result we are taking deliberate measures to continue to renew our Series 40 platform, and we plan to strengthen our line-up in Q2 2012. We are making investments in our Mobile Phones business unit aimed at addressing the gaps in our offering.

We have a clear sense of urgency to move our strategy forward even faster. We are pursuing step function changes by having launched the Lumia 610 and Lumia 900 in the first quarter, expanding market coverage, increasing advertising, introducing key customer-requested features and broadening our most successful go-to-market activities. At the same time, we have focused our efforts in the low-end of smartphones and feature phone asset to drive improved business results and conserve cash.

We are confident in our strategy and are focused on responding urgently in the short term and creating value for our shareholders in the long term." 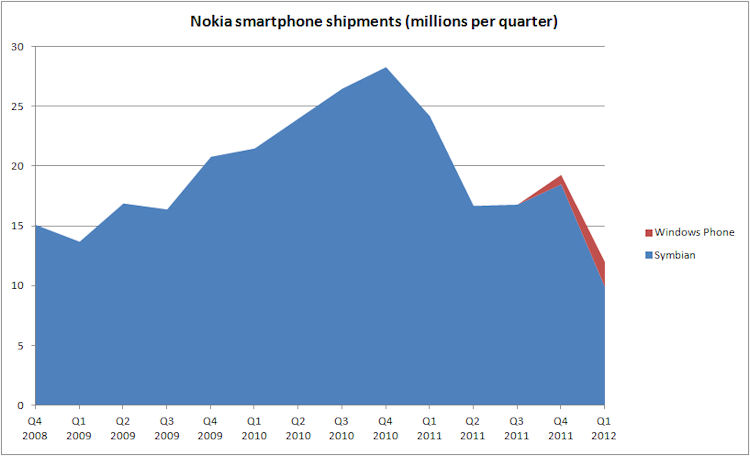 From Rafe's original comments on the quarter:

Despite these results, Symbian sales continue to remain a very important part of the Nokia smartphone portfolio. In the first quarter of 2012, five Symbian devices were sold for every Windows Phone device. The ramp up and segmentation of the Lumia devices remains somewhat constrained by both commercial and technical factors. Ultimately the transition from Symbian to Windows Phone is a gradual process, but it does appear to be somewhat rougher than was originally anticipated by both the company and external commentators.

On the Windows Phone side, the device sales numbers are more positive, with the sale of more than 2 million Lumia devices suggesting that Nokia has established early momentum. The attention will now shift to Q2's figures, which will include the launch of the Nokia Lumia 900 in the US and early shipments of the Lumia 610.

Both Year on Year and Quarter on Quarter, Nokia has seen global drops in device shipments and device sales. Overall, 'at constant currency', Devices & Services net sales would have decreased 38% year-on-year and 30% sequentially. The worst change was in Greater China where the IFRS change in net sales was -70% YoY and -43% QoQ, device shipment changes were -62% YoY and -37% QoQ.

As part of Nokia's agreement with Microsoft, Nokia also receives "platform support payments" from Microsoft, of which it received 250 million (USD) in Q1. Nokia stated that the total amount of the platform support payments is expected to slightly exceed the total amount of the minimum software royalty commitments. In other words, Nokia is getting royalty-free use of Windows Phone 7.

Clearly, the drop in sales of Symbian devices has exceeded expectations, even allowing for seasonal variation. The MeeGo powered N9 can be included with this appraisal. Also, Nokia has suffered price erosion, which has impacted on its margins. Even though Nokia has seen encouraging sales of the Lumia range in the North American Market, those added sales have been insignificant compared to the overall drop of mobile phones and smart devices.

Nokia are offsetting some operating costs though, as elucidated above. It is effectively using Windows Phone 7 without royalty payments. Plus, the maintenance demands of Symbian were passed on Accenture some time ago, which reduced the overall cost of maintaining Nokia's legacy platform.

Despite that though, Nokia have still made a net loss of 1.5 Billion Euros, which is significant against its cash reserves of 4.9 Billion Euros.

We've known that Symbian OS was starting to decline in terms of mass market competitiveness and marketshare for a while now (despite the sales peak at Q4 2010 - which was the N8's first sales quarter), though debates still rage about how seriously the decline was then accelerated as a result of the February 11th 2011 communications about Symbian's future. So we have a declining chart for Symbian sales figures above, with Windows Phone shipments only now just beginning to compensate. It's clear that the latter's rise isn't yet matching the fall in sales of the previously championed operating system, leading to something of a shortfall in overall sales success during 2012.

Will Nokia run out of money during this transition period? It's unlikely, Nokia still has large cash and liquid assets, around EUR 10 billion worth. CEO Stephen Elop today described market conditions as 'challenging' - now there's an understatement. The pace of innovation and development in mobile has never been so high (and I've been covering this industry now for 19 years!) and it does seem as though Nokia understands the need for 'a clear sense of urgency to move (our) strategy forward even faster'. We've observed some of this change in 'internal clock speed' ourselves in Nokia's recent activity in both the Symbian and Windows Phone worlds.