No, 'NFC Interactor' isn't a new smartphone particle weapon plug-in, it's actually a cool diagnostic for tag-reading purposes and an even cooler tool to let you write your own NFC tags, should you have some that are unlocked and writeable. And remember that if NFC is all Greek to you, check out my NFC Primer. NFC Interactor is cool in another way, too, in that it's one of the first Symbian applications to use in-app purchasing via the Nokia Store. 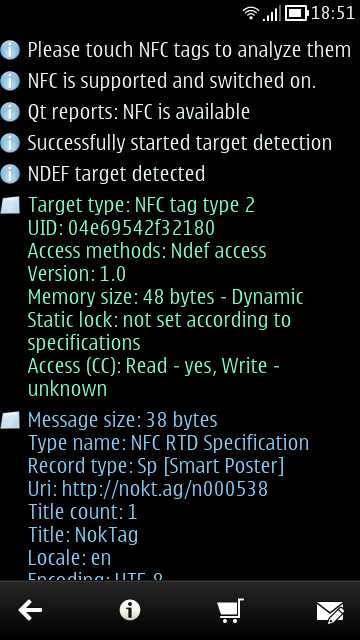 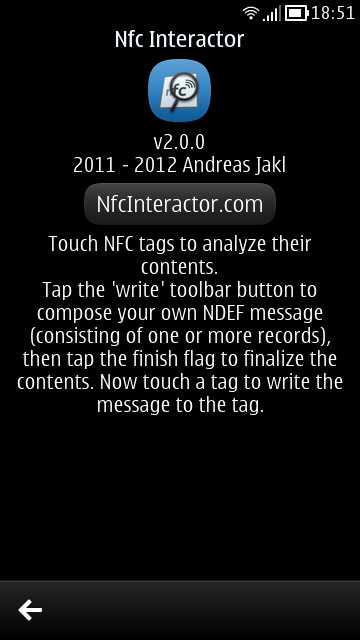 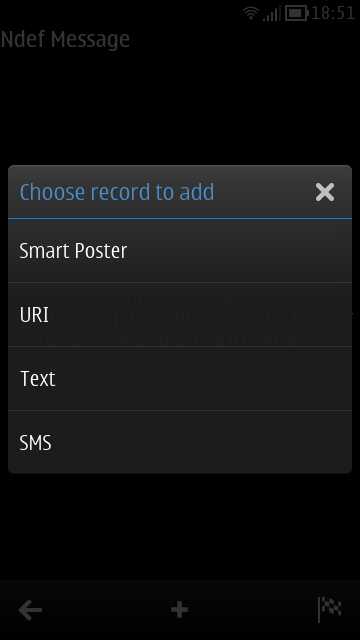 "Ever saw an NFC tag at a bus station and wanted to know what's really stored on it?" runs the blurb here on the NFC blog. Yes, indeed I have, and haven't always wanted to try the tag without knowing what it's going to. NFC Interactor's developers say: "Just touch the tag with the app running on your phone, and you will instantly see low level information about the NFC tags and its contents."

And, if you're lucky enough to have unlocked NFC tags, the "dynamic NDEF message editor UI lets you create your own tags in the most flexible and comfortable way."

Nfc Interactor is now conveniently available in the Nokia Store for several NFC-enabled Symbian phones (it's not tagged for the C7 with Belle as yet, though I can confirm it works fine, as screenshotted here) and the Nokia N9 with MeeGo Harmattan. The app is based on Qt and is (unusually for a 'demoware' app) completely open source as a code example, "to inspire you and to enable re-use of its versatile and completely documented components for your own NFC apps."

Aimed at enthusiasts and developers, Nfc Interactor reveals low-level information about the NFC tags you touch, including their tag types, UIDs and for some tags additional information like the memory size and lock status.

Most NFC tags contain standardized NDEF messages (like Smart Posters, URIs or business cards), which are parsed and shown on-screen, nicely formatted so that you can easily read their contents.

The most powerful part of Nfc Interactor is the dynamic NDEF editor UI. Compose your own NDEF messages containing multiple NDEF records, just by adding all the records you need to a list. Many records support optional information, which you can supply if needed (e.g., the Smart Poster supports multiple titles in different languages and allows setting the recommended action for the reader). A short help text explains the basics of each record type. The top bar will always keep you updated on the size in bytes of your current creation, so that you can ensure it actually fits on your tag. Once finished, write your message to as many NFC tags as you like.

Nfc Interactor also includes many ready-made templates for conveniently writing more advanced tag types. "This includes Geo Tags to link to coordinates and launch the Maps application on the phone, or App Store tags to link to your app in the store corresponding to the actual mobile operating system of the user. "

On the social side, you can write business cards (in the common vCard format) and social network tags, which link to your favorite social service like Twitter, Facebook, LinkedIn or vKontakte. In the SMS record editor, you can directly enter the telephone number of the receiver and the body text to be sent — these records can for example also be used for payment via premium SMS (this method is used for many NFC tags that let you purchase a public transport ticket). 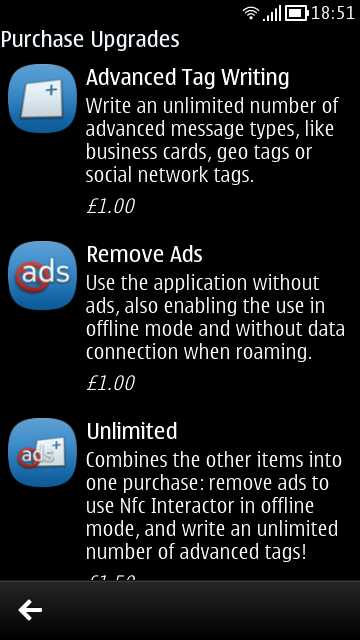 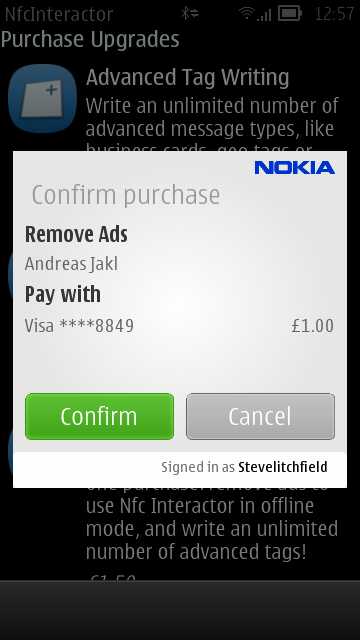 NFC Interactor can be downloaded for free. In addition to demonstrating the NFC APIs, it is also a real-life example and showcase for In-App-Advertising and In-App-Purchasing. The free version always reads NFC tags, plus it writes an unlimited number of basic tags (e.g., URL, Text or Smart Poster) and up to 10 advanced tags. It is supported by the Qt ad-APIs provided by inneractive. Upgrading to the Nfc Interactor 'Unlimited' removes the ads and unlocks writing an unlimited number of advanced tags. The complete source code of the application is available on the SVN server at Nokia Developer Projects.

Yes, yes, there's a purchase fee for something you could compile and build yourself, but paying £1 or so to save yourself a lot of SDK fiddling around sounds like a good deal to me, plus it helps support the innovative developer, Andreas Jakl - to whom, kudos.

NB. This version of Nfc Interactor replaces the previous Java ME-based NFCinteractor. The new Qt-version is more powerful and introduces a wealth of new features, plus improved reading support. The Java ME-based project is still useful as a code example and has therefore been renamed to  Nfc Creator. This Qt-based Nfc Interactor also succeeds the  Nfc Info project, which was only capable of reading tags.