Yes, you can turn stats to prove almost anything and goodness knows we've seen enough of that from the tech media in recent years. So time for a shot across the bows with a look at that favourite stat from the 'superphone' brigade: mobile web browsing, sorted by smartphone platform. It'll be iPhone and Android all the way, right? Wrong. Hopelessly wrong.

In fact, according to StatCounter, since 2009, Symbian smartphone use has fared better than iOS. Have a look at this chart, compiled this morning with latest data: 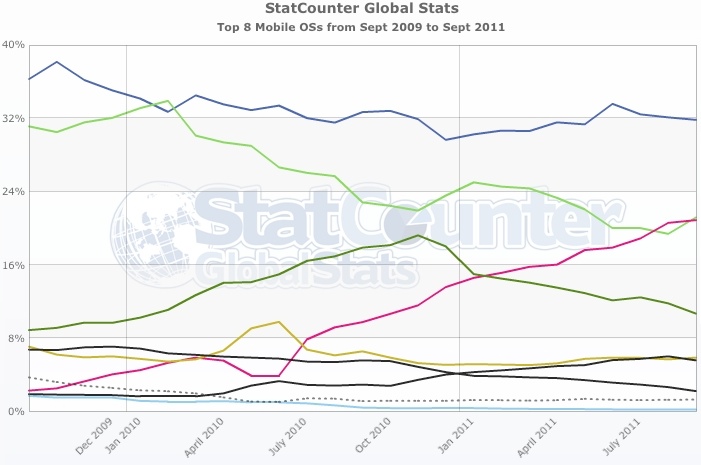 Now, obviously, smartphone Web use (i.e. people using their phones to access information on the Internet, in this case StatCounter's extensive network of auto-detecting sites) doesn't equal smartphone sales, let alone profits, and noone would disagree that Apple and its iPhone has been making vastly more money than any other manufacturer and phone, but still the chart above should amaze.

Looking at the data above, the blue line is the mobile platform that has consistently performed best - and that's Symbian, even keeping its worldwide use stats while those from iOS devices have been falling in terms of percentage/share.

Incredulity will perhaps follow from most people looking at the chart - Symbian's performance (by this Internet access metric) is due to the sheer number of sales over the two year period, and the year or so before, i.e we're talking active users across the world. I've talked before about not underestimating the inertia behind Symbian's installed base - the numbers boggle the mind (I've reproduced the chart from that piece below, for easy reference). Whatever you might think from reading T3 or Engadget or Gizmodo, far more people on this planet still use Symbian, every day, and not just as a dumb feature phone - StatCounter's chart shows that there's an awful lot of Internet use (i.e. as a smartphone) as well.

Added to the huge installed base of Symbian smartphones is the factor of the rise and rise of affordable data, even on pay as you go SIM cards, across the world. In other words, just about everyone is now getting online whether they've got a lowly Nokia 5800 or a top end iPhone 4 - in StatCounter's eyes, data access is data access.

Yes, Symbian has been given an End Of Life notice, yes, Symbian's long term replacement is now well and truly in place, but a worldwide market share (by use) of 32% is still significantly higher than any other mobile platform and really illustrates that platform 'plays' in the industry work themselves out over a much longer period than most people realise - three or four years rather than three or four months.

Steve Litchfield, All About Symbian, 14 October 2011 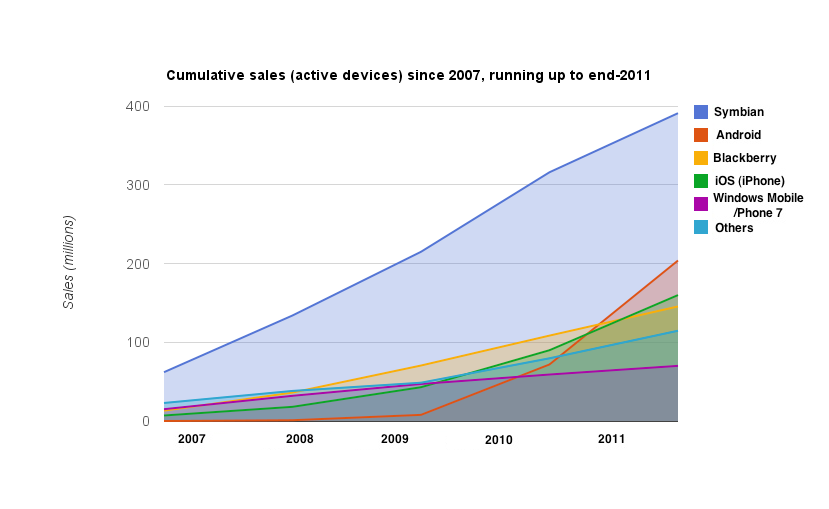