Gartner has released a summary of its worldwide analysis for the mobile industry for Q2 2011 and it, as expected, shows that the in-demand Android smartphones have leapfrogged Symbian in the rankings. I've quoted the main tables below, but in summary, Symbian OS's marketshare worldwide is now 22%, with 23.8 million smartphones being sold.

Gartner's number contrasts with Nokia's own Q2 sales numbers of 16.7 million - a difference of 7.1 million devices. The difference is due to Gartner counting sell through (i.e. direct sales to consumers) rather than sales (i.e. sales to operators and retailers). Operators and other retailers have been de-stocking Nokia devices in anticipation of new Windows Phone-based devices and this was further exacerbated by over-stocking (channel stuffing) in some markets in Q1. 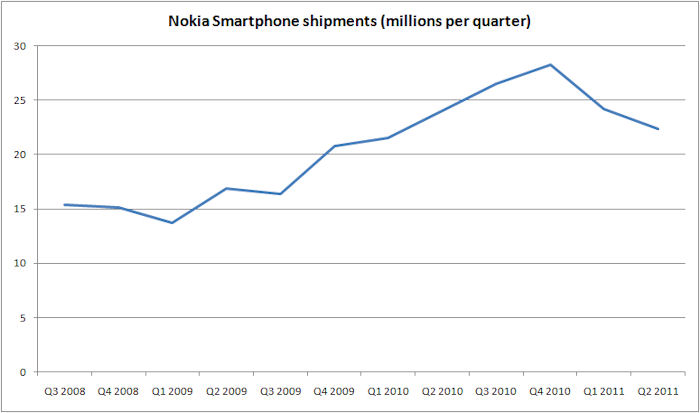 So Nokia remains number one and sold almost 100 million phones during the quarter, but it's a significant drop from a year ago, despite the ever-growing mobile market, which is edging ever closer to selling half a billion phones each quarter. Amazing numbers, really.

Turning attention to smartphones, i.e. (in our case) Symbian, this was the first full quarter of sales after Nokia announced its decision to give Symbian an End-of-Life date and its intention to transition to Windows Phone and, combined with the onslaught of ever-cheaper Android smartphones, the figures reflect an unsurprising dramatic dip, compared to stats from a year ago:

Google and Apple are the obvious winners in the smartphone ecosystem. The combined share of iOS and Android in the smartphone operating system (OS) market doubled to nearly 62 percent in the second quarter of 2011, up from just over 31 percent in the corresponding period of 2010 (see Table 2). Gartner analysts observed that these two OSs have the usability that consumers enjoy, the apps that consumers feel they need, and increasingly a portfolio of services delivered by the platform owner as well.