Today, Nokia Beta Labs released Nokia Play To for Symbian^3. This application allows you to show and play media, stored on your phone, over WiFi, on compatible devices, such as TVs, home audio systems and PCs. The application uses DLNA, which means no configuration is need once WiFi is on and all devices are connected to the same network. It's a great way to show off your latest photo, videos and music download to your friends.

Nokia Play To is designed to ease the process of playing media stored on your mobile through remote devices. Once you have opened the application, choose which device to connect to, and then choose the photo, video or music file to play. In most cases the media will appear within in a few seconds on your chosen device (longer times are possible, depending on the size of the file and the speed of your wireless network).

We tested this with a Windows PC and found audio and images were played in around one second, with videos taking around three seconds. Similar results were observed on a Sony TV. Once a media item has begun playing, you can use the Nokia Play To application to find the next media item, while the first is played in the background.

You can also browse the files on your phone from a DLNA control point (player). In this instance, the UI will be controlled by the playback device, rather than the phone. In order to do this you will need to turn on the DLNA server in your phone, by going to Settings->Connectivity->Media Server.

DLNA compliant devices are more common that you may realise. For example Windows Media Player 11+ supports DLNA (you may need to enable this setting), which means any Windows PC can be used with Nokia Play To. In addition, many recent TVs and Blu-Ray players have this functionality built in. Also, the Xbox and PlayStation entertainment consoles also support the DLNA standard. 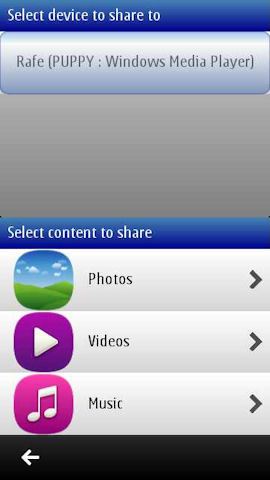 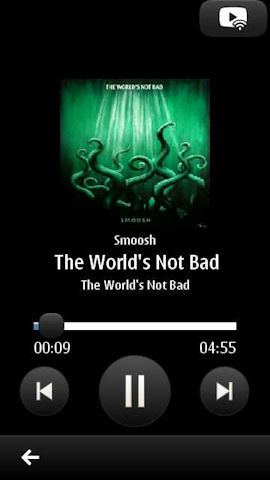 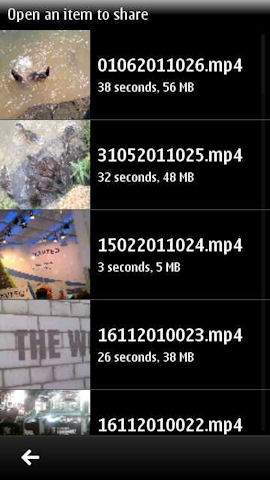 Nokia Play To contains only a sub set of DLNA features (specifically server and media push), but additional features (e.g. acting as a remote control for another DLNA device, or showing media from another device) are supported by the underlying libraries. This means it would, in theory, be possible to support such functionality in the future. However, the Nokia Beta Labs blog posts does note that, "we wanted to concentrate on creating a solution for easily enjoying mobile media on a big TV screen or with an audio system", and this is clearly the most common use case for devices like mobile phones.

Nokia Play To can be downloaded from the Nokia Beta Labs website. The release notes contain some useful hints and tips and notes on some of the application's limitations. As usual, Nokia Beta Labs is looking for feedback, suggestions and bug reports, and you install beta applications at your own risk.

A note on Symbian an DLNA functionality

Nokia's Symbian devices, from the N95 era (S60 3rd Edition Feature Pack 2), used to have DLNA function built in via the Home Network application, which was able to act as both a DLNA server, renderer and remote control. However this application was removed in S60 5th Edition and above devices. The Symbian platform gained the appropriate enabling libraries with the Symbian^3 release, but had no application to take advantage of them. That has now changed with the release of Nokia Play To.