Marko Ahtisaari, SVP of industrial design at Nokia, was one of the guest speakers at this year's LeWeb Conference. He covered topics from dominant designs of smartphone user interface and collective intelligence with mobile devices. He outlined why he sees that there's plenty of work to be done in the world of mobile user experience, particularly in having mobile devices actually demand less of our attention. In his view, iOS is "beautifully elegant and fantastically constrained", while Symbian and Android actually share the same design pattern but differ greatly in their business models. Read on for a in-depth account of the speech and Q&A session.

A brief summing up of Marko Ahtisaari's talk can be found at Nokia Conversations. You can watch the full 20 minute session here, and read an in-depth write up and commentary below.

To match LeWeb 2010's theme of platforms, Ahtisaari focussed his talk on two themes his work is concerned with, namely dominant designs (of user interface) and collective intelligence. He started out by commenting that the mobile space is a hot area and over-covered by the media, which gives the false impression that innovation is complete and we already have the dominant smartphone design, which in his view is a mistake. Rather, he thinks that we're at the same point as the automotive industry was in the 1890's, where tillers had yet to be replaced by steering wheels!

He explained that there are currently two candidates for the dominant smartphone user interface (UI) design; which he often referred to as a "pattern". The first of which is the iOS pattern, a screen full of apps (and folders), with a single physical button which acts very much as a mouse click. In his words iOS is "Beautifully elegant, easy to learn and fantastically constrained".

The second candidate is a pattern shared by Symbian and Android; that being a multiple customisable home screen. The theory is that these home screens are so simple and organic to customise that users naturally end up controlling their device via these home screens. In this type of pattern, there is often more than one physical button, and there is a wide range of designs and buttons. The other key aspect to this pattern is the use of home screens to display live information and views into apps, which are known (to the rest of us!) as widgets. 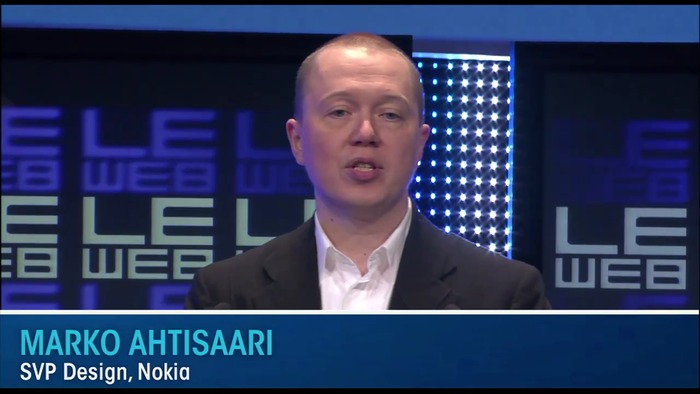 While he thinks that these two patterns are interesting, he finds it hard to believe that this is where innovation ends. For example, Windows Phone 7 has introduced a new pattern, which if nothing else shows that there is still demand for a new way to interact with devices. It is meeting this demand that Nokia's design team are spending all their time on with the development of the MeeGo handset UI. Unfortunately, he was unable to show the audience anything of what we might expect to see in the new MeeGo UI. Later, in the Q&A session, he would only state that it would be launched in 2011, but that it would only launch when it was "ready" and when it was "amazing".

Ahtisaari on MeeGo:
"It will only ship when it's ready and when it's amazing"

Addressing the user experience (UX) of mobile devices, he commented on how current touch screen interfaces are immersive experiences. He gave the anecdote of seeing a couple who had been together for 15 years sat together in a restaurant, effectively ignoring each other with their heads down to their phones. While there are other marital causes for such behaviour (!), Ahtisaari thinks we'd be missing a trick if we did not redesign the UX to give people back their "head up". A slogan which he also used when I saw him at one of the Speakers' Corner sessions during this year's Nokia World. This is not only important while socialising and relating to other people, but also while navigating with Maps; a subject which took him onto his next topic, collective intelligence.

Ahtisaari believes that the competitiveness of future smartphone and tablet operating systems will be measured, in part, by how they make use of collective intelligence. That means how well a platform improves, the more people use it; a positive feedback loop.

He cited the example of Ovi Maps, with which the total distance navigated every day is equivalent to eighty times the circumference of the Earth! 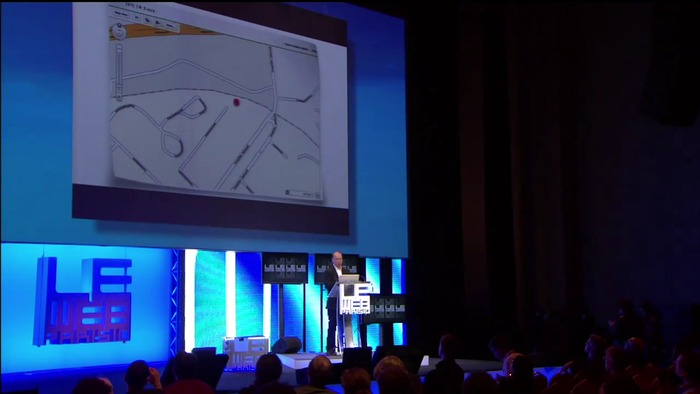 Another application of collective intelligence in Maps is actually monitoring users' movements to improve the map data itself. By monitoring if a significant number of users are going off piste in a particular location, Nokia can see that their map data there is out of date and take steps to correct it.

Navigation isn't the only application of collective intelligence though. As mobile devices incorporate more sensors, platform operators can infer all sorts of activities. A trivial example would be telling the difference between a dance floor inside a nightclub and the queue outside. In general, Ahtisaari stated that as long as there is a sufficiently diverse and large population of people working independently on a problem, almost all questions can be answered with collective intelligence.

Ahtisaari on collective intelligence:
"Using sensors is an exciting opportunity"

After his speech, Ahtisaari joined the LeWeb host for a short interview.

When asked about Nokia's market share and mood, he answered that the constant attention on Nokia and the question of mindshare is separate to the real story of sales and user base. Nokia has 1.3 billion users world-wide, and "that story doesn't get written up much". However, he did concede that Nokia couldn't cut through the negative media attention unless a new pattern is created which would allow Nokia to regain people's imagination. 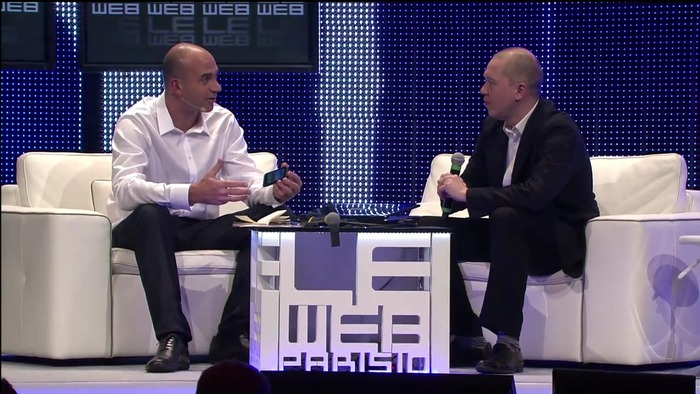 Ahtisaari said he wants to see devices where the front is nearly all screen, with no buttons at all. He believes that physical buttons, even the single button found on the iPhone or N8, remove the user from the UX by forcing them to break away from the screen to make something happen on it. He said that they [Nokia] can increase the ratio of screen size to device size, and have increasingly smaller devices with larger screen to "let the apps shine".

One can debate Ahtisaari's view on this. For decades, people have used the desktop metaphor of keyboard and mouse. While they may not be directly interacting with the graphical UI by touch, they are still immersed in the experience to the point of only being vaguely conscious that they are pushing a physical object (the mouse) which is often positioned out in their peripheral vision. So touch interfaces need to take care that the need for touch doesn't interfere with the UI by having the finger occlude critical information.

Ahtisaari on design and applications:
"Larger screens to let the apps shine".

When asked about future trends, Ahtisaari wants to let people interact with their devices in ways that do not demand their full attention, allowing people to have their "head back up". He described this as a soft trend, where less and less attention will be paid to devices. The host asked "Oh, so I can just think a tweet and it happens?", Ahtisaari answered "Not quite, but we can get better".

The interview then moved to the developer story of Nokia. The new development environment of Qt and QtQuick was emphasised as a reason to develop for Nokia, over the 1.3 billion user base. Ahtisaari admitted that Symbian has been challenging to develop for, but now the integrated development environments of Qt, QtQuick and also HTML5 will allow developers to develop for Symbian and MeeGo. When asked more about HTML5, he stressed that Qt and QtQuick should be used if performance was important.

Nokia are also looking to aid developers with the local relevancy of their applications. Nokia has a significant global reach and so are well positioned to help with localisation of applications (i.e. languages). Also, Nokia can help developers create locally relevant applications.

Ahtisaari on developers:
"Symbian has been a challenge to develop for"

The host asked Ahtisaari the awkward question of whether there will ever be a Nokia phone with Android. The answer moved into an interesting reflection on business models: "We're interested in using platforms where we can create added-value, and if that were the case with Android [we would], but isn't the case right now". When quizzed further by the host, Ahtisaari went on to say "We're in businesses where you can create value (from the point of view of the device manufacturer)". In his personal view, he also said that he thought it was far more interesting to create a new pattern, rather than falling back on an established one.

Ahtisaari on consumers:
"Consumers deserve choice, consumers desereve a European based ecosystem.
We have a responsability as the leading mobile company in Europe to work on that."

Ahtisaari went on to explain that while Symbian and Android share UI patterns, their business models are different. The question is of who makes makes money and how. These models are different in Android and Symbian. He didn't expand on this in the session, although for the reader's benefit, the largest difference in my view is that Android is a commodity platform, available for any device manufacturer to make use of. Revenues from the application market go to Google, while the manufacturers only make money from their hardware sales. Whereas Nokia are producing both the platform and the hardware. Not only do they make money from selling handsets, but they make even more money by also providing the platform and ecosystem. 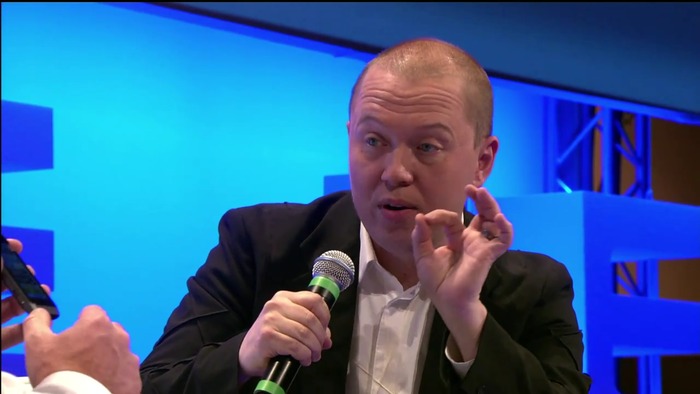 At the end, Ahtisaari was asked whether the new MeeGo UI would be better than the iPhone. Ahtisaari hesitated to answer, but then said "We believe in shipping ... it's only going to ship when it's right and when it's amazing". As the host pressed him further on the original question, he answered "I look at the competition very broadly. And by the way, our competition globally isn't iPhone land. There's a little bit of a Cupertino distortion field sometimes happening". That so-called distortion-field is a well documented phenomenon. To lend some interpretation to Ahtisaari's evasive answer, in his speech, he emphasised how iOS and Symbian/Android are the two dominant UI patterns, and that Nokia's design team were working hard to create something completely new for MeeGo. In that case, the question of whether it will be better than the iOS user interface is something of an invalid question, because UX is highly subjective.

The LeWeb session was full of intention and great ideas. Understandably, there was little concrete detail on what we can expect to see in the future. Because of that 1.3 billion user base of Symbian, Nokia are understandably cautious of making a great break with the established user interface, especially now that Stephen Elop has cancelled the step-jump to Symbian^4. In Ahtisaari's words, "there is a lot of muscle memory out there". However, we have seen a steady evolution of the Symbian user interface, and there is every reason this will continue. We can only speculate at what we will see when the first MeeGo handset comes out of Finland, all we know is that the current handset test builds are not at all representative of what we'll see. It will be interesting to see if anything from the MeeGo UI and UX will trickle down to future Symbian devices.

David Gilson for All About Symbian and All About MeeGo, 13th December 2010.