The full version of Angry Birds, the smash-hit mobile game and productivity destroyer, is now available in the Ovi Store, at at cost of £3. In the game you help the Birds take revenge on the Pigs for stealing their eggs. Across the 105 different levels, you use the destructive power of the Birds to knock down walls, castles and more to reach the thieves. Angry Birds is highly addictive and very popular, however there are those who feel it glamorises Avian-Porcine conflict.

Angry Birds is a native Symbian and Open GL ES 2.0 application. It takes advantage of the new graphics co-processor, which is an integral part of Nokia's Symbian^3 hardware family, and is a great demonstration of the gaming capabilities of the Nokia N8 and C7. 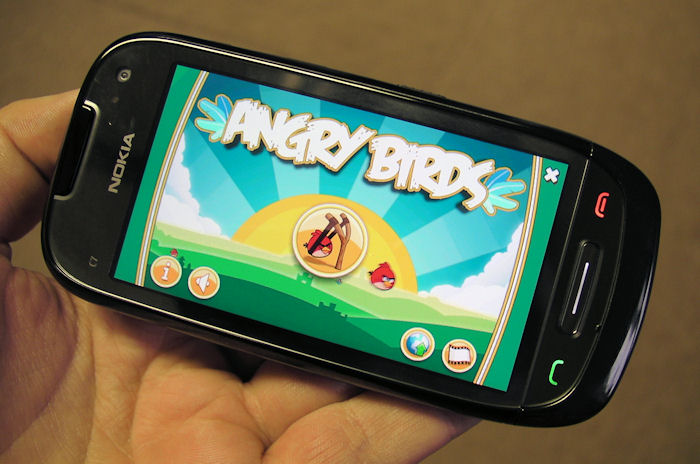 Angry Birds on the Nokia C7

Angry Birds for Symbian^3 (v1.2.1) The survival of the Angry Birds is at stake. Dish out revenge on the green pigs who stole the Birds ’ eggs. Use the unique destructive powers of the Angry Birds to lay waste to the pigs’ fortified castles. Angry Birds features challenging physics-based castle demolition, and lots of replay value. Each of the 105 levels requires logic, skill, and brute force to crush the enemy. Protect wildlife, or play Angry Birds!