Nokia's Board of Directors has appointed Stephen Elop, currently head of Microsoft's Business division, to replace Olli-Pekka Kallasvuo as CEO of Nokia as of September 21st. As a Canadian, he becomes the first non-Finn to lead the company, reflecting Nokia's increasingly global management and work force. The market is responding positively to the news, with Nokia shares up 5% in early trading.

Elop joined Microsoft in January 2008, previously he was the COO of Jupiter Networks (2007-2008), an executive at Adobe (2005-2006) and CEO of Macromedia (1998-2005). He is an engineer by training, but has also had customer focused roles; he has a background in delivering software and services, which is likely to be a strong asset.

Olli-Pekka Kallasvuo has spent thirty years at Nokia, the last four as CEO. He led the company's push into services, presiding over the launch of Ovi. During his tenure, the company has faced increasing competition in the mobile phone and smartphone segments; while Nokia has successfully maintained its position in the first, it has faced fierce competition from RIM, Apple and Google in the second. Following today's news, Kallasvuo will also step down from his position on Nokia Board of Directors with immediate effect.

The announcement brings to an end to the speculation around the future leadership of the company. However, it is likely to ignite a fresh round of speculation as to which direction Mr Elop will take the company. It will be a hot topic at next week's Nokia World, where Nokia is set to make a series of device, services and developer announcements.

"The time is right to accelerate the company's renewal; to bring in new executive leadership with different skills and strengths in order to drive company success. The Nokia Board believes that Stephen has the right industry experience and leadership skills to realize the full potential of Nokia. His strong software background and proven record in change management will be valuable assets as we press harder to complete the transformation of the company. We believe that Stephen will be able to drive both innovation and efficient execution of the company strategy in order to deliver increased value to our shareholders," said Jorma Ollila, Chairman of the Nokia Board of Directors.

Elop commented on his new Nokia position: "I am extremely excited to become part of a team dedicated to strengthening Nokia's position as the undisputed leader of the mobile communications industry, with a relentless focus on meeting the needs and expectations of customers. Nokia has a unique global position as well as a great brand upon which we can build. The company has deeply talented and dedicated people, and I am confident that together we can continue to deliver innovative products that meet the needs of consumers. The Nokia slogan clearly states our key mission: Connecting People, which will acquire new dimensions as we build our portfolio of products, solutions and services." 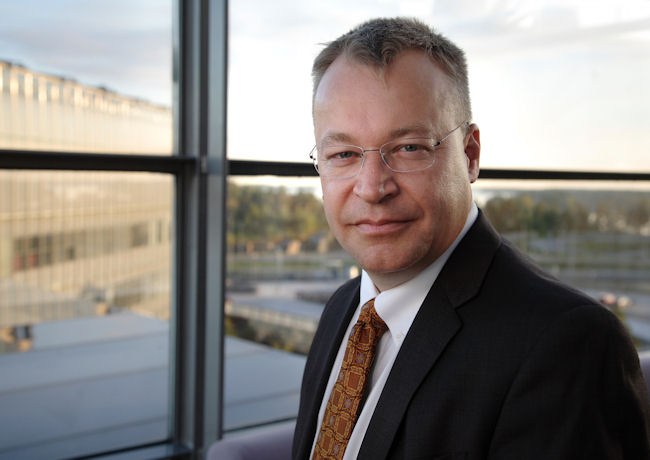 From the Nokia press conference

Nokia held a press conference at 11 am (BST) today, where Jorma Ollia, Chairman of Nokia, introduced Stephen Elop to the media and explained some of the process behind the new appointment. Ollia indicated that, "in late May of this year we started a CEO search program", and that it had been, "an extensive process":

"We asked ourselves who would be the best person for Nokia and enable [the company's] renewal to be successfully accelerated. In the last month, after we had looked at several internal candidates, as well as several external candidates, we narrowed in on Stephen Elop and, after a number of discussions, concluded a contract with him.

The board felt that now is the right time to accelerate the company's renewal, to bring in some new executive leadership, with slightly different skills and strengths. We believe that Stephen has the right industry experience and the leadership skills to realise the full potential of this great company. It is particularly his strong software background and proven record in change management that will be his strongest assets as we push harder on completing the transformation.

I want to make one particular observation, from Steve's background, and evident from many discussions the board and myself have had. He has a very strong culture sensitivity and a grasp of the importance of Nokia's special heritage. These [will be] important attributes in making his tenure a success."

Stephen Elop then made a number of opening remarks, noting that, in the technology world, there are critical moments when fundamental changes take place, such as the introduction of the GUI and the advent of the browser based Internet. With this changes come tremendous opportunities and challenges.

When those moments of change arise, tremendous opportunities are created, as well as tremendous challenges. Both of those things come. Whenever there is a big moment of change, you see all sort of other companies, entrepreneurs and competitors rushing to the scene and offering new approaches to hardware, new operating systems, new application platforms, new services and even new ways of making money.

For Nokia, the opportunity represents a huge opportunity. The reason for this is that Nokia can take advantage of its many strengths and assets and apply them. These strengths include the calibre of the people, here at Nokia in Finland, and all around the world. It includes the quality of our products and our engineering prowess. It includes the strength of our partners, our suppliers, our entire logistics and distribution networks. And it also includes our developing strengths in software development and the delivery of services. All of these things can be brought to bear, if we take advantage of all of those assets, while also listening, listening very carefully, to the ultimate consumers of our products. Because things are changing so quickly, we have to listen and respond and react and deliver solutions that make sense today. That is Nokia's opportunity.

My role, as the leader of Nokia, is to lead this team through this period of change, take the organisation through a period of disruption. My job is to create an environment where those opportunities are properly captured, to ultimately ensure we are meeting the needs of our customers, while delivering superior financial results.

I will start my employment on Tuesday 21st, 2010, and what I will begin to do immediately, most importantly, is to listen. I will be doing a great of listening, learning and adjusting... From that work, the team will introduce the changes necessary to ensure that Nokia can take advantage of all of the opportunities that are here to deliver great results during this time of change, while also recognising that the core element of our strategy, that of connecting people, will continue as a critical element of our strategy."

Elop reminded the audience that he has had many opportunities to interact with Nokia, during his career:

Elop also indicated that he recognised the importance of Nokia to Finland (and vice versa).

"I also recognise, as Jorma mentioned, that I have a unique responsibility. The critical relationship which exists between Nokia and the society of Finland. So in the weeks and months ahead I have a great deal to learn about Nokia, but also about Finland. And that has already begun. The one thing I will say is that process has been greatly supported by my heritage as a Canadian. Canada and Finland share the Arctic Circle, and that will hold me in good stead as I move forward!"

During the question and answer portion of the conference, Elop was asked about potential changes:

"It is way to early to make comments [about changes]. The one thing I will say is that the process through which I will go, one of deep listening, recognises that I believe the challenges that Nokia face are well known within the walls [of Nokia] and the answers are also well known. My job is to surface those, to make sure we are dealing with them efficiently and are moving the company forward."

This, perhaps, gives an early indication that the primary focus will not be a fundamental change in strategy, but rather an improvement on execution and communication of the current strategy.

A video of the press conference can be viewed here.