Battery life is top priority to 38% of users

Nokia Conversations recently ran a poll asking what's more important than battery life? Yesterday, they published their results with the largest segment of users, 38%, voting for the 'Nothing' option. The runner-up choice was Connectivity, with 25% of the vote. Multimedia capabilities took third place with 17% of the vote. Read on for more commentary. 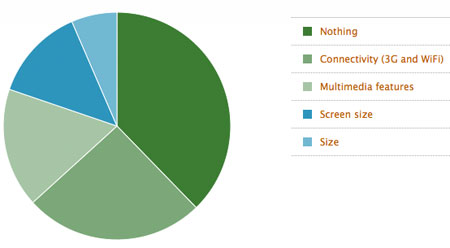 While the largest segment of users here prioritised battery life above everything else, it was only 38% of the vote. Conversely, 62% of users didn't rate battery life as the most important aspect of their device. It's a curious set of results; the least popular aspect here is device size. Obviously, the lower the volume, the less energy can be physically stored. However, Connectivity (25%), Multimedia (17%), and Screen size (13%); are all energy draining aspects.

While phones are mobile devices, this does hint to how that most people are using these devices indoors around urban areas where a charging point is never far away. That said, there is still room for the likes of the E71/72 with Nokia's 'hero' BP-4L driving a relatively small screen which will run in the field for days on end before needing a recharge.

You can read Nokia Conversation's analysis of the results here.