Preview of new Ovi Store client for the Nokia N8

During its N8 developer event, which took place in London yesterday, Nokia demonstrated some of the key features of their upcoming Symbian^3 handset. This included, for the first time on a real device, a preview of the new Ovi Store client.  The new Ovi Store client has been redesigned to make it more attractive and easier to use. Read on for some exclusive images and preview comments.

Update: In an earlier version of this story we indicated that the new Ovi Store client was written in Qt. This is not the case, the Ovi Store client continues to be based on Web Runtime (WRT) technology. We apologise for the error.  Additional details here.

The version I saw running on the N8 was described as a preview, aimed at giving developers an idea of what the new Ovi Store client would look like. As such, it was not the finished article and, like the rest of the N8's software, is a work in progress. The new client will ship with the N8 when it launches later this quarter.

The most obvious change in the client is the thorough overhaul of the design, which has been lightened and simplified, with flatter and more consistent navigation. It benefits greatly from Symbian^3's single tap 'paradigm', which makes the client slicker and more intuitive in use.

In terms of pure functionality, there are no major changes, although the new client will be the building block for the introduction of features such as application updates, subscription and in-application billing, which will arrive in due course.

When you first open up the client, you see the same recommended list of content as before. There are now six items on the screen at any one time, up from five, and a reorganised navigation bar at the top of the screen: Ovi Store (home), Categories (browse by content type), Search, and Account (account details). At the bottom, the left softkey is labelled 'Store menu' (replacing Options), which pops up an overlay menu window (see below), one of Symbian^3's standard UI widgets. The right softkey is used for navigation 'Back' where applicable. 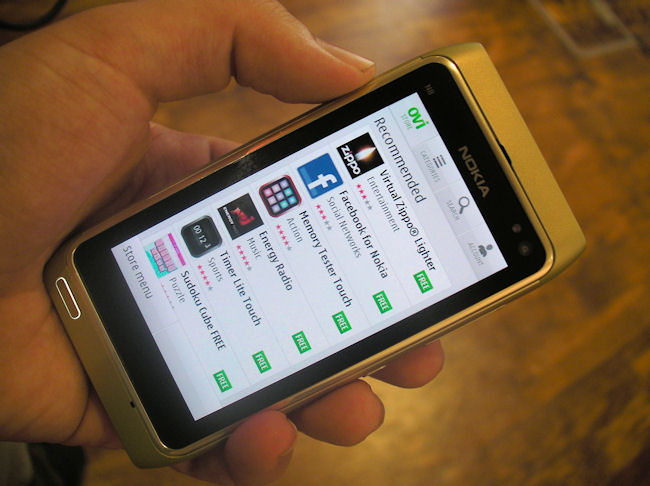 On the home page of the store, beneath the recommended content list, there are links to each of the content sections, which should encourage novice users to browse the store for additional content, rather than solely sticking to recommended lists. It is also notable that Nokia has made an obvious distinction between the labelling of free content (green box) and paid content (price listed). 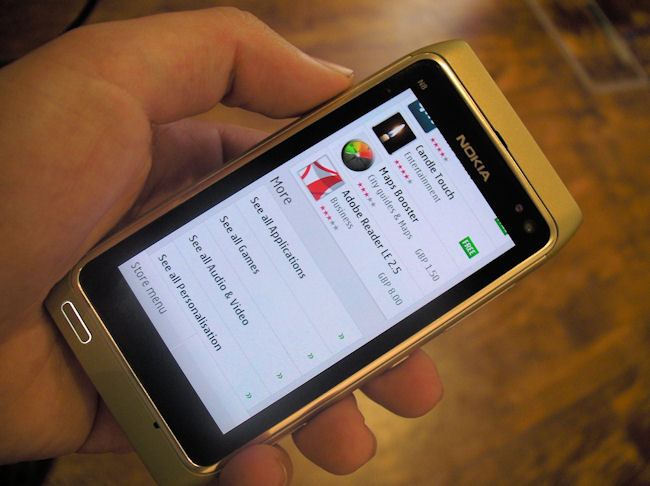 In the current client, the various types of content in the Ovi Store are accessed via the carousel tabs along the top of the screen. The new client switches to a listing approach, which is more consistent and intuitive. Again, this should encourage casual browsing of the Ovi Store.

In another logical move, 'Channels' (curated sets of content), previously hidden away under an Options menu, have been renamed 'Collections' and placed below the category (types) list. 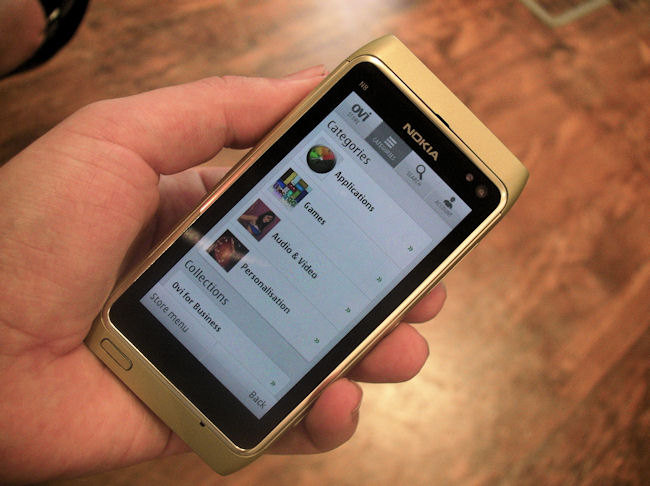 Tapping on one the content types opens a category list, which is headed by a 'See all Applications' link. Each of these opens up the relevant list of content. Compared to the previous client, this make categories (Business, City Guides, Entertainment, Music...) much more prominent. Previously, categories were little used as they could only be accessed via the Options menu. This should help improve discovery in the store as it will be easier for users to get to listings of specific content areas. 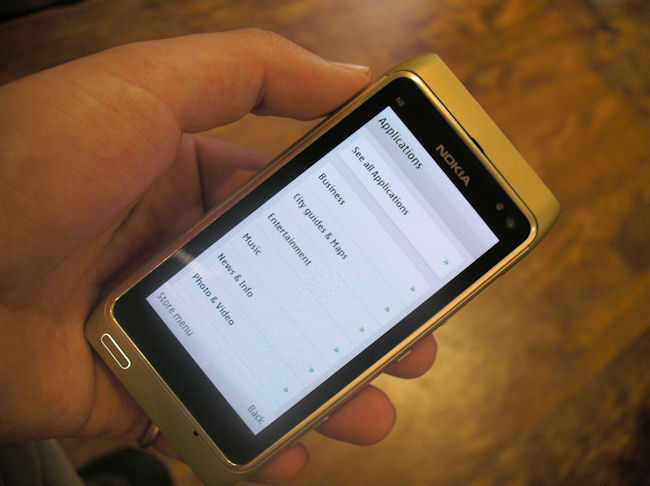 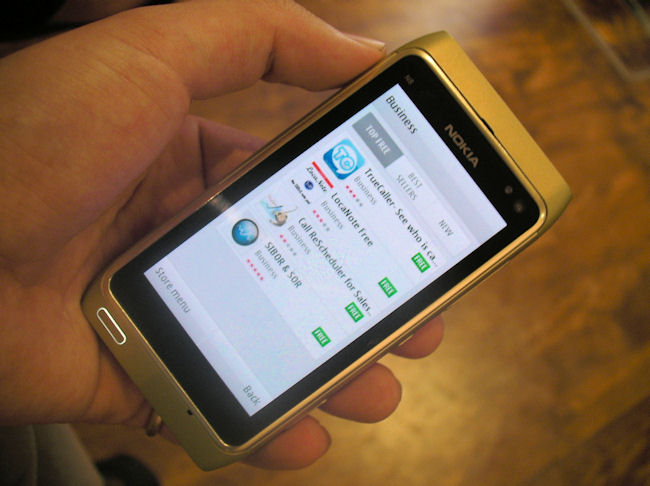 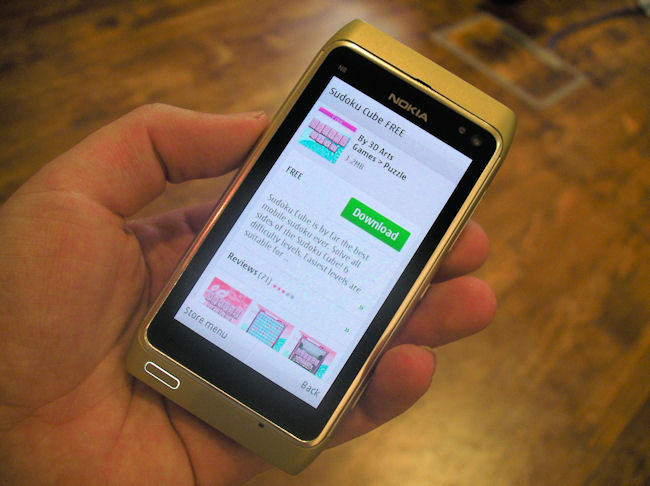 Navigation around the store is aided by the 'Store menu', which replaces the 'Options' on the left softkey. It's accessible, instantly, from anywhere within the Ovi Store client and offers links to the 'Store home' (home page), 'Categories', 'Search', 'Account', 'Help' and 'Exit Ovi Store'. 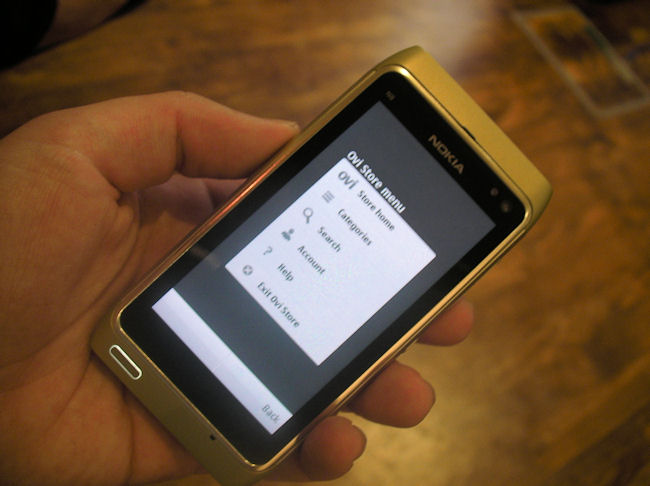 There's a definite increase in overall speed, which may partly be explained by the N8's hardware, but is also indicative of an overall improvement.

It's not really possible to draw any definite conclusions about the impact of the new client at this point in time. However, based on what we saw, both in terms of the redesign and performance and usability improvements, we would expect the new Ovi Store client to significantly increase download and usage rates.

Updated: In an earlier version of this article we noted that the new version was written in Qt. This is not the case. The Ovi Store client continues to be based on Web Runtime (WRT) technology. We believed that our information, which was provided during a Nokia developer event, was correct, when we originally published the article. However, Nokia have since reached out to provide some additional information on the new version of the Ovi Store client, including this correction on the technical details. We will be publishing a follow up piece on Ovi Store shortly.

It is quite telling that the performance and design improvements reinforced the perception that this was a Qt application. the new Ovi Store client does demonstrate that with care and attention to detail WRT based applications can provide an excellent level of performance and user experience.

We apologise for any confusion caused.