Having used a Nokia X6 for a few weeks, I became painfully aware of a few dozen dust particles and the odd small hair stuck under its capacitive screen. Read on for an explanation of how they got there and what was needed to both remove them and stop dust encroaching in the future.

First up, props to Tim Salmon (go follow him!), who lent me the device. It's tempting to blame the dust, shown below, on him(!), but as we shall see, the real culprit was at the factory in Hungary, where this particular X6 was made.

Yes, this looks awfully like dust ON the screen, but trust me, I'd cleaned the display - this is all under the glass!

From chatting to the guys at the Nokia Care Point, it seems that the top glass layer, which includes the capacitive sensor, has an ultra-sticky sealant strip on its back, for attaching to the main TFT display: 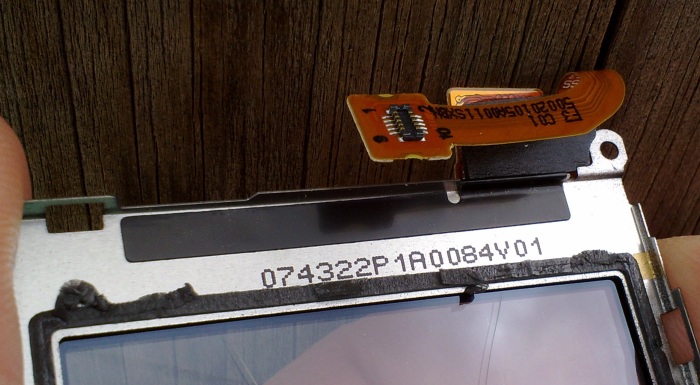 Note (what's left of) the sealant strip around the display area. Also note the capacitive sensor ribbon cable - not relevant here, but interesting anyway! Also note that this wasn't from our X6 but from a broken one (hence the cracks in the glass)

It seems that the glass and screen get applied together in the factory by a machine. And, in rare cases, the seal is not completed perfectly. Which means that dust can then start to leak in from the main phone body, an effect exacerbated (I suspect) by the use of a capacitive screen here, implying that electric charges are in play, however small, attracting dust even more.

The cure is not to peel off the glass, blow out the dust and reseal. Well, maybe that's the way the Carphone Warehouse would do it. A proper Nokia Care Point takes extreme steps to fix these things. In this case, on an electro-static bench with clean room gloves on, putting on a whole new screen (with new seal) and new phone sides, the latter because the original sides were too weak and a possible point of dust ingress. All the parts arrive in their own electrostatic jiffy bags and even the old, broken parts get stored in bags, should they be needed later by Nokia for investigative purposes.

It's impressive and one of the reasons why so many people love Nokia phones around the world. They're generally robust, not too expensive, do the job (if not as flashily as some!) and have a worldwide support and repair network that's, literally, second to none.