The Symbian Foundation today announced the Symbian^2 platform is being used in four of the seven Symbian based handsets announced by NTT DoCoMo a few weeks ago. The F-07B (Fujitsu) went on sale on May 21st; it features a dual orientation screen (swivels from portrait to landscape) and a 12 megapixel camera. The SH-07B (Sharp) went on sale a week later; it features a 12 megapixel camera with full HD video recording and is partially waterproof. The F06-B and F-08B will go on sale later in June. These are the first Symbian^2 handsets to ship worldwide.

NTT DoCoMo, Sharp and Fujitsu are using Symbian^2 with a customised UI layer (known as MOAP). The platform, effectively a variant specialised for the Japanese market, is developed co-operatively between NTT DoCoMo, Fujitsu and Sharp. These phones are 'locked-down' compared to smartphones in the rest of the world, but, as their specification suggest, are cutting edge in their home market.

Other Symbian manufacturers, such as Nokia, Samsung and Sony Ericsson, decided not to productise (use) Symbian^2 and are instead going straight to Symbian^3 from Symbian^1. 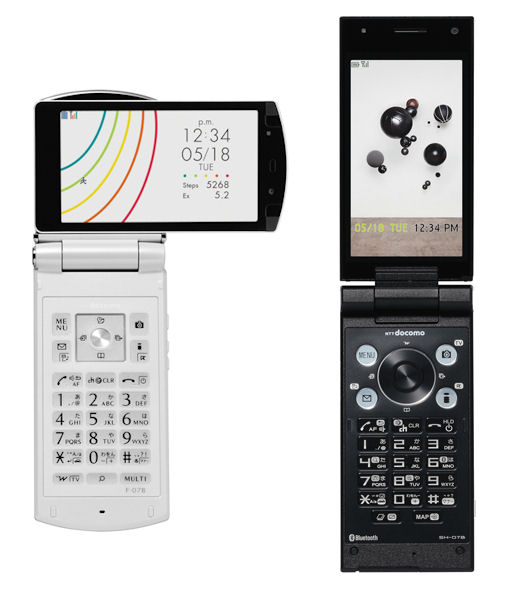 Incidentally this news would suggest that Sharp and Fujistu can be ruled out of the list of Asian manufacturers who might be producing the first Symbian^3 phone. Symbian^2 is likely to be the version of choice In Japan until the next generation platform (which is likely to be based on Symbian^4 or Symbian^5) is ready in late 2011 early 2012.

All the parties involved gave the usual positive statements in the press release:

"We are very pleased that the Symbian^2 platform is being used in the latest models manufactured by Fujitsu Limited and Sharp Corporation, and that the docomo STYLE series F-07B is the world’s first device based on the S^2 platform. Symbian^2 provides a wide range of compelling features for all Japanese mobile phone users to enjoy and benefit from. We will continue to promote the Symbian platform and its use in the Japanese mobile market," said Yoshimasa Miyake, Head of Symbian Foundation, Japan.

"NTT DOCOMO, as one of the founder members of the Symbian Foundation, has brought strong enthusiasm to launch our devices based on Symbian^2, the first platform release since the foundation’s establishment. I’m delighted and proud that this joint effort, together with our partner companies and Symbian, has come to fruition and the FOMA 2010 summer models are now hitting the market. NTT DOCOMO will continue to put all of our efforts into collaborating with the Symbian Foundation and its member companies to provide our market with attractive products and services based on the Symbian platform," said Toshio Miki, Associate Senior Vice President, Managing Director of Communication Device Development Department, NTT DOCOMO, INC.

"Fujitsu is very pleased to ship the first ever S^2-based mobile phone and also contribute to the Symbian Foundation as a board member. Building on this achievement and years of experience of developing on Symbian, Fujitsu will continue to develop the mobile phones which can meet the further demands of the market," said Minoru Sakata, President, Mobile Phones Unit, Fujitsu Limited.