The (unbranded) Nokia N97 'classic' was given a big update today, to firmware version 22.0.110, available right now Over The Air, as a 5MB download and shortly via Nokia Software Update. The previous firmware version was v21.0.102. Version 22 is a significant update because it includes Ovi Maps 3.3 with the free navigation, saving the user from having to use up around 10MB+ of the precious system disk C: for these two combined. More and an attempt at a changelog below. The N97 mini should also now see v12 firmware, which is equivalent, though I can't test this personally. 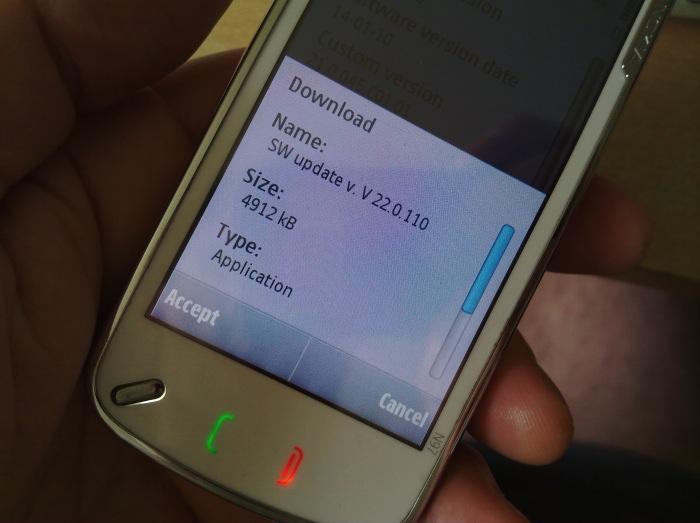 Of course, there are plenty more demands on disk C:, especially if you get sucked into installing everything in 'Sw update', but at least space isn't as tight as it was for v21 and before.

Although the N97 has User Data Preservation, meaning that you don't have to backup and restore data, we still recommend a backup (just in case) and, if you have a spare 30 minutes, a hard reset and restoring of user data anyway. Along with re-installing any applications. Yes, it's a minor hassle, but you'll get the absolute best performance out of the N97 this way and will be free of v21 system detritus.

You can backup to card inside File manager, or you can use Ovi Suite or PC Suite. Just be sure, in each case, not to restore 'Settings' - let the new OS build up its own system files and you'll have a much smoother ride.

At best case, if you do hard reset your N97, you'll initially have 55MB free on disk C: and almost 60MB of free RAM, both an improvement on previous firmwares.

I was rather dismayed to see that Maps 3.4 is still offered in 'Sw update' - if a user then applies this then they've instantly undone most of the point in updating in the first place. 8-( Oh, Nokia. 'Sw update' should come with a health warning....