Q1 2010 figures in for smartphones and phones

Always of interest are the quarterly stats summaries from the market analysts. The first figures are in, with Nokia and Apple making gains at the expense of 'others' in the smartphone world, and with Nokia losing out slightly in the battle for generic 'phones'. More info below. 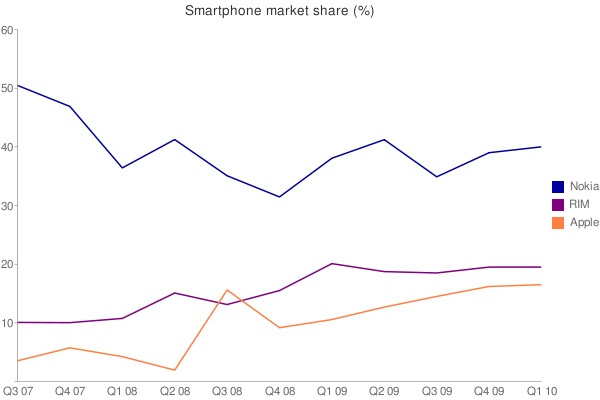 It is interesting to note that both Apple and Nokia have increased their market share at the expense of the 'others category'. RIM have continued to perform well, although their growth has slowed, suggesting they may be feeling competitive pressure. Heading into Q2 I would expect the trends to continue. Further ahead Samsung's smartphone (Bada) push, releases from Nokia at the high and low end, Android growth and the launch of the next iPhone will all have an impact, although it is difficult to asses the overall impact.

Overall percentage figures are somewhat misleading given the stratified nature of the smartphone market. Nokia is strongest in the low and mid tiers where some estimates put its market share at 70%. Conversely the high end is much more competitive and evenly split; the exact figure depends on where and how you draw a dividing line between the tiers. As ever when looking at such numbers consider the overall context.

In fact the very definition of a smartphone has been slipping for years and so it's also instructive to look at overall stats, also just in, this time courtesy of IDC. Nokia's overall market share has slipped two percent, year on year, to 37%, with Samsung at 22%, up 3% year on year, and LG holding third place at 9%. RIM and Sony Ericsson are at 3% world phone market share, while HTC, Apple and Motorola are all in the 'Others' noise... Notable here is the fact that RIM makes the top 5 phones manufacturers, displacing Motorola.

Tellingly, Nokia comfortably outsell their second and third place competitors put together, in both 'phone' and 'smartphone' worlds.