comScore have recently published a couple of press releases which contain interesting statistics about smartphone market penetration and mobile platform market share. For example, people are twice as likely to buy a smartphone in Italy than they are in Germany. Symbian's strong position in Europe is shown by market share figures of 47%, 55% and 74% in the UK, Germany and Spain respectively. The figures provide a contrast to the frequently reported US market share figures and demonstrate the degree of regional differentiation.

comScore's data is a count of subscribers (either contract or PAYG). It is not based on sales (as is typical in data sets talking about market share), but rather based on those actively using phones (effectively the installed user base). This, arguably, gives a clearer picture of the current market. Sales numbers are still useful, they can help reveal future trends at an early stage, but tend to be affected by episodic events (time of year and specific phone launches).

The retention period for smartphone devices in Europe is typically, on average, around 18 months (though this does vary by country). As a result, Android, because it has only become established in the last 12 months or so, may appear to be in a weaker position that it is in these numbers. As ever, with statistics, it is important to understand and consider the context when drawing conclusions.

comScore, in their press release, are highlighting growing smartphone adoption and the varying rates in various European countries (70% year on year growth in the UK, 32% average in the EU 5). However, there is also a variety of data in the release, which comScore have provided as a taster, which is worth examining.

Market penetration is a measure of how many of the total mobile phones being used by subscribers are smartphones. Globally, the average is around 14-16% (Q4 2009), but can vary depending on definitions used. This figure has grown significantly over the last few years and is expected to continue to do so as more smartphones are sold in the mid and low end of the market.

Smartphones by platform in Europe

The data below is a 3 month average (ending January 2010) showing the share (%) of smartphone subscribers by platform in the UK, France, Italy, Spain, the EU 5 (an average of the previous European countries). The US data from an earlier comScore press release is also shown. 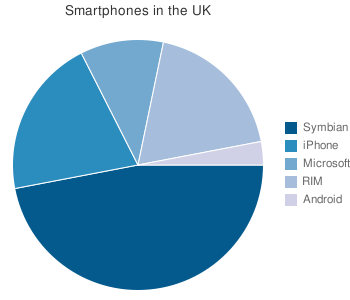 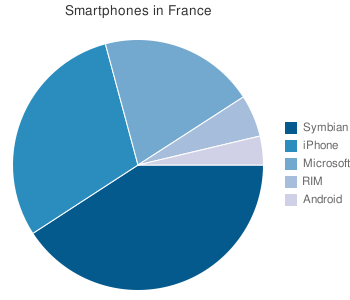 Symbian is the leading platform in the UK (46%) and France (40%). In the UK, the major competition comes from RIM (18.7%) and Apple (20.5%), in France it is Apple (29.9%) and Microsoft (20%). The UK has one of the more competitive markets for smartphones and is a relatively level playing field in terms of consumer choice. All the major platforms' high end devices are available on similar terms (devices for free on £35+ per month 18 month contracts) and marketing campaigns across the board. 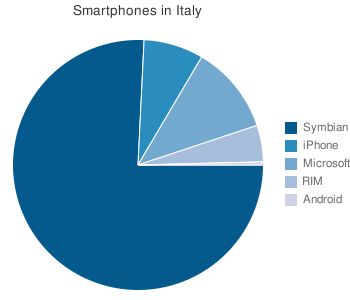 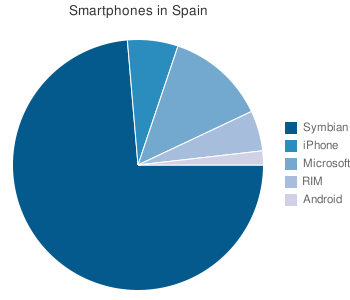 In Italy and Spain, Symbian dominates the market with around 75% share. The data shows a strong contrast from the UK and France. It is illustrative of the differences within an area, Europe, that is sometimes considered homogeneous when reporting statistics.

Country culture (preferences) and degree of market entry for the respective platforms will play the primary role in accounting for differences. Due to higher overall market penetration, as discussed above, both countries have a higher proportion of mid and low tier smartphones as a total of the smartphone market, compared to other countries (78% in Italy, 62% in the UK); given Nokia's strength in the mid and low tier (5800, 5530, E63, etc.), the majority of such phones are likely to be Symbian-powered, which, perhaps, gives Symbian added strength in these markets. 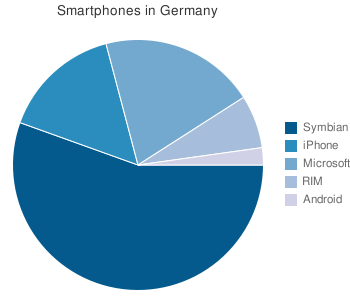 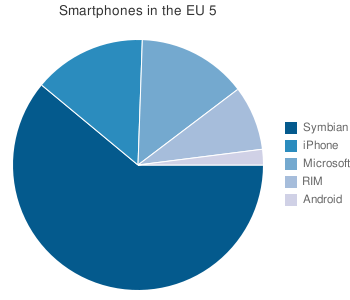 Germany's platform figures are somewhat similar to France's. It shares both a similar market penetration (relatively low) and a higher than average share (19%) for Microsoft (Windows Mobile) devices, but the iPhone has a small share (15.3%), with Symbian taking up the slack (55%). Germany (and to a less degree France and the UK) have a legacy of operator success in pushing own brand (and more recently HTC-branded) Windows Mobile devices.

Looking at the EU 5 as a whole, it is clear that Symbian is, by some margin, the most dominant smartphone platform (60.9%); double the size of its two nearest rivals combined. Apple's iPhone just edges into second place (14.5%), from Microsoft's Windows Mobile (14.1%), with RIM in fourth place (8.3% - a strong contrast to its market position in the US) and Android in fifth place (2%). 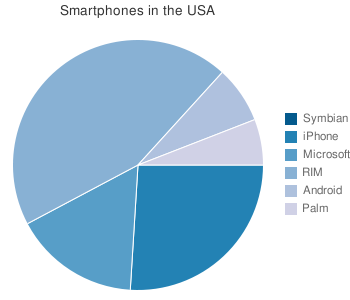 The data for the US shows the gulf between Europe and the US. RIM is the market leader with 43%, iPhone is second with 25.1%, Microsoft is in third with 15.7%, Android is fourth with 7.1%, Palm is fifth with 5.7% and Symbian doesn't register in comScore's numbers (in reality they are just a few %). RIM is the best selling platform in the US, but its dominance can also, partly, be explained by maturity in the market (compared to iPhone and Android) and longer device retention periods than for other platforms.

The US is an unusual market: with a few exceptions, the rest of the world generally follows the European pattern (or more extreme versions). If anything, like Japan and South Korea, the US is a market apart; something of an odd man out. It is worth remembering this when you see reporting that draws global inferences based on US data.

The data below is for all mobile phone subscribers (i.e. not specific to smartphones), but once again illustrates regional variations in what people are using their phones for. 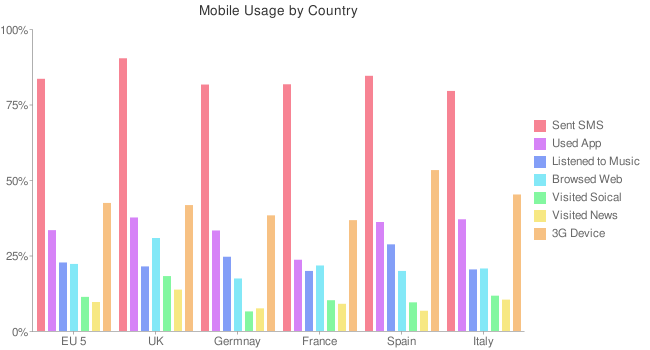 These statistics shed some interesting light on the European smartphone market, especially for developers. Symbian continues to provide the biggest market opportunity in Europe by some margin. Any service or application provider wanting to target a significant portion of smartphone users in Europe must provide a Symbian application.

However, it should be noted that numbers alone are not enough. Distribution systems and a consumer willingness to buy are also important; this is why initiatives such as the Ovi Store and PlayNow Arena are so important. With that said, the mobile usage statistics in Italy do show the highest application usage in Europe (37%), which given Symbian's dominance there, suggests the widely held belief that Symbian users do not use applications may not be true.

Regional variations within Europe are well worth considering when allocating resources for future developments. For example, it might be worthwhile localising content into Italian since, numerically, it is the biggest smartphone market in Europe.

Clearly figures do vary, for example Nielsen released a report yesterday showing that US smartphone penetration was 21% in Q4 2009. There are some issues around how you define a smartphone, which can lead to different numbers. As ever, the context of what is being measured and the method is very important in assessing accuracy and drawing any meaningful conclusions.

All the original data detailed above can be found in these two comScore press releases.