As noted in Rafe's Maps interview thread, Nokia isn't keen to put resources behind creating a version of Ovi Maps 3.3 with free voice navigation for older S60 3rd Edition FP2 and FP1 (and vanilla 3rd Edition) phones. A good question is why Nokia doesn't then just make existing navigation licenses free, thus having much the same effect. It seems that they've gone much of the way to 'free' for older devices, with even a full 'Drive Europe' license now only costing 10 Euros for a year - this presumably to help cover admin and server costs. Photo proof and more below. 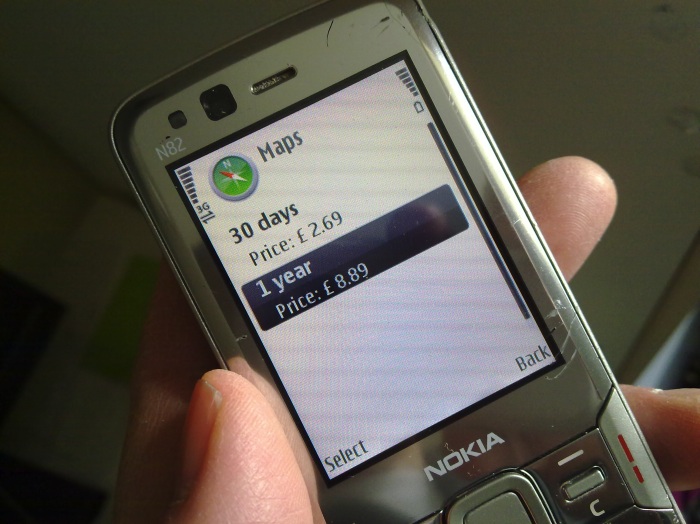 The battered editorial N82 from 2008, showing the price of a full annual Drive Europe license

People will still ask 'Why couldn't the licenses just be made totally free?' - but I think we have to throw Nokia a bone here - there are substantial admin and infrastructure costs to maintaining an online mapping and routing service, handling license retrievals, and so on, and in my opinion 10 Euros for a full year across an entire continent is still spectacular value. Competing phone-based navigation systems are still in the 70 Euro to 130 Euro a year bracket, and the purchase prices of standalone devices are higher still.

You'd spend more than 10 Euros by ordering coffee and a muffin for 2 people in a cafe - and here we're talking about unlimited journeys, everywhere you're likely to travel, with full in-car real time voice navigation, for a year, for less money.

A more interesting question is why Nokia haven't actually told anyone about the big price drop. Comments welcome if you noticed when it actually happened!