Samsung's long (oh so long) awaited i8910 HD firmware update has just been released. Firmware JB1 is now online via PC Studio 7, as the screenshot below shows. Improvements include kinetic scrolling in most (but not all) parts of the interface, major improvements to Web, faster operation and many bug fixes. Comments welcome if you notice something else new. 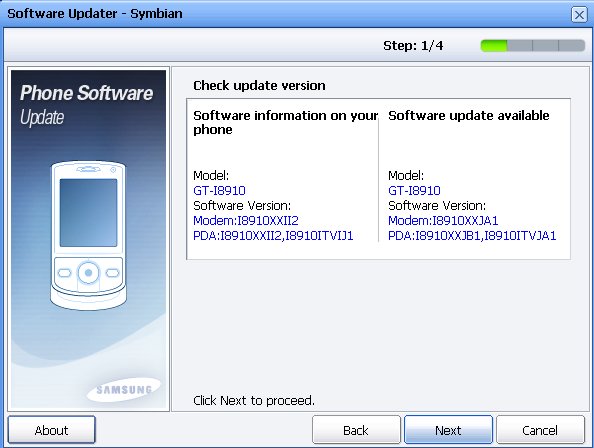 As ever with these i8910 HD updates, there's no Nokia style User Data Preservation, so back up fully and be prepared to put all your data back and then reinstall all add-on applications.

[If, like mine, your unbranded i8910 HD came with Italian as the default language, note that you'll have to pick 'Regno Unito' as your location, followed by Settings/Phone/Language (obvious, despite the language differences) etc.

Sadly, Samsung has made worse the already critical lack of flash memory on disk C: By default, you now only get 17MB free after the update/reset. This is utterly ridiculous and is a huge impediment to power users while causing potential chaos for inexperienced users. If I remember rightly, the previous firmware allowed the user some 30MB or so free, so things just got dramatically worse. Quite understandably, Symbian OS starts to complain if it's got less than 10MB of workspace free for temporary files (e.g. web cache) - starting with 17MB free is just Stupid with a capital 'S'. And galling, in view of the fact that skilled hackers elsewhere in the world have managed to cook up i8910 HD firmwares (don't ask how) which have up to 100MB free. Samsung, you dropped the ball here.

(via Samsung HD blog IT)