Much of the buzz around the Symbian platform in the past year has been around open source and the move to Qt and a new UI in Symbian^4. However there is lots of on-going development in other areas too. One example of this is the Social Mobile Framework (SMF), a major contribution proposal to the Symbian platform by Sasken. In this video we talk to James Aley of the Symbian Foundation who explains what the SMF is and the potential benefits to developers.

The SMF is a new package (part of the platform) that is being targeted as being available in the Symbian^4 release. It is a framework for developers to use social networking services and content via a generic interface (i.e. not specific to a particular service). This will allow for much greater integration between Symbian phones and the content and services available on social networks and web services (friends lists [social graph], status updates, videos, images etc etc).

For example in the Contacts application the SMF could enable social address book functionality (sync to Facebook, integrated status messages and so on), in the Calendar application it could automatically pull in event and birthday information, and in the music application it could connect to recommendation services and share your favourite tracks with your friends.

It is worth noting that the SMF itself is an enabler and that additional work would be needed in current applications to take advantage of the new capabilities.In their contribution proposal Sasken suggests it may contribute some examples itself, but wider adoption will need uptake and commitment from other package owners. Similarly adoption by third party developers and service providers would be critical in the longer term.

The SMF is an interesting example of the Symbian Foundation's open philosophy in action. It is being developed, from the ground up, completely in the open. Both Sasken and Symbian are very keen to get additional input and contributions.

The Social Mobile Framework will provide a server and associated generic APIs for different types of services (e.g. social networking, image sharing, authentication, product search). Plug-ins for specific social networks (Facebook, MySpace, Twitter and so on) would be developed. These plug-ins would tie into and use the generic SMF APIs (e.g. a Facebook plug-in might tie into both the generic social networking and image sharing APIs); the advantage of this approach is that it requires less work to develop the plug-in (the common elements are provided by the SMF).

Applications would be clients of the SMF server and thus able to access social networking services and content. Any application, whether built in or developed by a third party will be able to make use of the SMF; it means there is a single point of connection to such services. This is the key advantage of the SMF - it provides a platform level integration into social networks and web services for native applications. 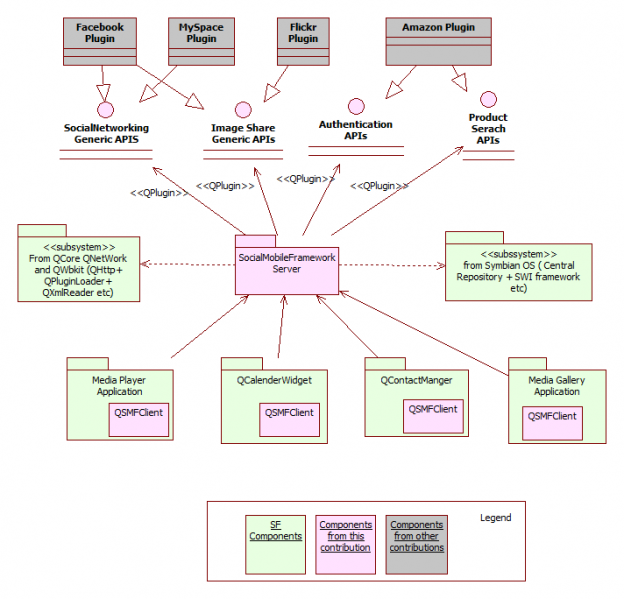 This is in sharp contrast with the current situation; each application has to make provision for handling and processing connections to such services itself. This tends to create create relatively high barriers to entry and is inefficient. Moreover most application accessing social networking functionality do so directly - as stand alone clients only (e.g. Facebook client, Twitter client) - without having full integration into phone functions and thus miss many of the unique opportunities inherent in mobile.

The SMF opens up the opportunity for integration with social network and web service resources to become ubiquitous throughout the platform. In the future the SMF means that, potentially, you will be able to switch on your Symbian phone, enter your social networking credentials once, and immediately start utilising deeply integrated and contextually aware social networking and web service functionality across a full suite of applications.