Escarpod to be integrated into Symbian^3 and Symbian^4 ?

Escarpod, the third party Open Source podcast gatherer and player, originally written for UIQ and available for S60 in beta form for a while, is now the source of a Contribution Proposal to the main Symbian Foundation code base. Effectively, this means that future Symbian devices should have a podcast client, in the wake of Nokia choosing not to contribute their own proprietary Podcasting application. Read on for links and more information.

With the rise and rise of podcasts in the wider world, Nokia's Podcasting utility, launched in 2007, was the right tool at the right time - set up with a known good Wi-fi access point (e.g. your home network), you could leave it to grab new podcasts from your chosen feeds completely autonomously. It meant you were never short of good spoken word listening and Podcasting then shipped on every Nseries S60 phone since then. It also made it onto the business-focussed E71, E75 and some 'numbered' Nokia S60 smartphones and the general thought was that Podcasting was now established as 'part' of S60 going forwards.

However, you'll have noted that Podcasting was conspicuously missing from the Nokia E55, E55 and E72, leading to suspicion that something screwy was going on. There are two theories, though of course only Nokia really knows. The first puts it down to 'marketing', guessing that the E52, E55 and E72 product managers deliberately omitted Podcasting so as to give one more reason for differentiating the Eseries range from the Nseries. I don't really believe this - since when does a company cripple its own products deliberately and give loyal customers a reason not to upgrade/buy? In addition, there are plenty of other consumer touches on the likes of the E72, not least the Nokia Music Store. And, when you start Music player and refresh its library, it even says 'Searching for music and podcasts'.

Which leaves theory two: that there's a technical hitch. It's entirely possible that Podcasting was written long enough ago (best part of four years) that the original author has moved on and the Eseries team couldn't get Podcasting working in their own builds of S60. A shame, but I suppose it's always possible that the app will return in a future firmware update.

In any event, Nokia has chosen not to include Podcasting in the code it has contributed to the Symbian Foundation (look here) - either because of a problem with licensing issues (re the aforementioned moved-on author) or because Nokia wishes to keep Podcasting as an Nseries 'value added extra', as it has every right to do.

(It's worth noting that the Sony Ericsson Satio, running S60 5th Edition, has no Podcasting client for these reasons, while the Samsung i8910 HD does because Samsung seem to have chosen to explicitly license the Podcasting source code from Nokia - they then compiled it themselves.)

Which leaves a gap for the future. Not a huge one, but an important one, for Podcasting's biggest users are the tech elite, bloggers and early adopters who make the most noise on the Internet.

Now, in the meantime, Escarpod was started as an open source project (the name's a pun on the French for 'snail'!) to bring audio books and podcasting to UIQ, the existing 2007 touch interface on Symbian. With the fairly swift demise of UIQ shortly afterwards, the developers (Sebastian Brannstrom, Lars Persson and Lars Olsson) knocked up a version of the application for S60 and this works fairly well, if quirkily and still labelled 'alpha' status, to this day, even on S60 5th Edition phones. 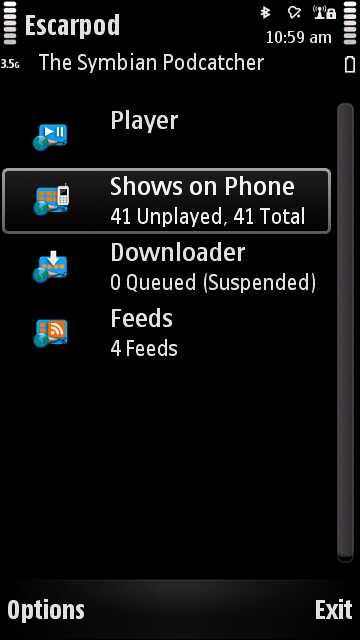 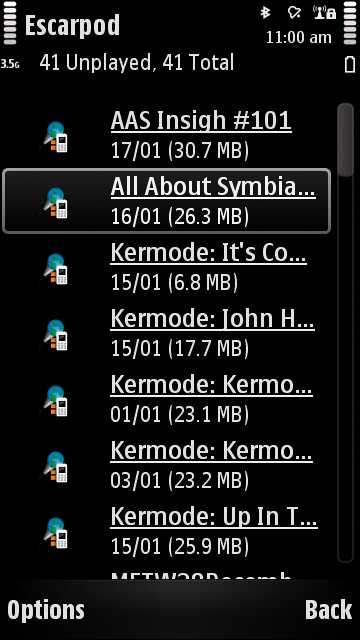 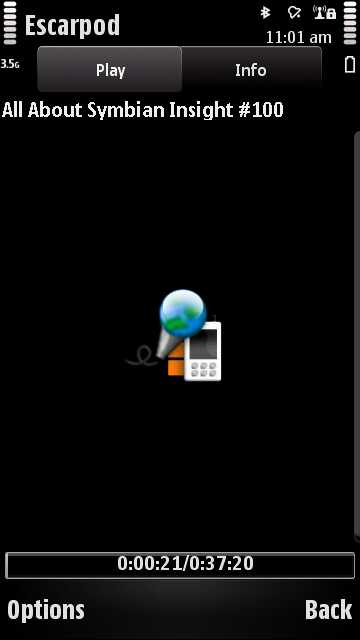 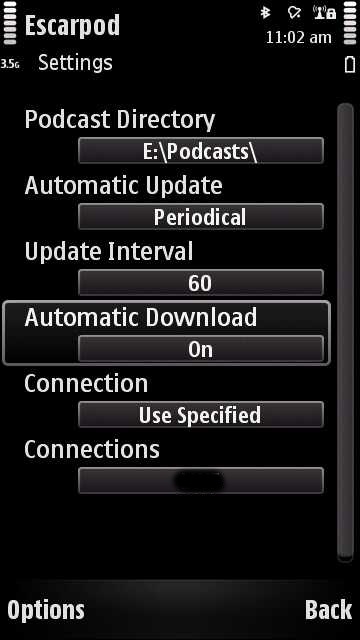 Thankfully EmbedDev (including the original Escarpod developer) has stepped up to the plate and has now proposed that the application be renamed, refined and added into Symbian^3. It's not just a proposal, either, since EmbedDev now has two people working on the package (now called 'Podcasting') more or less full time, aiming to get a stable version ready for the end of February, when Symbian^3 will be feature-complete.

Looking to the future, a reworked version is planned for Symbian^4, with, of course, a new Qt-based user interface.

Credit to all involved - an interesting story on all fronts and a great potential outcome.

PS. Not wishing to leave Nokia out, it's entirely possible that they'll continue to use their version of Podcasting on some handsets in the near future, though, as hinted above, I suspect that with the rewrite needed by Symbian^4, that even Nokia will then switch to using the Open Source Podcasting described in this story.

Filed: Home > News > Escarpod to be integrated into Symbian^3 and Symbian^4 ?