The times, they are, as the bard quoth, a changin' - Google Maps Navigation now provides free turn by turn voice instructions on Android-powered phones in the USA, and it's only a matter of time before the licensing restrictions and map rollouts get sorted for real time navigation in many other countries. And all for free. But this still leaves a window of opportunity for Nokia to step in and change this landscape in an even bigger way - right now. And sell a truckload of phones in the process, worldwide. Read on for my thoughts.

As I understand it, Google Maps has been expressly forbidden, by the Map license owners, to provide real time navigation in its free Maps application for mobile phones. However, Google has been building up its own map sources over the years and has now felt confident enough in these to drop licensed maps in the USA and use its own, meaning that it can add as much functionality as it likes. In this case, starting with real time voice navigation on all Android-powered smartphones.

It's very likely that, over the next year, this functionality will spread to half a dozen other major countries (the hacks are here already), along with a number of other smartphone platforms. Which means that, by this time next year, Nokia's Ovi Maps might find itself with a direct competitor which is absolutely free. And which, if we're all honest, has much better underlying sources of points of interest and is much better at finding things in the real world. 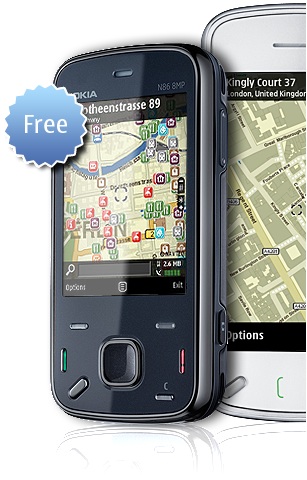 With all the negative publicity Nokia and Symbian have been getting in the last few months, here's my (100% serious) proposal to Nokia:

In other words, head off the competition before it even gets started. And set in motion the huge PR plus that would be fixing in peoples' minds that every Nokia phone with GPS also comes with completely free sat-nav. Yes, there would be a small hit financially, in that Nokia would lose a year or so's worth of individual Navigation subscriptions. But I'd warrant that the profit from the extra handset sales, not to mention the free publicity and ongoing goodwill from the public would more than offset this - maybe by a factor of ten.

There would still be extra premium services and local guides that Nokia could sell off the back of Ovi Maps - I'm only advocating that the high profile 'killer' function be free.

Nokia managed to turn its phones into the most popular music players and cameras in the world, not to mention seeing off wristwatches and other electronics in the process. I suggest that it's time that an Ovi Maps manager took a single, easy decision now and in one fell swoop, in a matter of seconds, made Nokia the biggest sat-nav maker in the world by a big margin.

"Your phone has Ovi Maps? It now has free sat-nav as well"

Steve Litchfield, All About Symbian, 30 November 2009