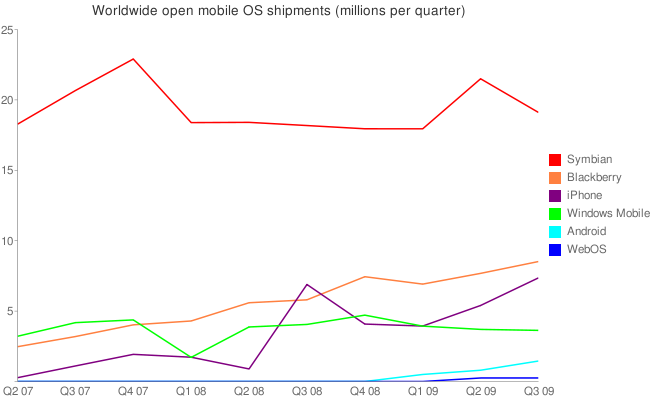 It is well worth noting that comparing results quarter on quarter or year on year can be somewhat misleading as smartphone shipment numbers are still relatively cyclical (e.g. iPhone shipment numbers in Q3 2008 and Q2/3 2009 co-incide with the release of new models). Similarly effected are market share number (e.g. Nokia's Q3 results were particularly poor in Q3 2008, giving a more favourable comparison to 2009).

While Windows Mobile's market share is down significantly for Q3, the launch of Windows Mobile 6.5, especially in Samsung's Omnia range, at the beginning of Q4 may mean this trend is reversed.

The most impressive overall performer is RIM who have continued to grow their sales volume and market share. However questions do remain over the future of their software platform.

"The smart phone market continues to hold up pretty well,” commented Canalys senior analyst Pete Cunningham. “While growth has undoubtedly slowed, it is still outperforming the overall mobile phone market by some margin, as well as driving data revenue for operators, and smart phones are ushering in a range of changes in user behaviour when it comes to what people actually do on their phones.”

"Nokia remains the smart phone volume leader by some distance and its share is stable year on year. In Q3 it suffered somewhat from component shortages as suppliers reduced capacity due to the overall market slowdown, but while its smart phone volume was down 10% in EMEA year on year, in the APAC region 29% growth put it comfortably ahead of the market average. “Much of the recent growth in the smart phone market has come in the high tier, with products like the Nokia N97, the iPhone and the BlackBerry Bold,” observed Rachel Lashford, MD of Canalys APAC. “Vendors are now beginning to drive smart phones into a new segment, with products such as the Nokia 5230, targeting consumers who are new to smart phones. We expect this to boost growth and penetration of smart phones substantially over the next two years."