[Story updated] Yes, it's out. For some product codes at least, with a changelog below. The next-gen Nokia N97 v20.x.019 firmware (a.k.a. PR 2.0), the biggest, most ambitious and most eagerly awaited firmware update in Nokia's history, is now available via Nokia Software Update. In short, RAM management is better and you effectively get a lot more flash memory on C: (provided you go through a little wipe/update/restore data effort) - plus the delights of kinetic, intuitive scrolling in all applications, transforming the S60 5th Edition experience, and a mountain of smaller fixes. See below for the changelog and comments. 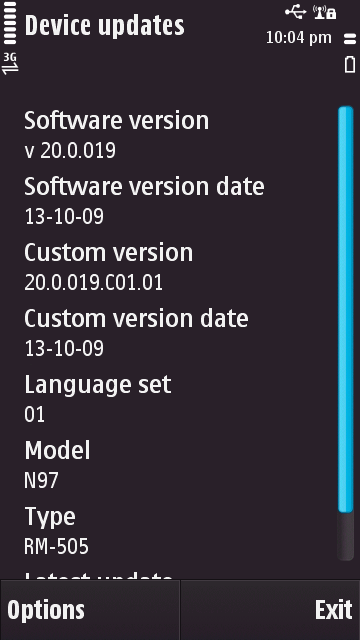 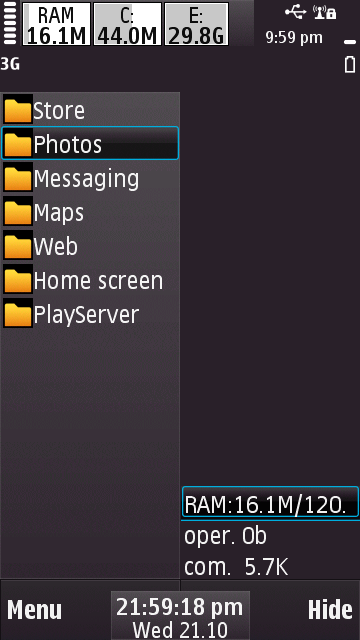 On the right, showing N-Gage, Maps, Web, Photos and Ovi Store, all loaded in RAM at the same time - with 16MB still free - a definite improvement!

You can check for updates by going into the 'Sw update' application in your phone. Although the Nokia N97 does include UDP (User Data Preservation), and you should be able to apply this update over the top of your existing v11 or v12 installation, for anyone with any technical knowledge, I'd strongly suggest taking a slightly longer route.

Firstly, I'd suggest a backup (to memory card or PC), just in case. And then a sync of your data (e.g. to Outlook or Ovi or Google), just in case(!) Then, if you don't want to apply the update straightaway, wipe your N97's C disk with the usual *#7370# (default password 12345) and THEN apply the update. Then you can restore your data and any document files from memory card, PC or online source in the usual way.

Doing what I suggest might seem like a pain, but this is a major operating system update and you will end up with a faster, leaner phone with more space on C: free (around 55MB flash disk free on a virgin v20 N97).

Improvements in firmware 20.x.019 are: (the x varies according to region and product code)

What's missing from the v20 firmware:

Comments welcomed on all aspects of this new release.... [FX:Steve lights the blue touchpaper and retires.....]