Juniper Research, a telecoms analyst firm, recently released a report on Mobile Open Source Operating Systems, which predicts open source platforms will remain predominant and that, by 2014, Symbian handset shipments will increase from 87 million to 180 million per year, with Android and Limo adding 40m/year extra and taking the open source total to 220 million/year. Such analyst reports are educated guesses, but it does provide an antithesis to the 'Symbian is doomed' line that was popular, in some quarters, earlier this summer and a good jumping off place for some further platform thoughts. Read on for more.

A disclaimer: Future market share figures in analyst reports are generally based on the results of a predictive model (spreadsheet) constructed with a number of inputs and assumptions. There's no special 'secret input' beyond experience and an understanding of the industry; in general there's no extra information on shipments beyond that which companies make publicly available. As such, reports that look at future market share are notoriously inaccurate. For example this 2006 report, from The Diffusion Group, predicted that Linux (26%) and Windows Mobile (29%) would overtake Symbian (22%) by the end of 2010 (and this is by no means exceptional).

The Juniper report suggests that Symbian market share will remain flat at around 50%, a figure which Symbian itself has mentioned in recent media interviews. Further, it envisions combined Android and Limo shipments of 40 million. These figures might be considered a little low, but the mobile platform market is currently more unpredictable that it has been for several years. 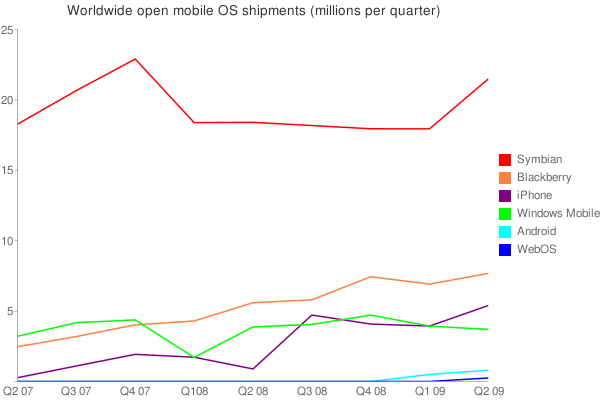 Market share figures (based on Gartner Data) - where next?

While Android is the current platform poster boy, amongst geeks, it has yet to achieve significant shipments and faces some unanswered questions around long term fragmentation and commercialization. Furthermore, the release of Vodafone 360's dedicated handsets last week (H1 and M1), which run Limo R2, point to increasing competition for Android. The Limo Foundation has the backing of 3 major UK operators (Telefonica, Vodafone and Orange) and Android may find itself facing tough competition from operator specified and controlled Limo handsets in the UK and other markets.

Symbian retains the strong backing of Nokia which make it, de-facto, the dominant player. 2011 will see the release of Symbian^4 and the completion of the move to open source, which could see a resurgence of interest from other manufacturers. At the same time, it will need to prove the workability of its open governance model in a fast moving mobile industry. Its strength is in its ability to effectively address the mass market, but the high end remains important for device profits and mindshare. It will continue to face intensifying competition there.

At the same time, the closed source platforms will continue to be active. RIM face an uncertain long term future with the Blackberry OS and related developer offerings, but such obstacles should be set against its dominant incumbent position as the enterprise solutions provider, especially in the US. Windows Mobile will be looking to rejuvenate itself and increase its consumer appeal with Windows Mobile 7. With 6.5 providing a possible avenue for cheaper mid-tier devices, the commitment of Microsoft to the mobile market should not be underestimated.

Apple will continue to develop its iPhone line of devices, with a key question being whether it will be able to move away from its 'boutique' status and address the mid tier market while maintaining its momentum at the high end in the face of fiercer competition. Palm and its WebOS is likely to need further funding to survive and its long term future is dependent upon the creation of a strong 'boutique' brand with a continual flow of innovative devices and software.

Rafe Blandford, All About Symbian, 2 October 2009