The world's going megapixel CRAZY and I feel like crying

As you'll see from the photo below, 12 megapixel camera phones are now starting to be sold on the High Street. On the face of it, more is usually better in a specifications battle, so why should I be so irritated by the latest battlefront? Read on for my thoughts on why the entire phone market is being somewhat misled. 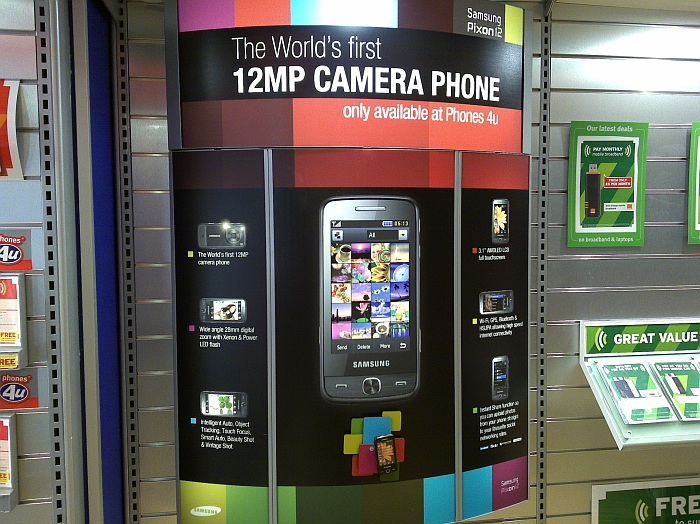 And so phones are now being sold on the strength of '12 megapixels'... You may remember my Camera Nitty Gritty feature on The Megapixel Myth? Looking at image samples from different camera phones, I concluded that 3 megapixels is enough for the typical photos, with perhaps 5 megapixels for those wishing to crop and do image processing later on. The very thought of shooting a snap of your dog or friend down the pub or a nice flower at 12 megapixels horrifies me, from the standpoint of elegance and simplicity. It's just way more detail that any buyers will ever need:

In addition to the maths simply not making sense, there's also not much point in making the resolution so high when the sensor size (in inches/cm) and optics are so comparatively weak (relative to those in a standalone camera). You'll end up with a photo that has 12 million pixels but no better actual detail and no better handling of shades of light and dark than a good 5 mp or 8 mp camera phone with decent (e.g. Carl Zeiss) optics. And take the light levels down, such as in the evening and indoors, and you've simply got 12 megapixels of low light noise*...

Will the ne'ersayers like me have any effect on a world of marketing gone mad? Of course not, I'm just a 'voice in the wilderness'** crying out that the world's gone quietly mad. Would I rather have a phone with a 12 megapixel camera, or one with a 3 megapixel camera, a qwerty keyboard and twice the battery life for the same purchase price? It's really not a hard decision.

And don't get me started on camera phone 'gimmicks', such as smile detection.... that's a rant for another day, I feel....

* Though, admittedly, the example phone mentioned, the Samsung Pixon12, does have Xenon flash, so low light shots shouldn't be too bad in terms of overall illumination...

Filed: Home > News > The world's going megapixel CRAZY and I feel like crying