Version 1.1 of Skyfire, the mobile browser that aims to offer a 'PC-like' browsing experience, is now available. The update delivers a number of significant improvements including zooming and scrolling optimisations, updated reconnect behaviour, better recognition of mobiles sites, and support for legacy WAP sites. Read on for our short initial preview.

Skyfire, through its server side technology (in effect a proxy browser on steroids), aims to deliver a 'Web browsing experience, exactly like PC browsing'. Early versions of Skyfire mostly lived up this promise, offering superior page rendering and full video support, but there were some obvious compromises around performance and usability. One of the most notable amongst these was the delay when zooming into a page area and moving around a page.

With the 1.1 release of Skyfire, the most notable improvement to the Symbian version of the client is the improvement in scrolling and zooming. When you load a page, Skyfire initially displays it in 'zoomed-out mode', you then choose which area of the page to zoom in on. When you zoom in, the area in question is initially pixelated, but then is sharpened progressively. This process now happens in roughly half the time it did before (varies on different pages), the whole process is also smoother as there's more of a transition effect. Similarly when scrolling areas of the page, loading as you go. As with zooming, this process is now faster and smoother.

The overall effect of this improvement is to significantly reduce the time it takes to move into and around a page. It is particularly noticeable when you're skimming through web pages rapidly. The only major waiting time with Skyfire is now the initial page load, but this, as before, is usually significantly quicker than the built in browser thanks to the custom proxy compression inherent in Skyfire's server side approach. 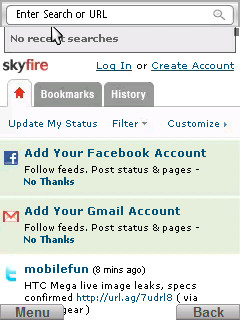 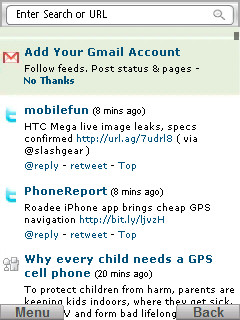 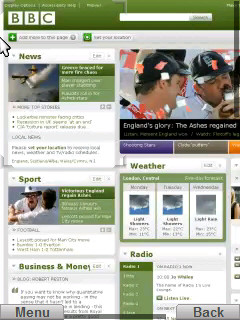 The second major improvement in this release is the software's ability to identify what is a mobile site (compared to the 'full site). If the browser thinks you are viewing a mobile site it will show you a 'zoomed-in' version as opposed to the normal 'zoomed out' version. This makes is quicker to browser mobile sites as it bypasses the need to select an area of the page to zoom into. Identification of mobile sites is not perfect, although some of this is undoubtedly down to server side user agent redirects. 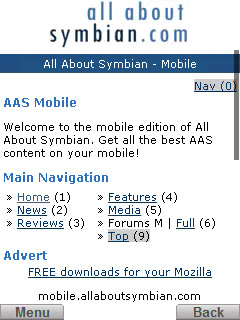 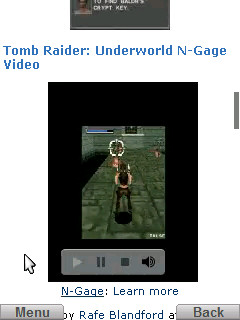 Another significant improvement is the handling of reconnect situations. Previously, when a connection was dropped (due to inactivity, or moving out of a hotspot area, or reception area) reconnection was not always handled elegantly. With the 1.1 release this has been improved, with the client making automatic attempts to reconnect when needed. Just as crucially, there's now also an indication (the page is grayed out) that page interaction is limited (i.e. no connection available).

Skyfire 1.1 also has much improved support for WAP sites. This may seem like yesterday's technology and browsing a WAP site with Skyfire does feel like overkill, but there are still a surprising number of mobile sites and services that are only available through WAP, so it is a welcome addition to the software's capabilities. 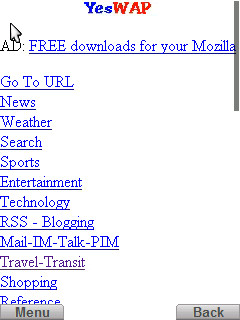 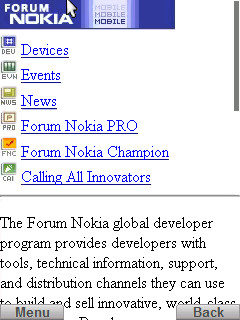 Skyfire is the only mobile browser that is able to deliver support for a full range of plug-ins (Flash, Silverlight, Quicktime, and Java). These are most commonly used for delivering web video, but have many other use cases too. Flash might not be as popular as it once was for site navigation elements, but there are still plenty of web sites out there that are unusable without Flash support (mobile device manufacturers, somewhat ironically, seem to be particularly guilty in this regard).

Moreover, by offloading the hard work to the server, Skyfire usually has far better performance than other mobile browsers, even if they do support the plug-in in question. This is an area where Skyfire already excels, but version 1.1 improves things further by updating to the latest versions of various plug-ins. 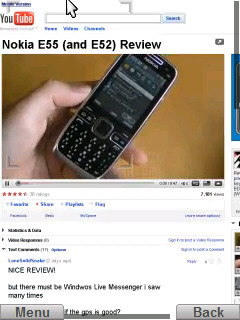 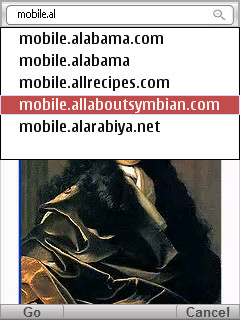 Finally, it is worth noting that the install file for Skyfire 1.1 has been shrunk down to around 660kb, from 850kb in the previous versions and from multiple megabytes in pre 1.0 releases of Skyfire. This makes Skyfire a more palatable over the air download, but also underlines the development team's continuing effort to optimise the client.

All in all, Skyfire 1.1 is a worthy upgrade for any existing user, especially for the improvements in zooming and scrolling. In the past, I've said Skyfire works best as a companion browser; used as a secondary browser for PC-optimised or multimedia rich sites.

I still think that remains true for version 1.1, but, for many, the ratio of use will shift in Skyfire's favour; in other words, you'll find yourself using Skyfire for a greater proportion of your mobile browsing needs than before. The extent of this will depend on device you use and the type of browsing you do. For example, recently released S60 devices (N86, E52, E55 etc.) may find fewer reasons to use Skyfire due to the improved speed and updated WebKit rendering engine found in version 7.1 of the S60 Web browser that ships with these devices. However, for earlier devices, Skyfire offers the opportunity for very significant improvements in browsing performance.

If it were not for the fact that Skyfire is unable to intercept hyperlinks inside other applications (e.g. in an email or text message) then a complete switch to Skyfire would not be out of sight, at least for some users.

NB. There's still no support for S60 5th Edition, we're guessing that addressing all the improvements above were the first priority for the developers - hopefully work can now be finished on a proper touch/5th edition client.