The Nokia Booklet 3G and the Symbian Ecosystem

Somewhere there's a bundle of ex-Symbian employees quietly muttering “I told them the way forward was a two-box solution....” What to make of the announcement of the Nokia Booklet 3G (beyond the fact that they're consciously avoiding the term 'netbook', even though every single post, tweet and message about this device is going to call it the Nokia Netbook)? Read on for my thoughts on this new mobile device...

First up, this is not going to be another 'nail in the coffin of Nokia using Symbian' – although I'll place good money on the sites that will run with that as their headline. By going with a Windows-based OS (my money is on Windows 7) they are choosing code that has been developed with the mini-laptop format in mind.

Symbian may have started out on the Psion computers such as the Series 5mx, Revo and (ahem) the netbook, but it has evolved and is now designed for a mobile platform, designed to handle the many constraints that a small handset with limited power has to offer, designed for use with a small screen and compact keys... in short porting Symbian OS to a laptop at the moment is probably a bad idea.

Yes Nokia could have gone with a Linux solution, such as Asus and Acer have done with their netbooks, but they would have had to start from scratch, or turn to a distro such as the Ubuntu Netbook Remix. Maemo is unfortunately not compiled for the Intel Atom processor and the work involved for a smallish project would have been prohibitive. So the call was relatively easy – Windows. And given the sales numbers of netbooks where consumers could choose Linux or Windows (the latter outsold the former at over a six to one ratio) it's easy to justify the choice.

The specs are pretty much in line with the next wave of netbooks, and while the 12 hour of battery life from daily use will raise eyebrows, it's not that much of a jump wh en I can already get 7-8 hours with careful use out of my own Asus 901 netbook. But this number is going to be the one people latch on to. I hope the real world value isn't significantly lower. 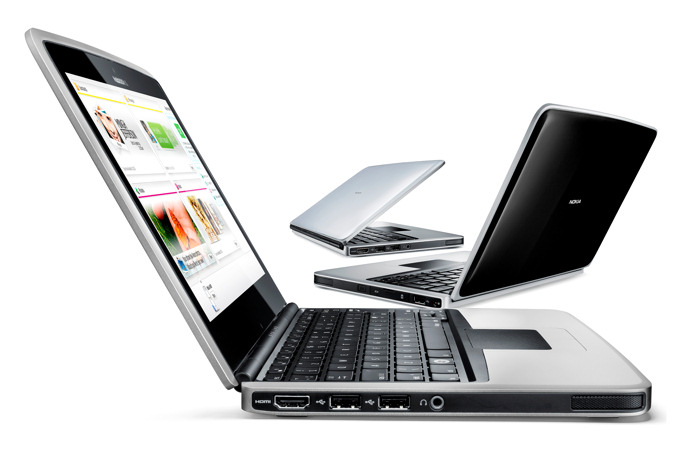 This is a shiny gadget, and there is going to be a lot written about this online, but I don't think it's going to be a massive seller. You could argue that Nokia are late to the netbook party, but I think they have some advantages over the Dells and HP's of this world (although styling is not necessarily one of those plus points).

Having been the owner of a netbook for just over a year now, I've no doubt that carrying around a mini laptop and a smartphone is a winning combination. The question in my mind has always about my data, and where it resides. Ubuntu is not the greatest of partners for an S60 phone, and that's where Nokia's Ovi is going to come into play. For a while now we've been writing that, by staying relatively independent of platforms, Ovi can open a number of new doors in unexpected places. Here's one of them.

With every one of these computers presumably loaded up with a functioning Ovi Suite, the full gamut of tools, from mapping and music, to email and PIM synchronisation, the out the box solution could well be impressive as long as people don't feel these are being forced on them, in the way that companies such as Dell push software in new machines.

I actually think the big winner here will be Ovi Files. It's always been a bit 'meh' to have all your working files available to your smartphone, but now you have a big computer (at home) and a little computer (when travelling) that has bundled 3G access, it makes a lot more sense. Everyone who went huh? at Ovi Files might want to look again at the long game the Finns are playing.

That's on top of the changes that Microsoft have made to Windows 7 to run comfortably on the mini laptops of this world. And you can be sure that there will be a bundle of Linux-heads ready to get Ubuntu Netbook Remix running on this as soon as possible, just because they can. And with specs including HDMI and built in 3G/HSPDA/Wi-fi who can blame them?

In practice, I can see people working happily with a phon e in their pocket, bringing out the Booklet when longer articles need to be worked on. Would you want to struggle with video editing on your phone when you can pop it over to an HD screen and edit with a lot more space and processor power? Exactly, and that's just one use case where having another screen and touch typeable Qwerty keyboard complement a smartphone. 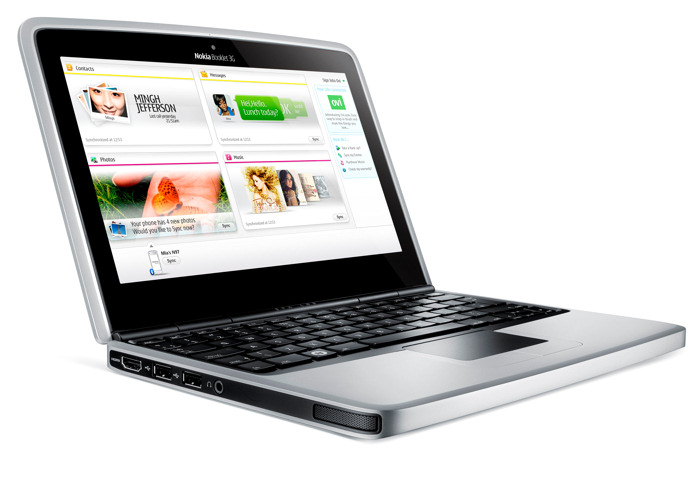 And that's what this has to do with Symbian. By creating an eco-system in Ovi, Nokia have moved the smartphone from an accessory that has to be worked on to keep in sync with your life, to making it a full partner with your data. I really can't see how this is anything but a positive for Symbian going forward. One of the advantages that the iPhone has is the tight integration with iTunes and, to a certain extent, the Mac desktop and iLife suite. I think that Nokia are doing exactly the same thing here with Symbian OS and Windows 7, except they launched their phones before going down the laptop route!

It's not a slam dunk though, as anyone who remembers the aborted Palm Foleo will be thinking. I think that giving it standalone capability with a full operating system is the correct decision. You don't need another phone if you don't want to, everything is in here, including space for your SIM card. It's addressing a small market segment, and those people will lap up tech like this. So the initial thought is that Nokia have made a smart move here, not counting the experience they will gain in this new market that will hopefully benefit them in the medium to long term.

How do we get our hands on one? That's probably due for announcement at Nokia World next week – lets hope it's in the same ballpark as other similar devices – but I think the majority of people who will get these won't be buying the Booklet bare. It will be available from the High Street mobile phone stores with a suitable data-plan. Get the economics right and you might get £30/month for the data and a free Nokia Booklet to go with it... perhaps it'll be available for an extra tenner a month when you buy a Nokia smartphone to pair up with it?

Nokia have actually done something unusual in their corporate strategy today. They're looking to maximise PR before the Nokia World event, they've announced a new device and the snap judgement online is that everyone wants one, and wants one now.