Rafe and Ewan take a look at the Nokia's thumb keyboard-equipped and enterprise focussed Nokia E61i.

The Nokia E61i, announced two weeks ago at 3GSM in Barcelona, is an improved version of the Nokia E61, boasting an improved keyboard and the addition of a camera. It isn't a major update and that is reflected in the naming; Nokia traditionally reserves the ‘i’ branding for devices which have received a small update, often aimed at prolonging the life cycle of a product or adding features left out first time round. That said, the E61i makes quite a number of changes which significantly enhance the appeal of the device both to new and existing users. 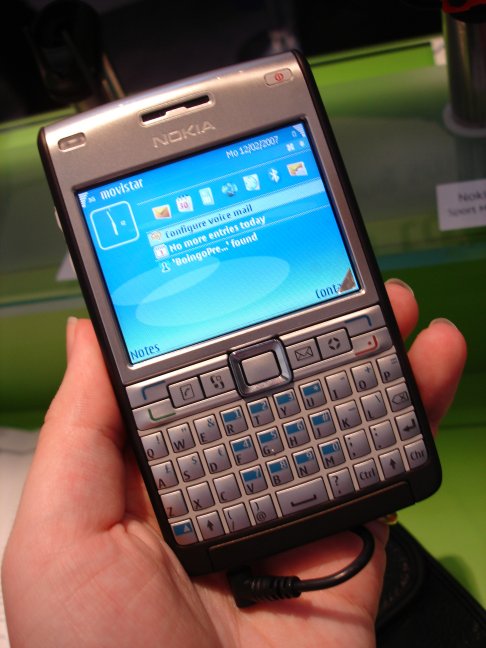 The E61 has been something of poster-child for the Eseries range; it is (probably) the best selling of the range, and has certainly attracted more attention than its fellows. It is then perhaps not surprising that the E61 created something of a buzz both in enterprise and more general mobile circles. It was something of a departure for Nokia, who had previously focussed on their Communicator family for Enterprise usage, and in taking on the traditional form factor of the office darling Blackberry devices, it showcased better than any device in 2006 that S60 devices were not restricted to the basic phone form factor.

Now we have the E61i, the new and improved model, and the pre-release unit that’s on preview here looks the complete business. With some black trim around the outside, and a metal back cover taking up almost three quarters of the device, it looks and feels sleeker and more solid when compared to the original E61. Additionally there are a number of small design touches, such as the engraved model name and Nokia logo, which seem to give a more finished feeling to the overall design. The E61i is thinner than the E61, it is a relatively small difference (cutting out about 10cc in volume), but it does make the device appreciably more pocketable and adds to the overall feeling of sleekness. Nokia says that this has been made possible by some internal restructuring and by changing the materials used in the E61i casing. The build quality on the units we have seen has been outstanding and promises improvement over the E61, which at times could feel a little spongy,

The keyboard, the mainstay of such devices, has also been improved. It still takes up the same amount of space and the same excellent layout has been preserved, but the space between the keys has been increased and the keys are slightly more domed, with the result that mis-keying the wrong button is now something that happens a lot less. The key themselves feel springier and offer excellent tactile feedback, this contrasts with the noticeably 'spongy' keys found on the E61. How much of an improvement is gained will be down to the individual user, but if used daily you should be able to get 10% or so more speed out of the improved keyboard. 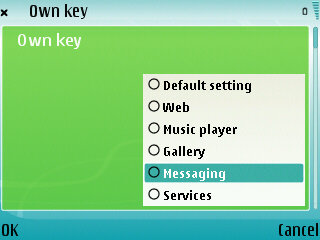 What has changed noticeably on the E61i’s keyboard is the soft key and directional controls strip. Replacing the joystick on the E61, which seemed to engender something of a love/hate relationship amongst E61 users, is a two-piece arrangement, with a central button to depress, and a square ‘ring’ for directional controls around this central button. Thanks to the fact that the thin outer ring is raised higher than any of the other keys, and that the central button that can easily take your finger without hitting any direction key, the controls are more accurate and should be easier going on the thumb and fingers than the E61i joystick. Flanking the directional controls are the four 'one touch' (application) buttons. The S60 and Email keys retain their position on either side of the directional controls, but a further two keys, Contact and My Own, are added on the left and right respectively. One press on the Contacts key takes you to the Contacts application and a second press returns you to your original location, be it within an application or in the application launcher. The My Own key can be customized to launch any application or web bookmark that is available on the device. The left and right function keys and the calling keys do ‘reach around’ these one touch keys, but because their switches are under the bulky part of the switch, they do not get in the way. So for all the stylish looks and curves and lines, the E61i’s keys are well laid out and easy to press accurately. Given the importance of these in a non-touchscreen QWERTY device, it is vital to get this right, and Nokia has met this challenge successfully.

There are a number of other subtle hardware changes. The record key on the side of the E61i is recessed further towards the case than on the E61 and now requires two presses before it will start recording a voice note. This should avoid the familiar issue of accidentally recorded voice notes. The battery has the same capacity as before, 1500 mAh, but has been reshaped to fit into the slimmer profile. The battery should give at least 2 days of life with moderate to heavy use (push email, VoIP, etc.) 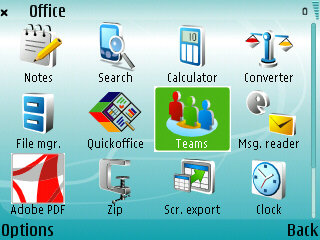 The E61i has the same QVGA (320 x 240) screen in landscape mode as the E61, and the familiar look of S60 3rd Edition. Some existing users may be disappointed that the E61i does not use the latest version of S60 (S60 3rd Edition Feature Pack 1). Nokia says this is due to 'time to market considerations' – in other words in order to get the device out in a reasonable time frame, the original software has been retained. As a result, the software is very similar to the E61, with only a few additional applications, most of which were available as free downloads from the Nokia site or via the onboard Catalogs application. These include the WLAN Wizard (which includes a Active Standby screen plug-in that allows you to scan for and use open Wi-Fi hotspots), a global Search application (search across Contacts, Calendar and Messages, etc. simultaneously), and the Nokia Team Suite application (eases interaction between a group of contacts). We will take a closer look at these applications when final hardware arrives. 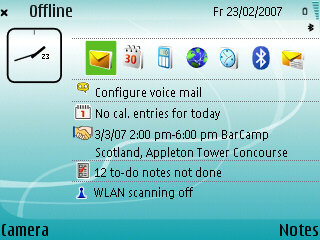 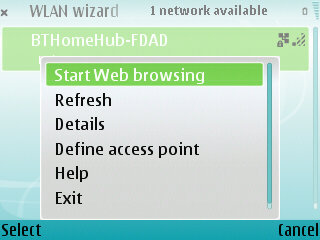 VoIP and SIP users will be pleased to note that the E61i uses the second version of the Nokia SIP stack (available via firmware upgrade for the E61). This includes support for STUN and NAT transversal, which means a much wider ranger of services are supported. The E61i should work with most SIP based services. It is also now possible to set Internet calling (VoIP) as the default calling method when a SIP service is registered making VoIP usage more straight forward and intuitive.

The standard S60 PIM suite is present, there are no functional changes to these apps compared to any other mainstream S60 device, but with the landscape orientation there is less of a feeling of having information crammed onto the screen as you get with smaller screened devices. On the other hand, it does mean that there can be a feeling of wasted space, and it is a shame more information cannot be presented to the user. Looking at how the E90's PIM suite is being tweaked, and given the target market of the E61i, it would be beneficial to see some of that philosophy leak into the E61i. That said, the benefit of running S60 is that there are third party applications, such as Aqua Calendar and Papyrus, which offer this kind of functionality. 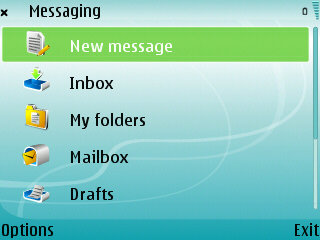 The familiar Messaging application is present, as is the service-agnostic push email support. Supported email services include Nokia Intellisync, Blackberry Connect, Microsoft Exchange Active Sync, Visto and Groupwise. This broad support is one of the key selling points of the Eseries compared to its competitors, especially amongst Enterprise users who have mobile messaging and VoIP services and products already deployed. 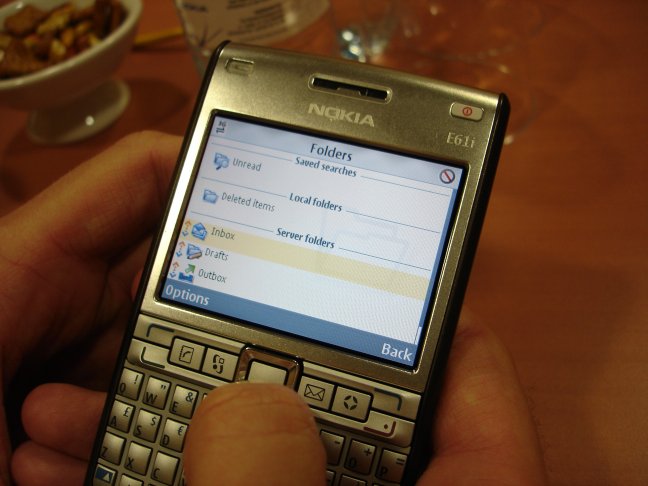 The biggest addition to the E61i is found on the back of the device – a 2 megapixel camera. Unsurprisingly, Nokia says the addition of a camera has been one of the commonest requests from E61 users. As an Enterprise-focussed device it was not surprising that the E61 lacked a camera when launched, as that was the prevailing trend. However, common sense seems to have prevailed and concerns over camera phone security amongst businesses is less prevalent than a year ago. Moreover, there is an increasing realization among device manufacturers that these are 24/7 devices, and that users want a device for both work and play. Other manufacturers are following this trend, the Blackberry Pearl is a prime example of this. This suggests that the surprise is not the inclusion of a camera, but rather that there is no camera-less version, as there was with the Nokia E50.

The camera performance (sample image here) is middle of the road for Nokia-made Symbian OS devices, which means that when compared against any competitors in its segment from Blackberry or HTC, the E61i camera is good.  It is not a patch on the N93 or N95, or even its future brother the E90; and it has only a regular Nokia lens, not Carl Zeiss. The specifications suggest it should deliver similar performance to the Nokia N70, although it does lack an LED flash and has a more basic Camera application. Image capture is at 1600x1200 pixels, while video is at 15fps and a resolution of 352x288 (QCIF). Thus there should be ‘good enough’ performance for leisure moments and for taking short personal videos, but not for the professional, which is natural given the focus here is still on Enterprise users. 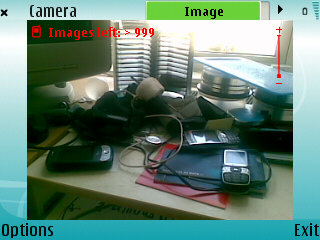 Performance on the E61i is remarkably similar to the E61, with over 23MB of free RAM to play with when switched on. This, more than anything, shows the E61i really is deserving of the ‘i’ but nothing else. It is a clear successor to the E61, with build quality significantly improved, and perhaps half an eye on the regular consumer market thanks to the addition of the camera. Existing users are not likely to be enticed into upgrade unless they really feel the need for the camera, but a new set of users should be attracted to the Eseries family.

The thumb keyboard/email smartphone space remains fiercely competitive, with offerings from Palm (Treo), Blackberry (Pearl), Motorola (Q), HTC (Excalibur/S320), Sony Ericsson (M600), Samsung (i320), iMate (JAQ) and others all aiming at the same market segment. With the E61i, Nokia have a competitive offering, it packs in the right connectivity options and the software offering remains strong, but it doesn't stand out from the crowd.

The E61i will solidify Nokia’s existing position in the market, though. Even with the rest of the Eseries portfolio in mind, Nokia might be well advised to offer two further members of the Eseries thumb keyboard family if they wish to gain broader market appeal. Firstly, a premium version that uses some of the technology from the E90, such as the HSDPA connectivity, auto-focus camera optics and GPS chipset and secondly a more basic, cheaper model, perhaps losing the camera and 3G connectivity.