Making more of less: Pimping the Nokia E61i and smartphoning on the cheap?

In an epic tale of heroism and 'making do', I lead you through a series of hopefully thought-provoking segments, showing that perhaps there's more to a smartphone than feeling compelled to buy the latest £400 hardware. In the process, I point out the potential benefits of one of Nokia's unsung heroes, the E61i, my main smartphone through the summer of 2007 and a device to which I was recently reintroduced. Reality bites home in the end, though, and I conclude that there's an equal acknowledgement to be made in terms of progress made by Nokia and Symbian over the last few years.

After my lengthy two-part (look 'em up) piece looking at the functionality (for me) of the Google Nexus One compared to the Nokia N97, I was struck by how many commenters still misunderstood my intentions. I was explicitly looking at real world functionality, not raw specifications. So, for example, I would talk about music playback or secure databasing or video watching and I would get back comments like "But, dude, the Nexus one blows the N97 away, it's got a 1 GHz processor and capacitive screen!". Totally missing the point. Great specs are important, but they're not the end of the matter when it comes to your smartphone helping you get through your daily life.

The point was also reinforced later in the week when I was reintroduced to an old friend - the Nokia E61i. You'll remember that this has something of a unique form factor in that it was quite a bit wider than the current generation of qwerty candy-bars, enabling a 2.8" display and enough room for a keyboard with distinct spaces between the keys. The E61i (and E61 before it) were also indestructible.

I had one for ages back in 2007 but had to give it back to Nokia eventually - and sadly. But fancying at least trying out the form factor again, and having made some enquiries around my Twitter following, I was happy to be on the receiving end of a gift of Jonathan Quirk's old E61i. Impressively bearing up the 'indestructible' claim, this E61i had been dropped from a variety of heights, submerged in water at least twice and generally used, scratched and battered to within an inch of its life. There's even a suspicious dent on the back which was either Jon using the E61i to hammer in a nail or else it saved his life when he was shot at by the Mafia. 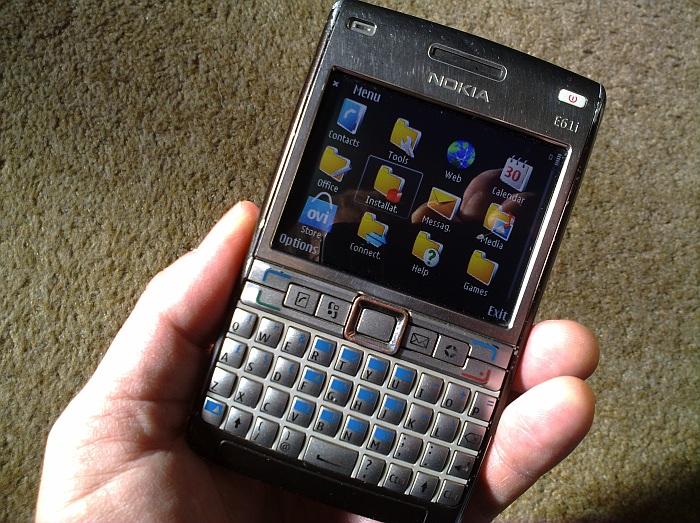 Bruised and battered, but still fully working, the indestructible E61i

And yet this plucky E61i insists on working fully, as well as the day it was bought, back in early 2007, three years ago. The metal chassis has a lot do do with this, of course, but the general build quality and simplicity of form factor also help, with no moving, sliding parts. Can you imagine an N97 after 3 years of intensive use? I'm guessing it wouldn't have fared so well.

In fact, its fully-working status got me thinking. Having just been working out whether a Nexus One could replace my own trusty N97, how well could the E61i cope? The form factor's superb, maybe even better. And on the one hand, the internal electronics are more primitive, but then much of today's smartphone functionality is provided by software not hardware, and surely this could be retrofitted to the E61i by me, the informed and obsessive geek? I love a challenge...

In the process of trying, I learned two things, albeit slightly contradictory:

So, having determined to take the old (and in this case much battered) E61i as my example, let's take a closer look at it. The uniqueness of its form factor stems from the width - at well over a centimetre wider than the newer E71, E63 and E72, there's room for a far larger 2.8" display, equalling that on the N95 8GB and N96, but in the generally more business-like landscape aspect. The keyboard has got more room too, with chunky keys that have room all around - the keys have a good millimetre of travel and are quite firm, making it a bit of a shock after the soft-touch minimalist key feel of the N97 - but that shouldn't count against it. Finally, there's the metal chassis and full stainless steel back - paraphrasing the allusion above, if you were to be shot and the E61i was in your breast pocket, I think you might just come out alive. 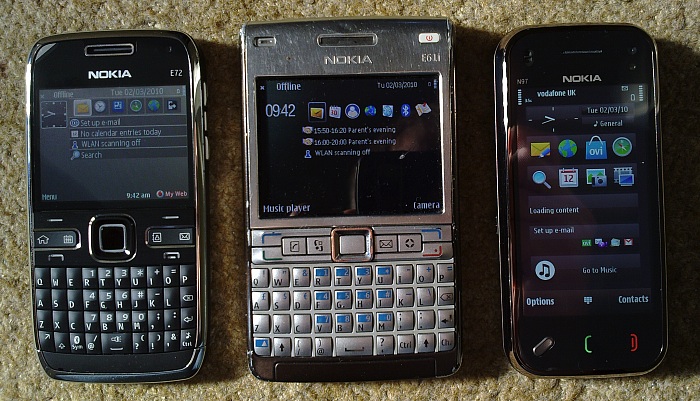 On the downside, the device hails from a pre-N95 era, so there's no built-in GPS and the camera's a serviceable but ultimately limited 2 megapixels, with no flash. More worryingly, the E61i runs vanilla S60 3rd Edition, this was one of the last to do so before Feature Pack 1 was introduced, so there are a number of software and codec limitations, which I'll come to below. And there's the slightly clunky way that a 'Services' WAP browser gets launched some of the time - the later Feature Pack 1 was where Web integrated all online access, you'll remember. Finally, in common with the devices of the era, there's relatively low free RAM - in comparison to modern smartphones. So there's only around 23MB free after booting. This is enough for the basics, but (for example) trying to run something really hungry from 2010 (e.g. Skyfire) just hits the buffers quickly and you're in trouble.

But all is not lost, this is still a very capable smartphone and one which, given help from me below, can get up to around 75% of the functionality of the flagship N97. And most of what follows is equally applicable to any other S60 device of the same vintage. The camera-less E61, for example. And, to some degree, the N80, N93, and so on.

Bringing the E61i kicking and screaming into 2010

Having trailed the idea for this piece, I've received several emails asking for a blow by blow account of exactly what I installed. So, in approximate chronological order, here's how the 'pimping' of the older smartphone went(!)

Back to the Future: in summary

As indicated earlier, the two things I learned from all this rather contradict each other. Yes, I was able to get most of my smartphone basics working on the older hardware with a little (ok, in some cases, a lot) of Tender Loving Care. And, for those basics, the E61i is a useable device. So, in this sense, my 'making do' experiment has been a success and proved you don't need something that costs £400+.

But the world has moved on. Every year, more and more functions get 'converged' into our phones - who'd have thought when the E61i was launched that the 2010 smartphone would be everyone's de facto sat-nav, music player and part-time TV? In addition, web sites and web services have grown in terms of their complexity and RAM requirements. For example, the Skyfire browser, popular in other parts of the modern Symbian world, just wouldn't start most of the time on the E61i - there was rarely enough free RAM. What was sufficient in 2006 and 2007 for PIM data, office editing and a little light web surfing, is looking pretty meagre in 2010.

Of course, you could also argue that modern devices likes the N97 are also affected by low RAM - but not quite to the same degree - the v21 N97 boots with almost 60MB free if you set it up intelligently, well over twice the free RAM of the E61i. Even leaving aside this aspect, the progress from 2007 to 2010 is very noticeable. On both the specifications and software front. On my N97: 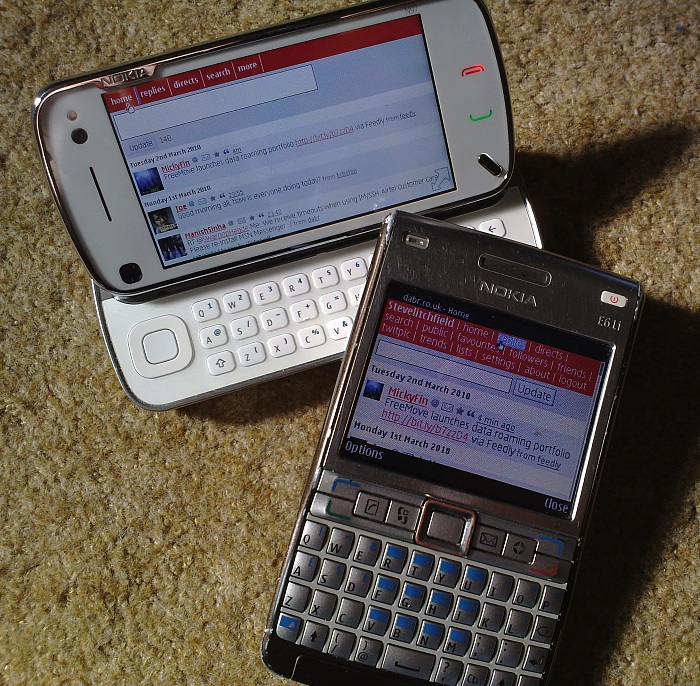 It's a bit galling that, three years after the E61i and around eight since the first S60 smartphone (the 7650) appeared, we still don't have any device in the world that's remotely close to being 'perfect', but then the world around us is forcing change at every turn, expectations are always changing and new aspects of convergence are being toyed with. And, as Tim Salmon and I keep saying on The Phones Show Chat, if a perfect device ever did arrive then, as pundits, we'd all be out of a job.

Steve Litchfield, All About Symbian, 2 March 2010

Filed: Home > Features > Making more of less: Pimping the Nokia E61i and smartphoning on the cheap?