Getting the most from SmartMovie

Get to grips with the world of Digital video once and for all and create movie files which are quite watchable on the Communicator's screen.

It's a fair bet that at some point you've tried playing back video clips in RealPlayer on your Nokia 9300 or 9500. These have probably been clips recorded using the built-in camera and will have been of very low (3GPP spec, i.e. 176 by 144 pixels) resolution. But your Communicator is capable of much better. I've mentioned Nokia's free Multimedia Converter before on AAS, but this tool is designed for 3GPP videos, for creating MMS content. At its maximum video bitrate of 128kbps (kilobits per second), the picture is reasonable but the audio is absolutely awful for anything other than speech. By 'breaking' the 3GPP spec and opting for the optional 'AAC' audio encoding, the sound can be fixed, but you're still left with a picture that only occupies just over a quarter of the width of your screen.

Which is where SmartMovie comes in (www.lonelycatgames.com) (see my review). By using a better encoding scheme (XviD – a free version of DivX) and a custom player application on the Communicator, it's possible to create videos with picture sizes right up to the full 640 pixel width of the 9500 and 9300. The problem then becomes the limited processing power of the Communicator, with it being unable to handle full frame rates at this picture size, so things get very jerky.

Since writing this tutorial text, there's another alternative. See DVDPlayer, and also our review.

Luckily, I've worked out the best settings to use for a satisfying video experience. If you follow my guide then you should be seeing fairly smooth video at a picture size of 320 by 200 pixels, with great sound too.

SmartMovie's converter is a terrific example of easy-to-use software, but there are one or two things to note before you hit that 'Convert' button. Open up your source video straight away if it's in AVI format, otherwise head over to www.free-codecs.com and grab whichever codec 'pack' you need. 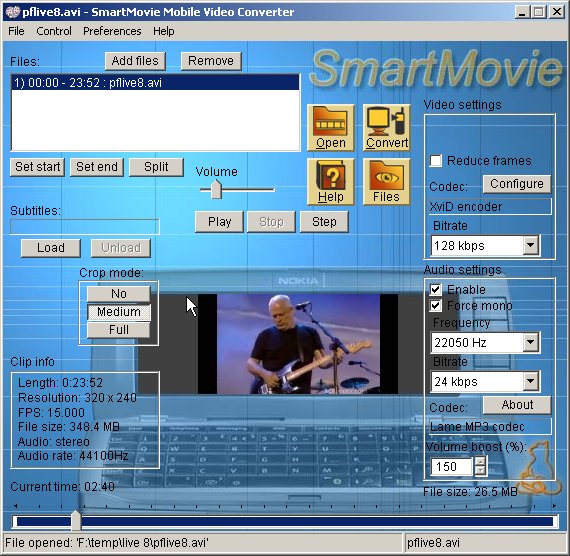 You should be able to click on 'Play' and preview your video within the 'skin' of a Series 80 device. If the wrong device skin is shown, you can change it in 'Preferences'. Go for 'Series 80 – 400x200'. You're immediately saying goodbye to 120 pixels on either side of the screen, but the frame rates will be far, far better. 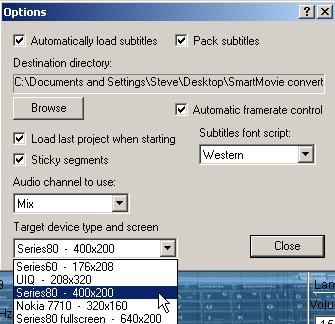 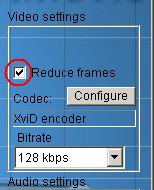 You can leave all the default Video/Audio settings, as they produce good results without inflating the final file size much beyond that produced by Nokia's free tool (around 1MB per minute). But do check 'Reduce frames', as there's no way your Communicator could handle a full 25 frames per second anyway.

Now to 'Crop mode'. Because most source video will be in 4:3 or 16:9 aspect ratio, it's best to lose a slice off the top and bottom of your picture in order to end up with something better suited to the Communicator's display. We recommend 'Medium' for fast moving videos and 'Full' for stuff that's slower moving. 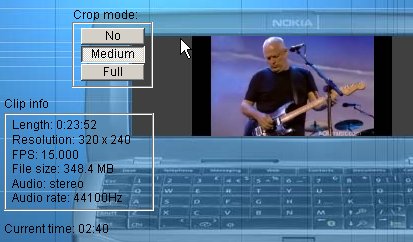 On the 9300/9500 itself, you'll have to get used to SmartMovie's ultra-weird interface. This will probably be your first sight after starting the program. Press the top command button, then choose 'Browse files', then 'Menu' and then 'Rescan File System'. Phew! Your new file should finally be shown in the list.

Finally, press 'Play' and enjoy. Once started, control is far more intuitive. Up and down control the volume, and left and right let you skip through the file to find the section you want. Hopefully you'll agree that the frame size, quality and smoothness are a step up from standard 3GPP videos in RealPlayer.

Filed: Home > Features > Getting the most from SmartMovie

Platforms: Series 80
Categories: How To