How to: 10 steps to double battery life in your Nokia 808

Never let it be said that I let good article ideas wither on the vine. Drawing on a piece I did for the N8 and E7 a year or so ago (running Symbian Anna at the time), here's my top 10 battery saving measures that can be employed by anyone with a Nokia 808 PureView (or indeed a 701 or even a Belle-Refreshed N8/E7!) In extreme cases (or using my 'No. 10' tip), you can easily double battery life, easily getting two full days, perhaps even three days, of use on a single charge.

Now, the Nokia 808 PureView (and 701) happily let you swap in a new battery, so life isn't as critical as it might be on a device with a sealed battery (e.g. many modern Android/iOS/Windows Phones). But it's a hassle finding a genuine spare battery, it's a hassle keeping it charged and it's a hassle having to shut the phone down to do the swap. And, yes, you could bring along a portable charger of some kind. But it's surely better to manage battery life in the first place, with 10 simple measures that may not impact your smartphone lifestyle too much but will dramatically extend the time before your device yearns for a charge.

(In compiling the list below, I used Nokia Battery Monitor 2 and Nokia Energy Profiler, both of which are free - so you can try them yourself if you like.)

Aside from display abuse, this is one of the single biggest power hogs in a poorly set up Symbian phone. This setting may well be 'on' in your phone already, in which case there's no need to panic. But make absolutely sure (in Settings|Connectivity|Wi-fi', tap on 'Options|Settings’) that Wi-fi ‘Power saving’ is ‘Enabled’. Essentially, the wi-fi radio gets powered right down to an idle mode immediately after each packet of data – and you avoid a constant drain of around 100mA. To put that into perspective, Wi-fi running without power saving could, on its own, drain a full charged, unused 808 in well under 12 hours. If you've been experiencing terrible battery life, this is a good place to look for a culprit. 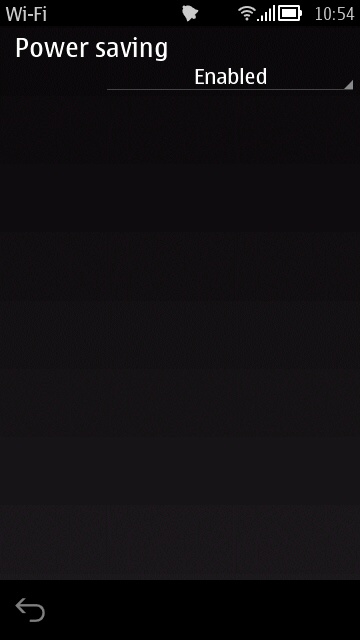 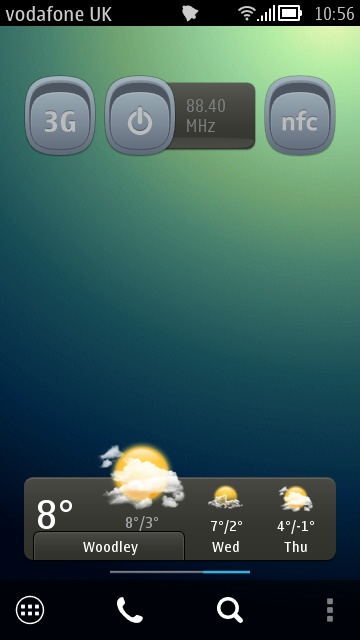 This is somewhat controversial, partly because its effects are never the same for two different people, living in different areas with different patterns of movement. Having said that, following my tests, an idle (but active) GSM (i.e. '2G', GPRS or EDGE) data connection drains about 10mA, while an idle 3G or 3.5G data connection drains about 40mA - a big difference if you're going to leave cellular data active all day (for example, for push email or social networking updates). And those are under optimum conditions. Stray further away from a 3G cell tower and the phone will work harder to keep the connection going. And will work harder to even stay 'registered' with the 3G tower in the first place. Harder work = greater current drain. Under extreme conditions, at the limit of 3G coverage, with data active and transfer taking place your phone can be pulling up to another 150mA from its battery. Fifteen times the current drain for GSM data. And you wonder where your battery's capacity is going...

The simple solution is to be aware of coverage where you are (or are travelling through) and, if there's poor 3G coverage (and if you can live without its theoretically higher data speeds) then use the supplied Nokia Belle widget shown here to toggle 3G on and off with a single tap. Certainly on car and train journeys I've found keeping my 808's 3G turned off to be tremendously helpful at saving battery power. And, after all, for Twitter, basic email and Facebook, such connections are quite enough while on the move.

PS. Note also a wealth of other connectivity toggles, both in the Belle drop-down notifications pane and in the homescreen widget selection (two more of which are shown above).

Rather reversing the old cowboy film stereotypes, colour schemes on AMOLED-screened phones are critical. Both for the OS 'theme' applied and the background colour within applications. Of course, in some cases there's little you can do - for example, browsing a web site with a white background - but it's still something to be foremost in your mind when choosing what to do on your smartphone and how to do it.

I did an extended link of interest to the initial research into the way OLED screen power drain varies hugely with the brightness asked of it. In summary, a display that's basically black but just lighting up text and screen elements uses up to fifteen times less power than the exact same display but with a white background and (say) black or blue text and elements. In my tests, using a white theme for a static display (e.g. in Calendar) used a massive 200mA more than the exact same screen with one of Nokia's built-in 'Evolve' (black) themes applied.

So think about the applications used. For example, I use Gravity's 'Dark' theme for all my Twitter and Facebook monitoring rather than Nokia's white-everywhere 'Social' utility.

In summary, whenever your gorgeous OLED display is chucking out brightly lit pixels in quantity, it's also sucking the life out of your battery. For the old LCD/TFT screens, as on the Nokia 701, for example, the power difference between black and white was only a factor of two - since the backlight had to be on anyway. But a factor of fifteen is too big a factor to ignore... 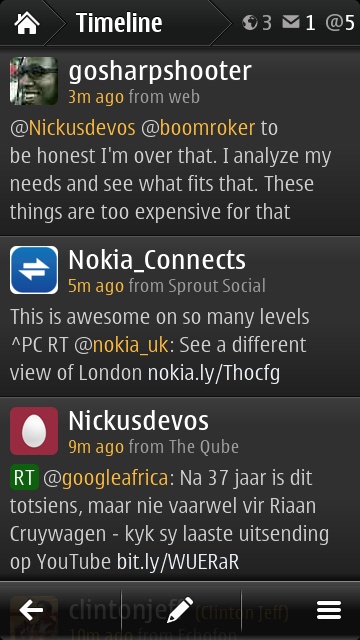 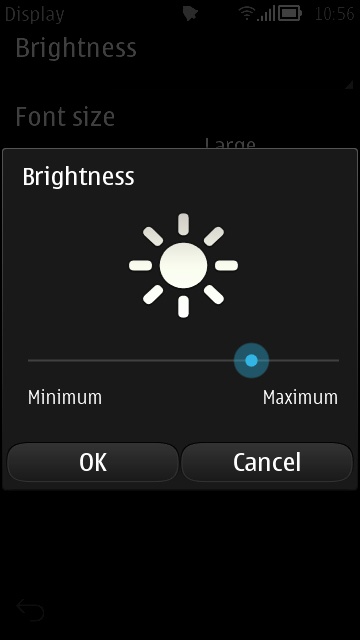 4. Can you live with lower screen brightness?

The answer may well be 'no' - after all, we've all become so used to large, bright colourful displays in 2011. And you may do a lot of video and photo viewing, both of which really require full brightness! But remember what I said about white-backed screens, e.g. in Web? They use an order of magnitude more power, on full display brightness, at least. If you think you can live with brightness set a notch or two down (you'd be surprised how quickly you get used to it), pop into 'Settings|Phone|Display' and tap on the ‘Light sensor’ line, then adjust to suit.

The dimmest setting uses around 30mA with a white (Web) backdrop, the brightest setting uses around 180mA for the same screen contents - quite a difference. In other words, you save/use up to 40mA of battery current (under a Web browsing use case) per 'notch' on the 'Brightness' slider. Of course, if most of your smartphone usage is with a dark theme and applications which respect this then the brightness setting will have little effect. It all depends on what you do with your Symbian smartphone.

On the Nokia 808, I find that the very brightest setting produces some unwanted colouration of what should be white text, and so I've been very used to keeping the device on 75% and have been happy. And I suspect I could get used to 50% (the default) if I felt it worthwhile.

One of the biggest power drain use cases on a smartphone is when you're using your phone to be your voice-guided satellite navigation system. We're talking worst case everything: the display will likely be on all the time, the GPS receiver is working overtime tracking satellites in the sky, a data session will usually be active (grabbing new maps, POIs, route alterations, traffic status, etc.), you may have Bluetooth enabled to a headset or car stereo system, and the processor's working hard to keep track of where you are on the map. Add that lot up and you're looking at around 500mA, i.e. half an amp! At which current drain you've got just over two hours of direct use only, even from a fully charged battery.

Which is obviously unsustainable. Invest in a 12V-to-microUSB power adapter and use it. You're unlikely to get that much charge into your Nokia 808 if you're hammering it that much with sat-nav functions, but at least it'll be in a steady state and you can use it as long as you like without the battery state dropping like a stone!

If no 12V connection or adapter is available, a useful tip is to switch back to the homescreen once you're underway, i.e. let the display dim and switch off as normal - but the GPS lock and the Nokia Maps voice instructions will carry on in the background - you'll save massively on display power though. You may want to just switch back into Nokia Drive when you're approaching a tricky junction and want to be sure which lanes/exits to take.

So get used to closing Camera with the 'Hang up' key!

Many widgets on your Symbian homescreens are applications in their own right - able to kick off a data connection and access the Internet. You'll see lower data use, a faster device and (importantly) better battery life if you 'remove' homescreen widgets which you really don't need. Is that 'E!' one so vital? Do you need to see the latest 'Movie teasers'? Thought not. Just zap 'em and move on. Keep your homescreen(s) lean and mean and you'll see better performance and better battery life.

8. Be kind to your battery

As with any other electronic devices powered by Li-Ion or Li-Poly rechargeable batteries, don't 'stress' your phone too much. Avoid leaving it in the full sun or outside in the snow(!) and never, ever leave it stored for any length of time with a drained battery. Doing so can kill the battery for good.

When charging, you don't need to wait until the battery is empty before charging. In fact, the more often you 'top up' the better and the longer your battery will last in terms of longevity. And ideally, if you want to cram in as much charge as possible, make absolutely sure the battery is full and has completed its trickle charging by waiting for the animation to stop moving before you disconnect the charger. The time to fill the battery will vary according to your charger's rating.

Although multitasking in Symbian works pretty well - it's efficient and 20 'running' apps in the background shouldn't necessarily drain any more current than a single app - there are exceptions. Apps which periodically run up the processor or check for data, games which run in tight loops, utilities which try to run all the time to perform some helpful function. All of which are fine if you want them - but best terminated if you don't. Press and hold the home button at any point to scroll through the apps you've currently got running. Tap on the 'x' icon to terminate any which you won't need for a while.

OK, this is a bit of a cheat, but note that there are bona fide extended batteries which offer extra capacity. I've tested the monstrous 3000mAh Mugen replacement for the 808 (complete with new back!) but there's also a 1500mAh version with the same form factor as the 808's original cell, offering up to another 20% charge and with your original BV-4D battery as your new 'spare in your pocket'. A review 1500mAh cell is expected shortly here at All About Symbian. 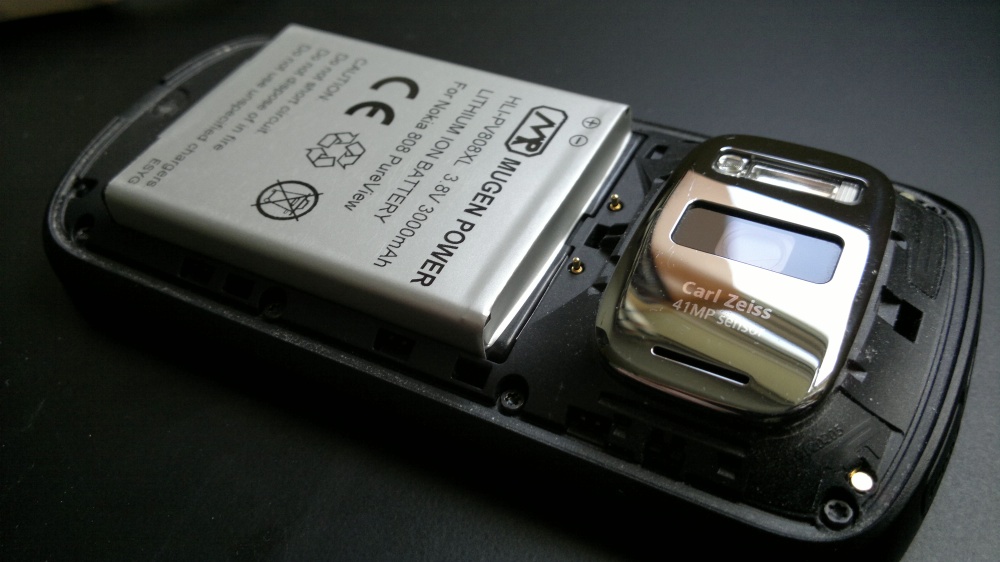