PureView, as we explained last week, on the Nokia 808, is a combination of various bits of technology. Not least the huge sensor, the 41 megapixels, the oversampling to reduce digital noise and improved audio capture. But one of the sexiest parts of PureView - being able to use digital zoom to see more detail of your far away subject without unwanted artefacts, turns out to be something you can play with (albeit in limited, more primitive and somewhat pointless form) right now on your Nokia N8. Moreover, it turns out that, surprisingly, digital zoom really isn't evil all the time - it's something you can benefit from immediately, even at full 12 megapixel resolution on your phone.

The idea behind zooming in PureView, in summary, is that with a huge sensor array of pixels, you can use a lower, standard resolution (e.g. 5 megapixels) and then zoom in up to 3x using the 808's 'slide-zoom' gesture. Zoomed out, each 5mp pixel is actually a derived/virtual pixel using data from the underlying half dozen or so physical pixels. (Calculations are very sophisticated, it seems, and done using a custom Nokia GPU that sits alongside the camera unit.)

As you zoom in, less and less of the sensor area is being used, but the high starting resolution means that, even at 3x zoom (as high as optical zoom ever got on smartphones (e.g. the Nokia N93 and Samsung G810), you're still getting a 1:1 mapping between the pixels in your captured 5mp image and those of the physical sensor. So there's no need for the imaging chip or software to start making up information - which is where digital zoom has traditionally suffered on many cameras in the past - go any significant way past the 1:1 level in terms of sensor pixel use and you're not gaining anything - other than artefacts.

It's a cool idea - using megapixels to work around the lack of an optical zoom, but did you know that Nokia has been using this idea, admittedly in less sophisticated form, for years and just not telling anyone? You'll find that what's described here works on everything from the Nokia N82 (2008) upwards, albeit with big resolution caveats.

First of all, here's the proof. The Nokia 808 PureView defaults to 5 megapixel images from its 41 megapixel sensor, which gives it 'lossless' zoom up to 3x - terrific stuff, and backed up by that huge 1/1.2" sensor. But scale it all down quite a bit and you get to another workable system on the Nokia N8. The sensor's smaller, at 1/1.85", but set the picture-taking resolution at 3 megapixels and the 12 megapixel resolution is still high enough to enable 2x zoom without any loss of detail or artefacts creeping in. N8 owners will have noted that digital zoom is hard-coded to max out at 2x, so it's easy to just use the N8's buttons to zoom in as far as you can.

Here's a 3 megapixel image taken with the N8 at the weekend in rare winter sunshine (scaled down to fit the web page here, but the original is at 2000 x 1500 pixels): 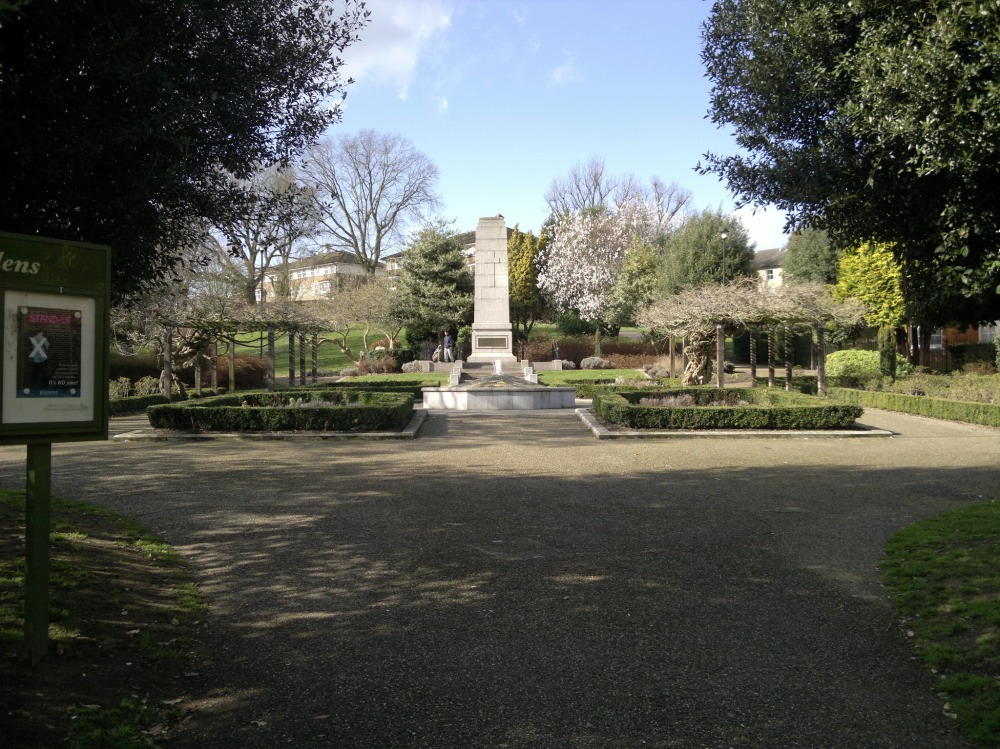 Now I used the 2x zoom provided by the N8's camera and took the shot again. Next, I was able to compare the detail being captured at the centre of the scene by using a photo editor on my desktop to crop into near 1:1 pixel level and look at the same monument detail. On the left, the cropped unzoomed image, on the right, the cropped 2x zoomed image:

Quite a dramatic difference, look at the curves at the bottom of the main pillar in particular. What's happening here is that the N8's camera hardware and software knows that the requested 3 megapixels isn't using the full resolution of the 12mp sensor - so when you zoom in, the camera software seizes on the opportunity to use the extra detail that's available behind the scenes.

Yes, what's happening here is very analagous to what Nokia has described in PureView, though there are of course some big real world differences, of which more in a moment. But let me first explain the behaviour above with a simplified diagram, just to be clear.

Imagine, for the sake of argument, we have a square sensor with 64 pixels. Its default resolution is '64', you can see these pixels as the smallest squares below. Now switch the imaginary camera to 16 pixel resolution (equivalent to switching the N8 from 12mp to 3mp) and you can see that we now have just 16 pixels spanning the sensor*.

* In PureView terms these would be 'super pixels' or 'virtual pixels', with values derived in a very clever way from the values of the 4 pixels beneath - though it's important to note that with current phone cameras (including the N8), there's no significant derivation or averaging going on, let alone any noise reduction - the extra pixels can be assumed to simply get binned.

We now want to zoom in using the imaginary camera's zoom buttons, to 2x. When zoomed, the actual sensor area being used is only the central 2x2 virtual pixels (the red circles in the diagram): 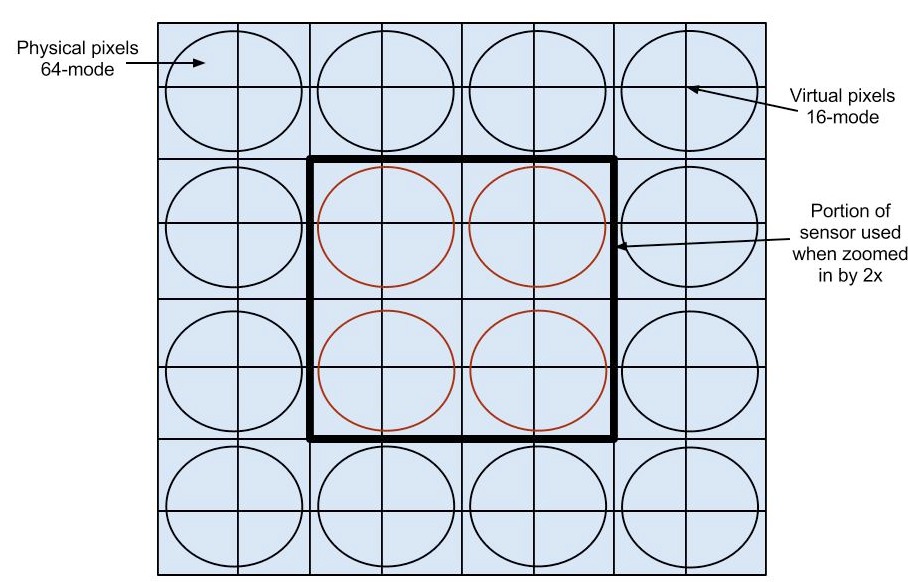 Traditionally, we've all been told "Don't use digital zoom - it's evil", referring to the way early/cheap digital cameras (and camera phones) take the 2x2 'image' (in the simplified example above) and either spit it out as-is or, worse, blow it up to 4x4, making up extra artefacts to fill in the gaps. They do this because there's nothing of higher resolution to fall back to.

In this case we know that we're using a higher resolution sensor (64) in a lower resolution (16) mode. And so what can happen here is that the camera phone software can use the 4x4 grid of physical pixels inside the zoomed in sensor area, giving us back the full '16' resolution without losing information or (just as bad) having to make anything up.

This is what's happening when we run the Nokia N8's 12 megapixel camera in 3mp mode and then zoom in by 2x (as per the photo example above) - the central 2000x1500 section of the 4000x3000 pixel sensor is being used to give a perfectly ('losslessly') zoomed image.

To prove the monument example wasn't a fluke, here's another 3 megapixel scene, captured on my N8: 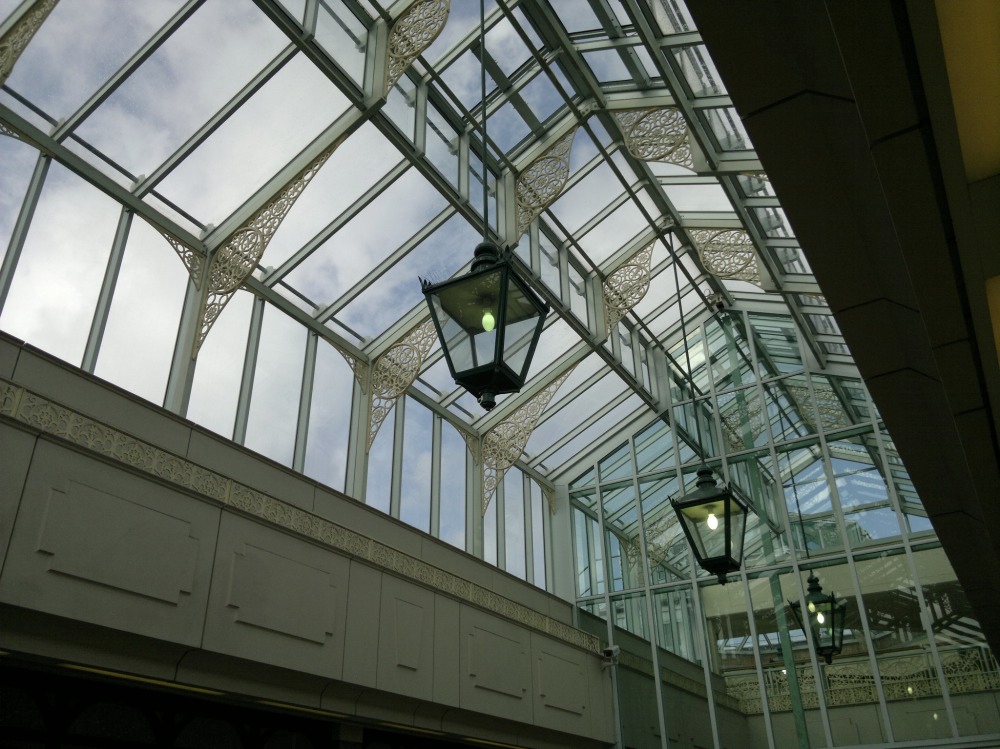 Again, having taken this 3mp image, I zoomed in to the maximum 2x using the N8's zoom buttons. On the left, below, is a crop of the original image's detail; on the right is the immeasurably superior zoomed version: 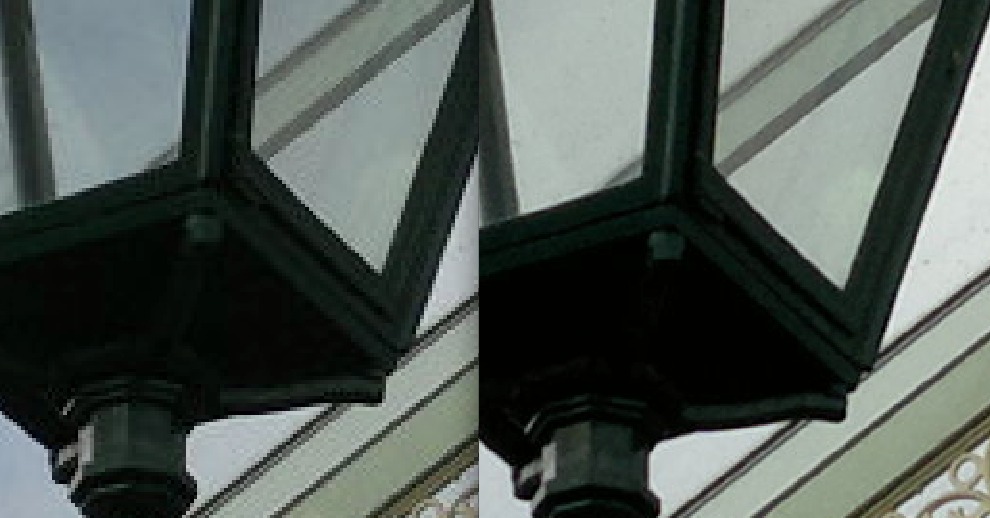 OK, so I've made my point. Using similar (though nowhere near as refined) techniques as Nokia's PureView - by using a higher resolution Nokia phone camera in a lower resolution mode, you can demonstrate the basic theory behind PureView's zooming for yourself. In fact, you can do the same with almost any Nokia camera phone, e.g. an N82 or N86, with the somewhat increasingly burdensome caveat of having to select a lower and lower capture resolution in order to see the technique at work (because their original sensors are lower resolution, at 5mp and 8mp respectively).

But what about practical use? The possible problem is that you'd have to leave your N8 in '3 megapixel' mode (since you're not going to want to keep switching resolutions in Settings) and accept that most photos will be significantly less detailed than the phone can produce at full resolution ("I wish I'd taken that one at 12mp", you might think later). Probably not worth it for long term use.

It's important to note that the 808 PureView gets away with defaulting to 5 megapixels (with 8mp as an option) because there's plenty of oversampling and other image processing going on from the underlying 41 megapixel array - producing 5 (or 8) million 'perfect' pixels. So with the 808 we're not talking about a lower resolution (than 12mp) for the sake of it, it's an acknowledgement that 5mp is the sweet spot for many people's typical use, in terms of printing off at up to A4, in terms of uploading to various sharing sites. And produced with the knowledge that, even in low light, the 5mp image will make the most of every single 'super pixel' in the image.

Before concluding, there's one more question that might pop into your mind. What happens if you leave your N8 in 12 megapixel mode and then use the 2x digital zoom? That really is forbidden, surely? After all, unlike on the 808 PureView, we'll have 'run out' of pixels?

It turns out that, although we have indeed run out of pixels and although the N8's camera electronics is having to interpolate between available pixels, Nokia's engineers have done a cracking job on the algorithms - I shot a church tower at around 60 metres, once at default framing at 12mp and then again zoomed in to the N8's maximum of 2x. Here are central crops of the two images, side by side: 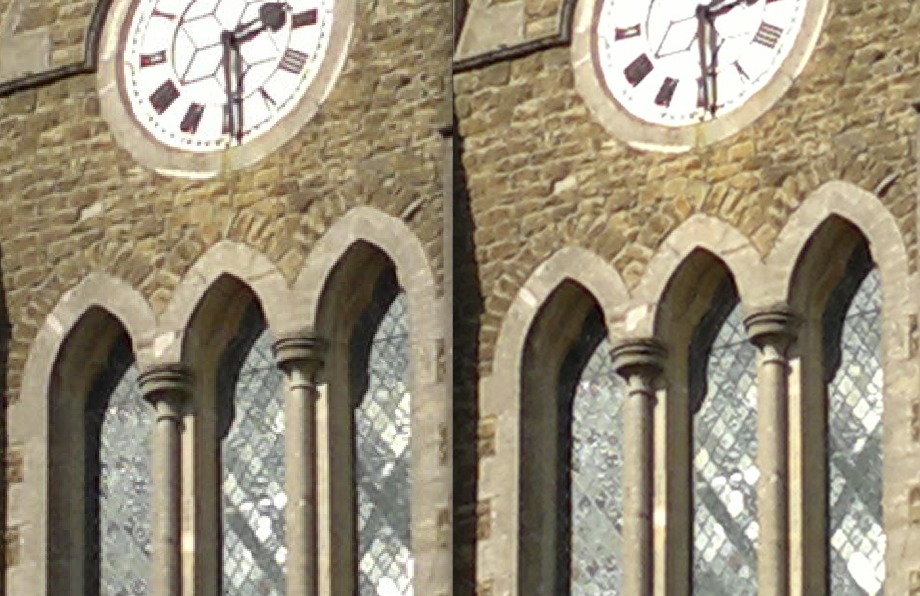 Hard to tell them apart, isn't it? In fact, I had to look up the filenames to remember which was which. Turns out the right hand one is the zoomed version, by the way.

Other than a better practical appreciation of how PureView zoom is going to work by trying the above experiment in 3mp mode on your own phone, the big takeaway from this piece is, I think, that digital zoom is not always evil.

In the hands of the 808 PureView, digital zoom is handled consummately - indeed, that's how the technology works. But it's also not a no-no on the N8.

In each case, you can safely use the N8's provided digital zoom, even in full 12mp resolution, without feeling guilty. You won't lose noticeable quality and you'll retain full 12 megapixel resolution. Which has to be good news all round.

Comments welcome on how you've got on with digital zoom on other Symbian smartphones! And if you think all of this is quite cool, you ain't seen nothing yet - roll on May and the 808 PureView. I can't wait!

Steve Litchfield, All About Symbian, 6 March 2012