How to: Six tips for getting started with Nokia Internet Radio

If you have a touchscreen Symbian phone then there's a good chance that you've never even tried Nokia Internet Radio, since it was omitted from device firmwares for S60 5th Edition onwards. However, first for these phones and then for Symbian^3, it has appeared in the Ovi Store and is a highly recommended (and completely free) install. But the sheer number of genres and stations (tens of thousand) is overwhelming. I reckon you might need a little help finding your way round.

1. Get the right version

Firstly, though, head into the Ovi Store to get the latest version of Nokia Internet Radio for your phone. The Symbian^3 one is different to the older S60 5th Edition one, in terms of under the hood optimisations, so the Ovi Store is a good way to make sure you get served up the right one.

Internet radio, as the name suggests, gives you real time access to radio streams (distributed via 'Shoutcast' URLs) across the Internet. Unlike listening to MP3s, this really is like radio in that it can't be paused or rewound if you miss something* - this can be annoying sometimes but it also makes it a good daytime companion that really is there all the time, most Internet radio stations operate 24/7 and they never 'run out' of content.

* some Internet radio applications, especially on other platforms, do buffer enough of each stream that you can pause for short periods or even rewind a minute or so. It would be nice to see this buffering come to Nokia's solution.

Nokia Internet Radio has two opening modes: Collections (sorted by region, language, or by recently played) or Genres. Once you've selected a mode, it becomes your default opening mode until such time as you choose the other one. To switch, just use 'Options' on the opening menu and tap on the top option etc. Genres is a better way into new stations, while Collections offer a quicker way into 'Favourites', which I'll come to in a moment. 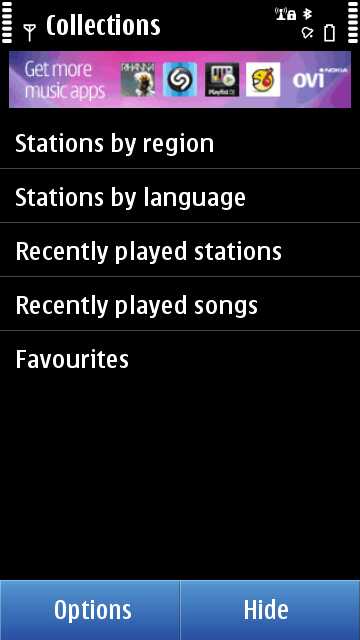 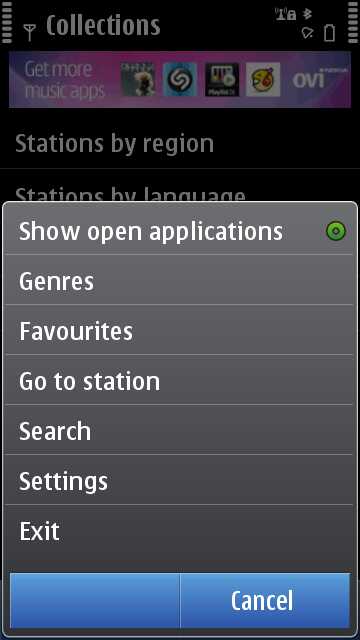 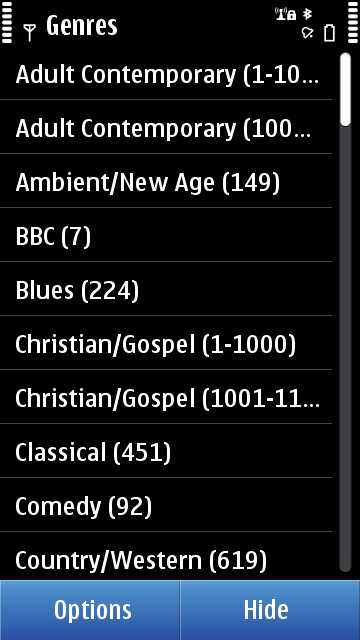 In fact, there's slightly more to the opening mode than this, since if you leave the application in 'Favourites', this also can be shown as your first view - but it's slightly deprecated below the main two modes, as evidenced by a big 'Back' button to take you to Collections or Genres.

3. Start with some quality stations

Because of the overwhelming number of Internet radio stations, you don't want to get bogged down initially in poor quality rubbish, DJed by some guy you can't understand. So I though it might be helpful to suggest a few stations to search for ('Options>Search'). In alphabetical order only, pick a few from this list and you won't go far wrong: 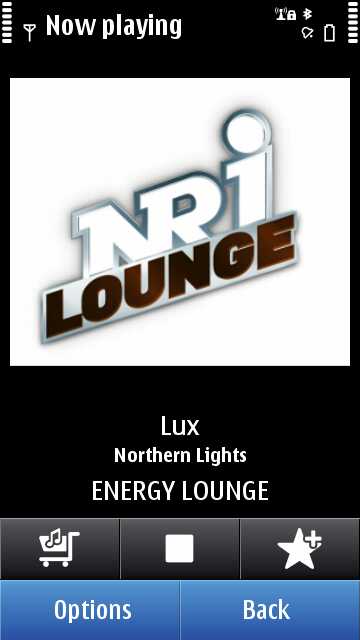 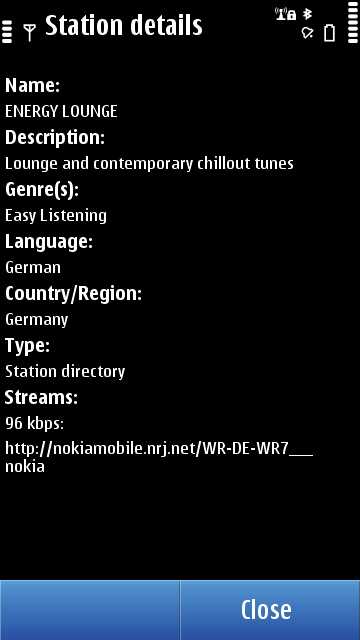 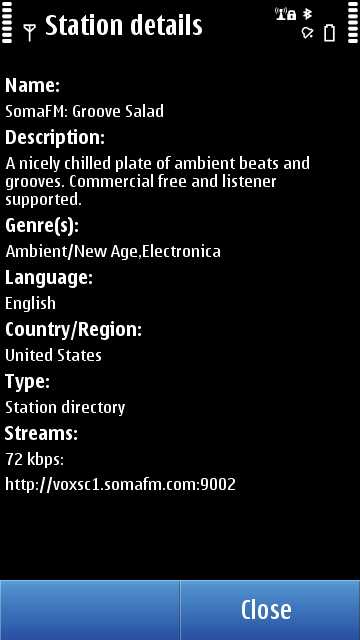 As you discover an Internet Radio station that you love, tap the star icon ('Add to favourites') and this makes it a hundred times easier to get back to it again later amidst the aforementioned tens of thousands of other stations clamouring for your attention. Saving favourites really is the key to making Nokia Internet Radio a useful and enjoyable part of your daily life because you can get to a station in a second or two at most.

To manage your favourite stations later, perhaps to remove one, long press on any in your list and you'll see the option to 'Delete' it. 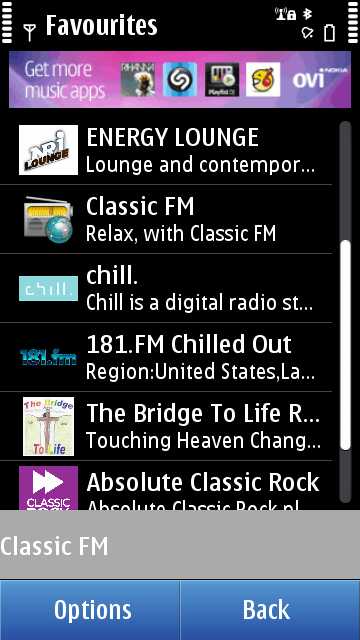 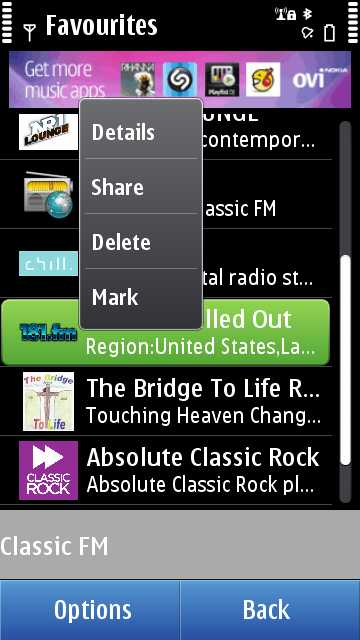 A common scenario is that you hear something you like, either a station and you forgot to add it to your favourites, or a particular song and the station's now moved on to the next one - what was the one you liked?

Nokia Internet Radio keeps track of both scenarios for you. Head to the 'Collections' opening menu and you'll see 'Recently played stations'. Every station you've played will be neatly tracked there, just tap on the station you want. And remember to add it to 'Favourites' this time round.

Similarly, the last 50 or so songs that have been played, even in part, on any station you've tried, are also logged. The ID of each song is transmitted as part of the data stream from the station, so it's easy for the software to keep track. What's not so useful is the link up from there to Nokia's Ovi Music, which (let's face it) is unlikely to stock more than a tiny fraction of the music you come across. Still, at least you can log the artist and track names and then go Google them. I did the other day and found a totally new artist that has become a firm favourite.

6. Plug in some bigger speakers!

One issue with Internet Radio is that it's often perceived as not being of very high sound quality. There are two reasons for this. One is the low bit rate used by some stations - which you can do nothing about. The other is that Internet Radio played over a smartphone's speakers is naturally going to be limited by small and tinny speaker cones (yes, even on the power-amped N8). Unless you happen to own the Nokia 5800 or X6 (with their large stereo boom box speakers), why not try out plugging in some desktop or travel laptop speakers into your phone and running through your Internet Radio favourite stations? You might be surprised at the quality. At the very least, it'll help you sort the wheat from the chaff in terms of streaming quality.

Bonus tip: There are other Internet Radio applications in the Ovi store, if you want to play further. TuneWiki stands out as another Shoutcast radio player, but with wider stream compatibility and the ability to bring up lyrics in real time for some songs. And many of the larger Internet Radio broadcasters have their own 'apps', providing a more focussed streaming experience. Searching for 'radio' in the Ovi Store is a good start.

Steve Litchfield, All About Symbian, 3 April 2011

Filed: Home > Features > How to: Six tips for getting started with Nokia Internet Radio