Smartphone developers CrazySoft are back with another graphic adventure game for S60 3rd Edition devices, called The Final Battle. Their last adventure was disappointing, but this time round they've made some great improvements. Are they enough though?

Yet another S60 game from CrazySoft, and this time it's a return to the adventure game genre. Their last attempt, Lost In The Pyramid, was a bit of a disaster, but it seems that CrazySoft have learned a lot of lessons about game production since then, and Final Battle is miles better. How much better? Read on to find out...

What's it all about? 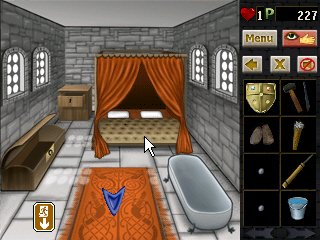 Final Battle is a graphical point-and-click adventure game which mixes elements of Lucasfilm, Sierra and the slightly more obscure Deja Vu games. Adventure games are a bit of a rarity nowadays after their 1980s and 1990s heyday. If you've never played one, you deduce what you're meant to do from clues in the text and graphics of the game. This means slow but very intellectual gameplay, and a great feeling of reward when you finally solve a puzzle.

As in Lost In The Pyramid, your character is never really visible, just represented by an arrow, and the focus in the game is on the environment around you. The game begins with you in a prison cell with no memory of who you are or why you're there, with your first task being to escape.

The setting is a standard European medieval fantasy land, although the developers clearly don't mind throwing in the odd humorous anachronism here and there (your house has an American-style mailbox full of bills and junk). 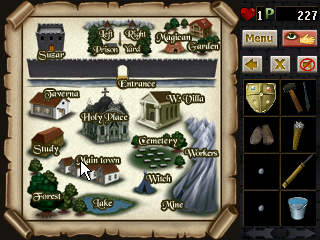 You play the game through a pointer, which lets you click on items, places and people to examine or interact with them. There's also an inventory permanently displayed on the right of the screen, which lets you choose or combine particular objects. You can leave your current location by clicking on one of the exit signs, which will either take you to an adjacent location or back onto the main game map. Once you're on the map you can go to a particular place by clicking on it.

Puzzles are a mixture of straightforward logic and relentless exploration, with the occasional mad, twisted solution thrown in for good measure. Did you know that the best way to pick oily flowers is to stick a wooden wedge in some cow dung, and then stick the dirty wedge in the flower bed?

The game's own responses and dialogue with other characters has a good knowing humour to it, which is quite amazing when you consider the game is being simultaneously released in English, French, German, Greek, Italian and Russian. We only reviewed the English version, hopefully the other languages are just as good (presumably the Greek one is excellent as CrazySoft are from Greece). Pay attention to the game responses and dialogue, there are many clues hidden away in there.

At first you may think the game world consists entirely of the jail you're in, but once you've broken out a much larger map opens up with many more locations. This is a very large game packed with gameplay, and adventure fans will find a lot of puzzles to get their teeth into here. Once you've escaped the prison the game becomes fairly freeform, although certain areas remain closed until you've completed certain puzzles.

Final Battle is player friendly, there are no actions which lock you out of winning, and "death" merely means the score is reset to zero, you can always carry on from where you left off. Thanks to an autosave feature, when you next start the game it will return you to wherever you were on the last exit.

The one complaint this reviewer would make about the interface is the speed of the pointer: it's too slow! It can be frustrating when you know exactly what you want to do, but you have to wait 2 or 3 seconds for the pointer to go from one side of the screen to the other. (UIQ3 owners should note that there's a UIQ3 version of Final Battle for them too, which presumably avoids this pointer problem by using the touchscreen.) 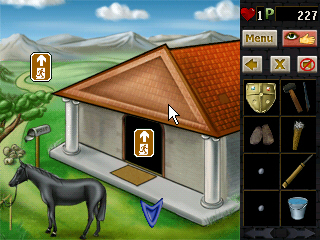 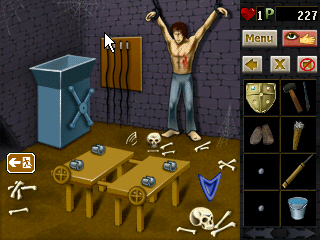 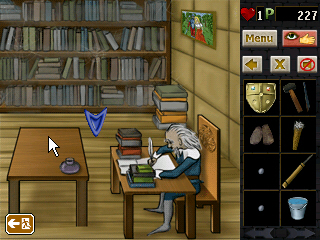 Final Battle has nice, consistent artwork with a colourful look and feel to it. The shading is nice, and it has the feeling of a book of fairy stories, with rolling green hills, knights sitting in taverns and markets with blacksmiths in them. Some of the illustrations do look like they're intended for children, but they're original, they suit both the adventure genre and the fairy tale setting, and it's all a vast improvement over the clipart obsession that ruined the previous game.

Some of the puzzles actually require you to examine the graphics very very carefully, and you may have to click on certain small areas of the screen in order to pick up an object or interact with something.

Another improvement is that locations have been locked down to single screens, there's none of the jerky scrolling of the previous game. Exits from a location are clearly marked, and moving from one screen to another is simply a case of clicking on the exit icon. 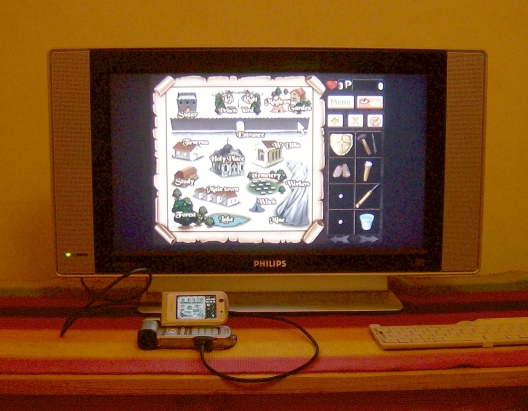 Contrary to expectations, Final Battle is a good adventure game which can be recommended to anyone interested in the genre. There's no simple-minded action here, the puzzles do demand that you think about them so you can solve them. But if you're into adventure games then that's exactly what you want to hear.

PS: You can see a video of The Final Battle in action over on the Unofficial Nokia Gaming Blog.

The game reviewed here was the Symbian S60 3rd Edition version of The Final Battle. It was reviewed on a Nokia N93. The screenshots are taken from horizontal mode, but the game can also be played in vertical mode.

The Final Battle for S60 3rd Edition can be purchased by clicking here.

There is also a UIQ3 version of The Final Battle.