The biggest 'improvement' (you'll see the reason for the quotes as you read on) for the Satio, when compared to the Nokia 5800, the most comparable competitor, platform-wise (i.e. vanilla S60 5th Edition), is the inclusion of a proprietary media suite, written in a way that totally ignores most of the rest of the phone's interface. For example, it ignores themes - Media suite is resolutely black, rather annoyingly, i.e. you set up something bright and colourful and then both homescreen and media suite stay blacked out. However, I guess the media suite is consistent with other Sony Ericsson phones that have gone before and uses a fairly obvious 'direct manipulation' metaphor (e.g. iPhone-like), so finding your way around is rarely a problem.

Within each media suite pane, top and bottom toolbars fill with icons (up to eight in all, in extreme circumstances) - if the thing you want to do can't be done by just tapping on the media item in question then you can usually find an icon for it on one of the toolbars. Like most of the rest of the Satio interface (excepting the homescreen, strangely), the media suite functions work just as well in landscape mode (by turning the device on its side). Most screens twirl, slide and jiggle into place here, with good use being made of the graphics power under the hood. 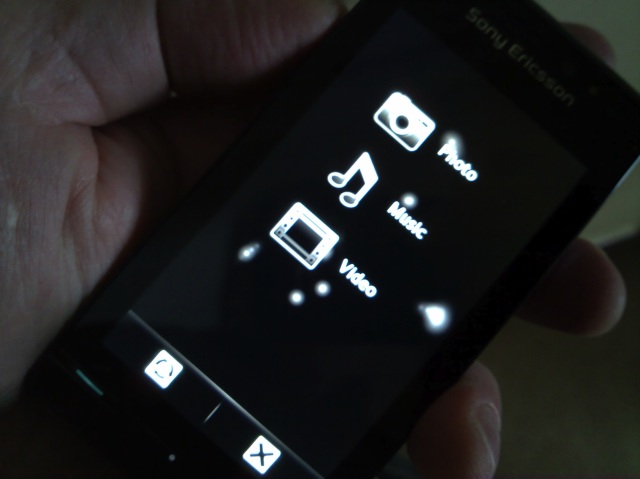 Clearly modelled after the Apple iPhone's interface, there's full kinetic display of your camera album, split initially into monthly segments but all really one continuously draggable photo strip using the touchscreen. Tapping any photo brings it up full-screen - if it's landscape and you're holding the Satio in portrait mode, you have to rotate the device for best effect - the accelerometer then detects the movement (as you'd expect in a 2010 device) and re-displays the photo in landscape. Ditto for portrait, but the other way round. 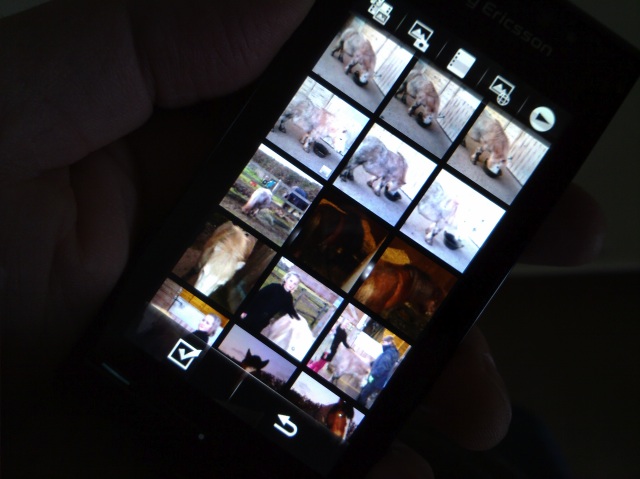 Although there are no zoom icons shown/available by default, the volume/zoom keys on the Satio's side do work (and, curiously, zoom icons appear on-screen after you've started the process off with the buttons), with a small corner thumbnail showing where you 'are' in a photo when zoomed right in. Zooming performance is good, as you'd expect with the powerful graphics chip inside the phone. 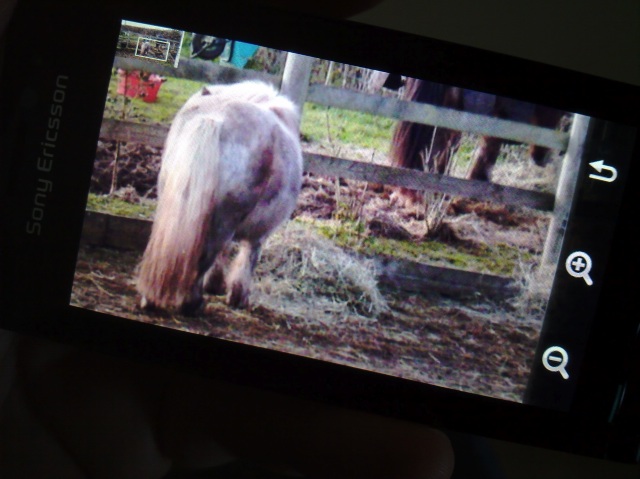 Along the bottom (or right, if the phone's in landscape mode) of the screen are four icons, mimicking a traditional S60 left-Options, right-back layout, with the addition of 'Send' and 'Delete'. The Options menu turns out to be a pane of icons, but the functions are largely the same. In truth there's little that's new here, aside from the eye candy animated swirls that swish around underneath the thumbnails when looking at albums. 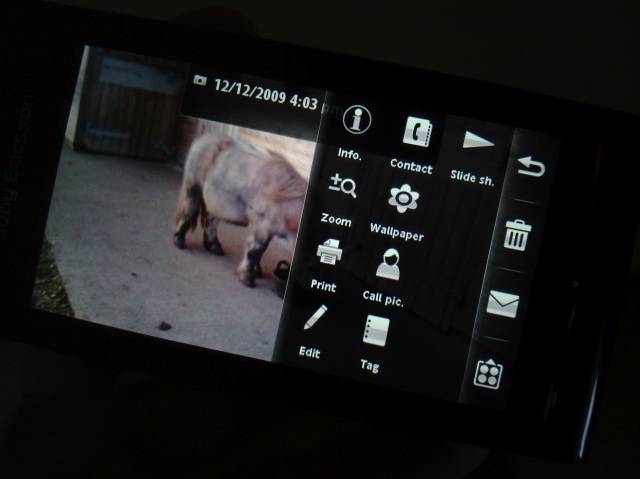 Annoyingly, just as with almost every other Symbian-based device from the last 4 years, Photos actually shows phone-shot videos as well, making something of a mockery of having a separate 'Videos' section in the media suite. There's also some separation between types of image, with those that haven't been shot by the Satio's camera appearing in their own 'Pictures' section. It's all a little artificial but should provide enough organisation for the average Satio buyer.

In similar fashion, there's nothing new in the music player, apart from the cosmetic reworking, with the traditional textual menu now represented by a pop-up pane of icons. Underneath the skin, it's still S60's Music player and has the same quirks (e.g. horribly unreliable album art). Although there's no 3.5mm jack built into the Satio, the proprietary lead does have a 3.5mm breakout jack at its other end. The Satio comes with a cheap pair of in-ear headphones that are tinny and unpleasant to listen to, but binning these and plugging in a decent set solved the problem and proved that the sound exiting the Satio itself was quite decent. 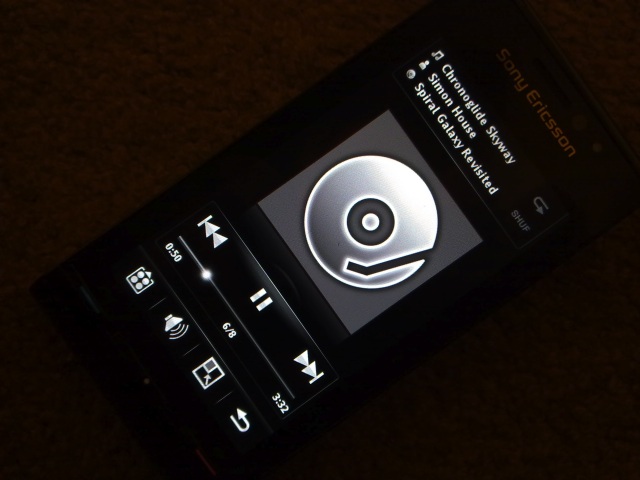 As on Nokia's X6, also without a physical keypad or keyboard, there's no way to find music while in the Music player module. Instead, to search for a song, you've got to back right out to the main S60 Search function and then wait an eternity (you'll remember that Search is horribly flawed on the Satio?). As with the X6, given that the Nokia 5800 and the baseline S60 5th Edition code both had a 'Find' function built-in, it's criminal that this has not been implemented here. 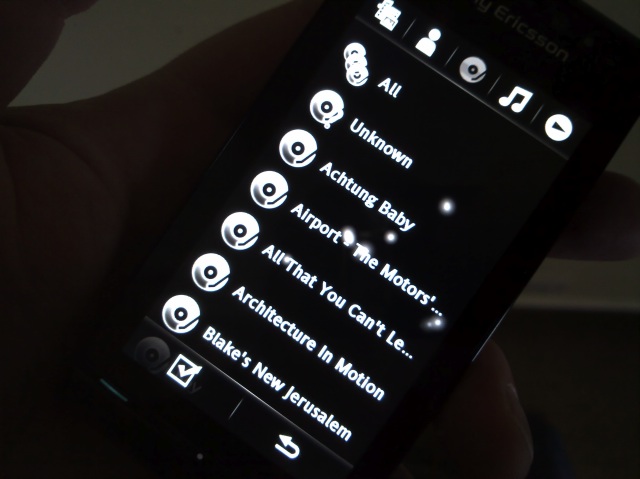 Sadly, unlike Nokia's Nseries S60 phones, there's no EQ here to play around with - what you hear is what you get. There's just a single speaker for direct listening and this is a bit 'flat' in sound, but is OK for spoken word podcasts. Or would be if there were a podcatching app included....

The inclusion of Podcasts in the Music menu looks promising, but it seems this is just a filter for music files on your microSD which happen to be tagged as podcasts - there's absolutely no mechanism to automatically grab new programmes (as in Nokia's Podcasting client, also licensed by Samsung). Disappointing, but a workable system as long as you're happy researching and downloading podcasts on your Windows PC. There's the third party Escarpod, of course, worth experimenting with.

In addition to videos stored locally on your microSD card, you're also offered access to the S60 YouTube client and the BBC iPlayer widget here (I presume the latter wouldn't appear in a non-UK model). Very handy for new users, although the usual caveats over video quality and connection bandwidth/costs apply, of course. The latter also features programme downloads, so kudos to both Sony Ericsson and the BBC for liasing over the right DRM certificates. 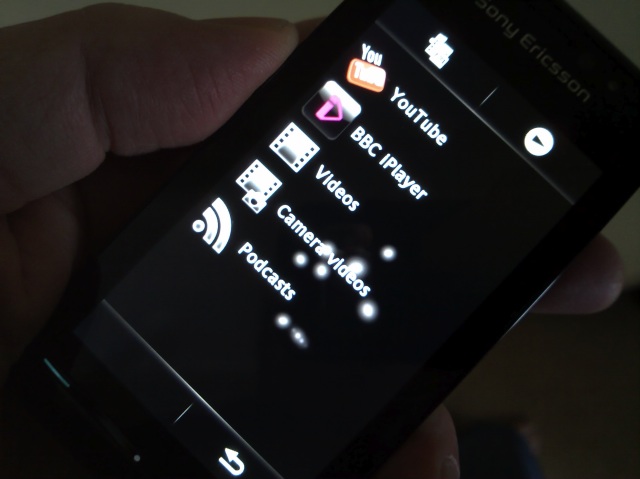 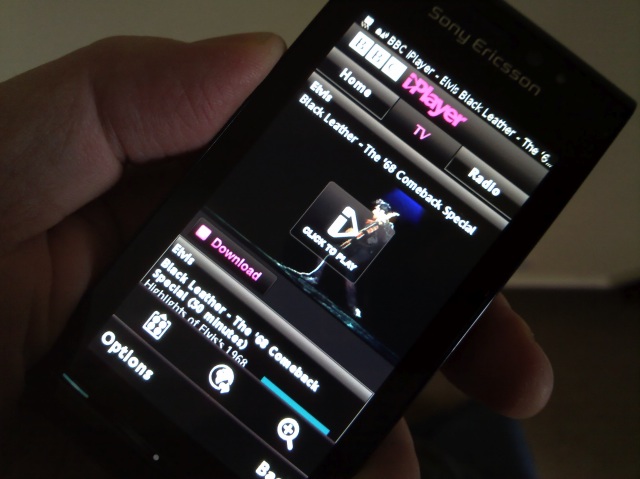 It's in the video player that I encountered my first showstopping Satio bug and it's one that continues to plague me. Titles of local videos are displayed correctly and can be started playing, with roughly the same (rather poor) compatibility as on the likes of the Nokia N97, i.e. most flavours of MP4, 3GP, WMV and FLV in sensible resolutions and bitrates but having nothing to do with DivX in any shape or form. But, and this is a huge BUT, having played all or part of a clip, if I tap on the 'Back' icon, the custom Sony Ericsson video player software freezes solid and nothing can be done with this module (see the Crash Zone below) until the phone is powered off and on again. The bug appeared to go away for a while after installing the R1C firmware, but it's well and truly back now on the review unit. Very annoying. I'm sure there's some pointer getting lost somewhere in the code and it will be a one line code fix for the next firmware, but in the meantime it just shows the Satio off as being very buggy. 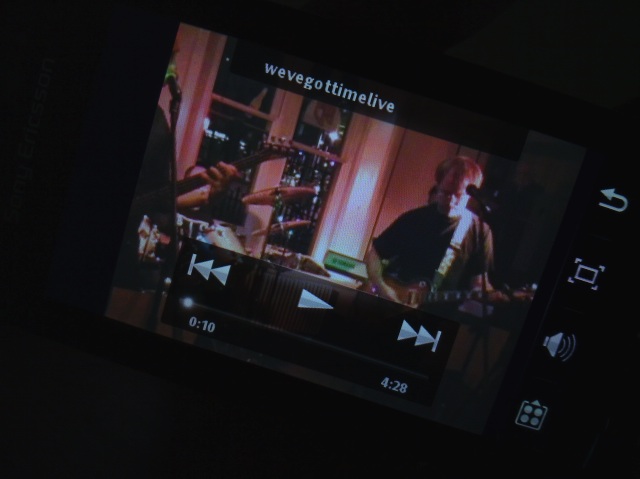 As proof (if it were needed) that I'm not making up my reports about buggy firmware, here's a selection of photos for your interest: 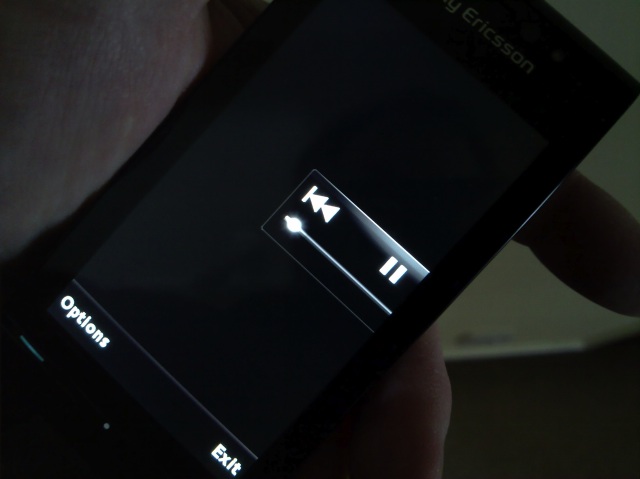 Here's just one example of the screen corruption and unusable interface left behind by the media suite crashing after playing a video... 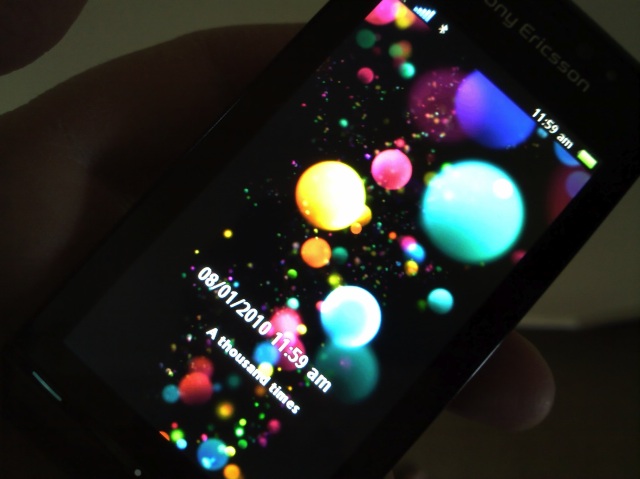 No, not a minimalist home screen, just one in which so many elements are broken that they don't display.... 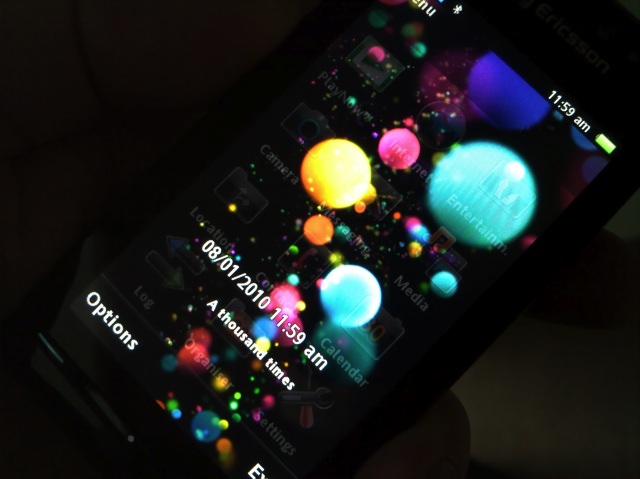 And then things get worse, as a few button presses later, you see the main S60 menu and Sony Ericsson homescreen both trying to display at the same time....

The one constant in the smartphone world since its inception (with the Nokia 7650 and Palm Treo 180, arguably!) is that no device is perfect. There are usually a number of distinct positives, a few innovations, some nice styling points and.... a few downsides, ranging from mild annoyances to complete showstoppers. These attributes, in the Satio's case, read as follows:

The ratio of good to bad in a hardware review on All About Symbian is generally at least 2 to 1, so it's disconcerting to find so much that I didn't like in the Sony Ericsson Satio. The potential good news is that the last four 'bad' points are all software-related and can be fixed by Sony Ericsson if they choose to put the resources behind this handset. With their Android-powered X10 on the way, it would be a shame if this took manpower away from improving their Symbian flagship. 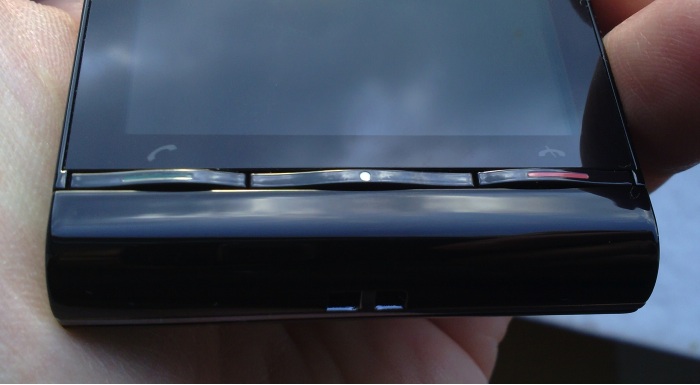 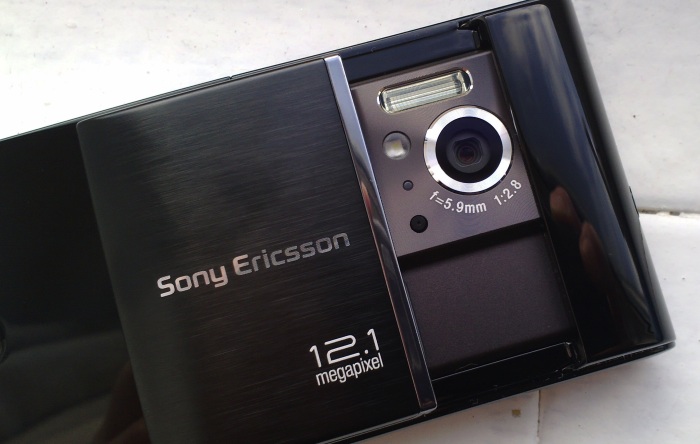