See also Part 1 of this review, by Rafe, looking at the E75's hardware and general design.

Leaving aside my own personal feelings about the Nokia E75's hardware design, there's no doubting that some elements of its specification and implemention make for better multimedia than we've seen so far on Nokia Eseries. Partly this is down to the use of S60 3rd Edition Feature Pack 2, which brings additional codecs and multimedia routines, but credit must also be given for the inclusion of a surprisingly good camera/sensor, seemingly better even than that in the flagship E90.

Despite this compliment, Nokia don't seem quite so sure of the multimedia aspects of the E75, hiding almost every function inside a (cunningly disguised) 'Media' sub-folder inside a general 'Applications' folder. Still, the functionality is there, from Camera (of course) to Radio to Music player to Video centre to Podcasting. All of these applications will be very familiar to S60 users but, as ever, it's great to see what were once Nseries exclusives now firmly in the firmware of the business-focussed Eseries. 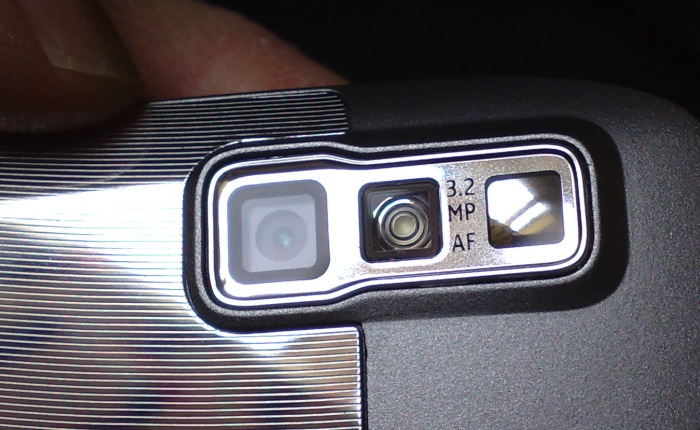 When I saw that the E75 came with a 3.2 megapixel camera with LED flash and non-branded optics (i.e. not Carl Zeiss) I was put in mind both of the E71 and the E90. In theory the specifications are the same, but the quality of the components (mainly the sensor) are higher than those in the E71's camera, while the software algorithms are more sophisticated than those in the now-ageing E90. The end result is the best camera in a Nokia Eseries phone to date.

Here's a brief gallery, culled from photos from myself and Rafe. In each case, click through for the photo at full resolution: 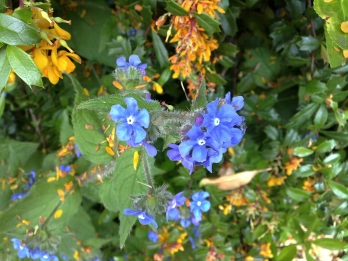 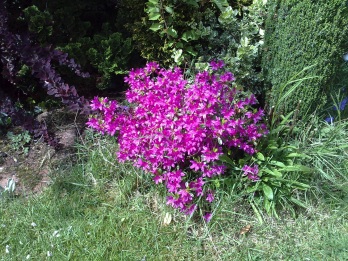 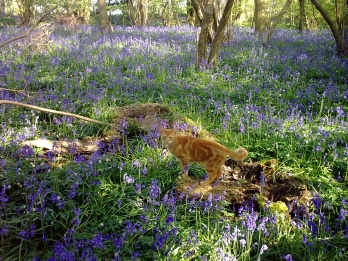 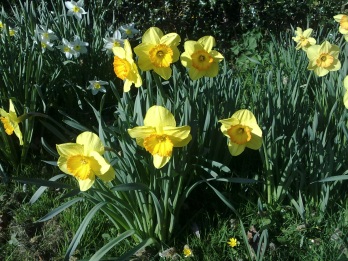 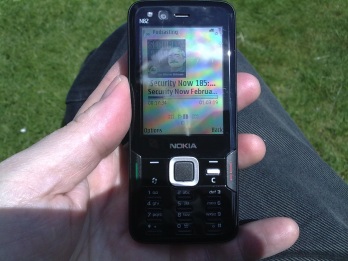 Some impressive photos in that bunch, though all were taken under good natural light. Still, the colours are great and there's little over-saturation, as it common with cheaper camera units. As I've proved in the past, you can do a lot with 3 megapixels and it's certainly quite good enough for printing out photos at 6" by 4" or viewing on a PC screen or TV.

And all this on a phone which rather deprecates its camera and multimedia. In addition to the hiding of the apps, there's the bizarre positioning of the camera shutter button, almost midway along the top edge, where it's tricky to squeeze the shutter closed without partially opening the E75's QWERTY keyboard (because of where your thumb braces itself for the pressure, though you do get used to the handhold needed in time). All of which make the photos all the more spectacular.

But how does the E75's camera, as good as it is, compare to identical shots taken with other well known camera-toting Nokia smartphones? Let's run a few tests. First of all, here's the same pond scene, taken on the E75 and the (five megapixel, Carl Zeiss-lensed) N82 and with the central region (showing the sign) blown up so that we can see the differences: 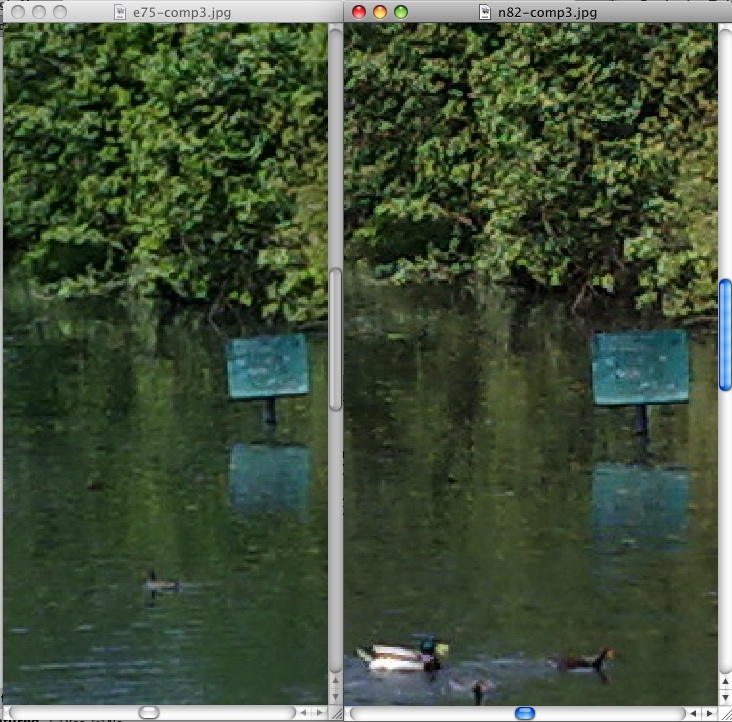 Not bad at all, the overall level of detail in the blow-ups is certainly comparable. Is this the best 3 megapixel camera Nokia has yet used? Let's try comparing shots from the E75 to those from the E90, the previous Eseries camera champion. Here's a close-up of an indoor shot of a digital radio: 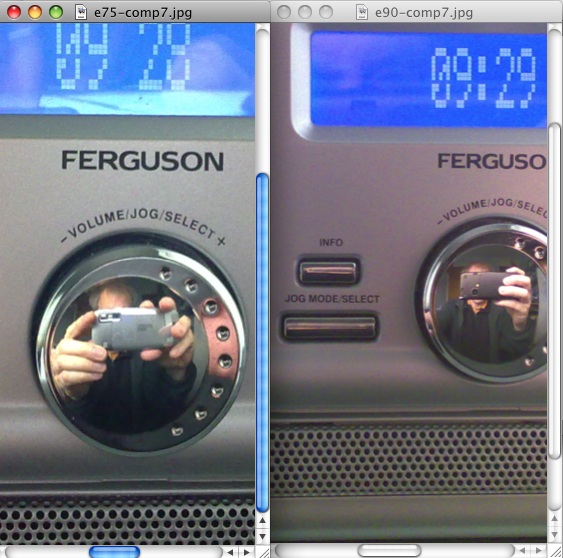 Disregarding the differences in the angle of view, the E75's photo is a lot clearer and sharper. Let's try an outdoor shot, of my r/c plane taken in overcast conditions: 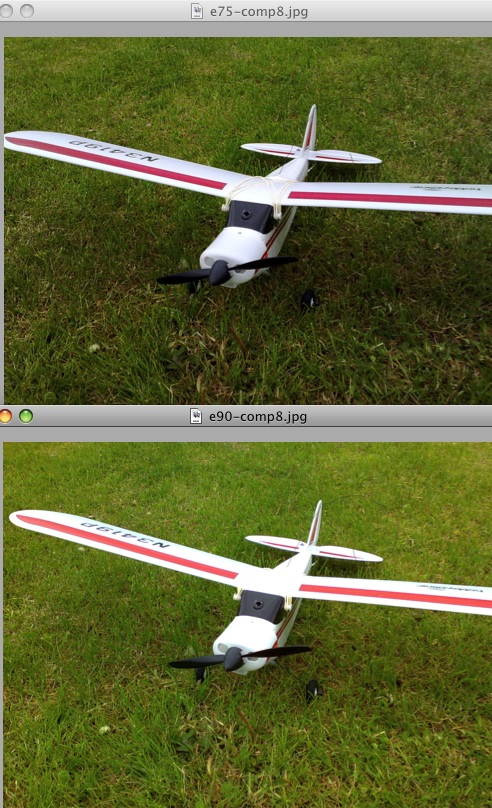 At first glance, the E90's photo looks much better, with more pleasing colouring, but in the E75's defense, the sun wasn't out and the grass certainly wasn't that saturated a shade of green. Moreover, if we look closer at a detail: 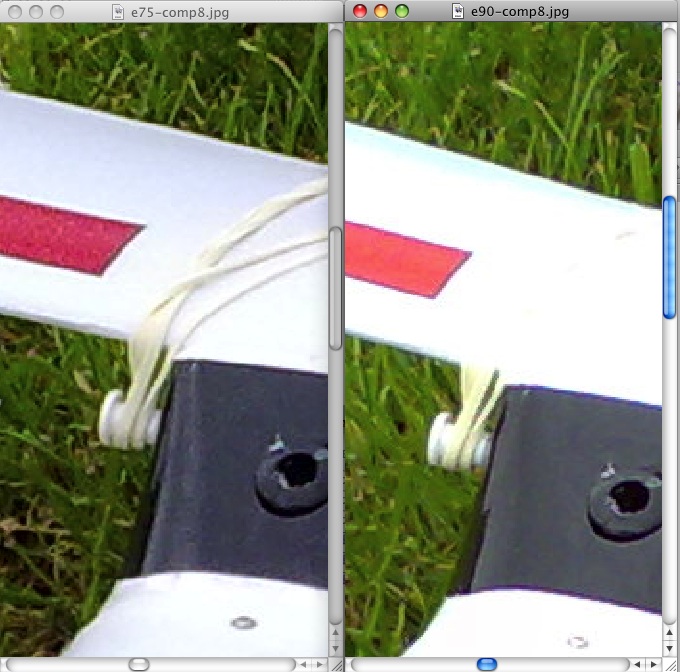 You can see that the bands holding the wing on are clearly picked out by the E75's lens and sensor but are invisible on the E90's photo because of the over-saturation/over-exposure. So, another win for the E75.

Both the E75 and E90 have a single LED flash, which means that neither produce very good photos, in comparison to Xenon-equipped phones like the N82 or even compared to dual LED flash phones like the budget N79.

Still, there's no doubting the Nokia E75's camera performance in reasonable light conditions - it's possible the best 3 megapixel camera I've seen on a phone, taking into account both the hardware (sensor) and the now-mature Nokia Camera software.

Video quality is harder to quantify (in a text piece like this), but here's a sample, for your interest, click it to download or open the MP4 file etc: 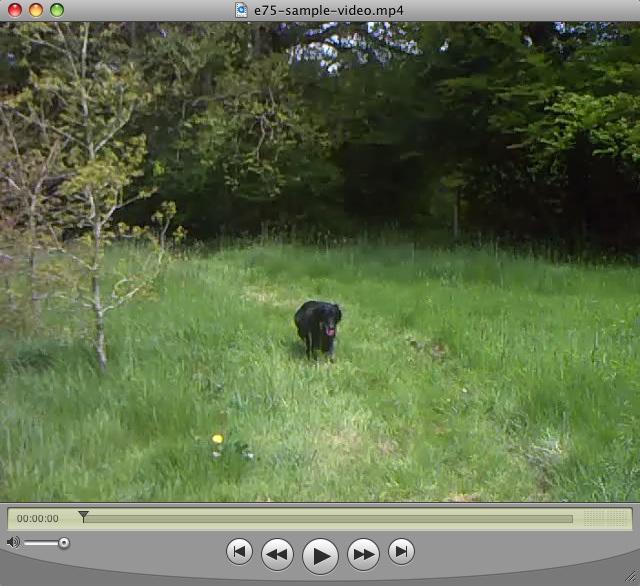 As with the E90 before it, the E75 records video at full VGA and at a full 30 frames per second. In other words, the same as the N95, N82 and most top Nseries devices. There's no branded lens, so quality doesn't quite match that of (e.g.) video from the N95 or N82, but it's close enough for most casual use (there's no TV out, by the way). Captured audio is good too, certainly up with that from the E90 and many Nseries phones. As with still image taking, I really can't see any E75 owner complaining that video taken on it isn't of high enough quality.

Of special interest is, like the E71, the LED can be turned on as a 'video light', making taking ad-hoc videos possible of close up subjects in dark conditions. The results aren't brilliant, but they're better than on the E71 and hey, at least you're shooting and capturing a moment, whereas on older S60 devices (or the N82) you'd be stuck with the ambient lighting and perhaps struggling more. The only caveat is, as I've mentioned before, the LED video light is (literally) dazzling for your subjects (relative to the surrounding gloom) and you will get complaints! 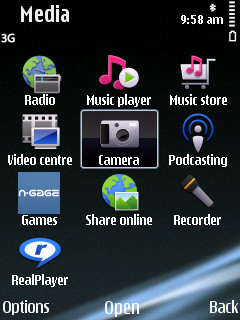 As with each successive version of S60, 3rd Edition Feature Pack 2 brings extra multimedia codecs and compatibility, compared to the version before. We've now got to the stage that most MP4, FLV and WMV videos can be handled in the OS and presented at a reasonable frame rate, with no silly compatibility issues or complaints about audio or video. This is the first Eseries device to feature FP2 and as such has better multimedia performance than previous phones (e.g. the E71). 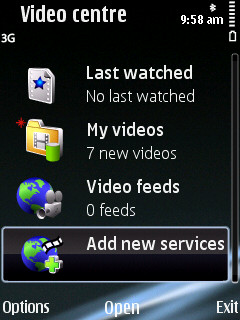 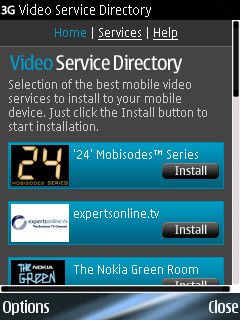 The presence of Video centre isn't surprising in 2009, although I still find the duplication of functionality between this and Gallery somewhat irritating. The idea of being able to plug in different mobisode/trailer video feeds is a good one, but most people will get far more out of the free third party YouTube client.

The biggest limitation on video consumption on the E75 is probably the small screen, which pales compared to newer efforts like those on the Nokia 5800 and N97. Surely, in 2009, it's time to break away from QVGA, 2.4" screens now?

Music, Podcasting and other Audio

As with (almost) every other smartphone since about 2005, music quality over headphones on the E75 is good enough for most people - the biggest limitations are the quality of the headphones being used and your ears. There's only one loudspeaker in the device itself (on the rear housing) and it's predictably phone-like in terms of response, though at least decent volumes were possible.

Nokia Music player itself is rather bare bones by modern standards, but does the job, including a custom equaliser. 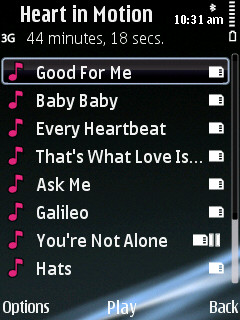 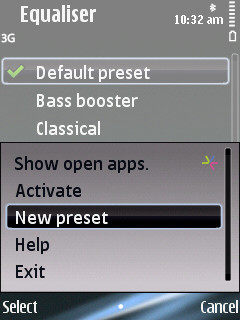 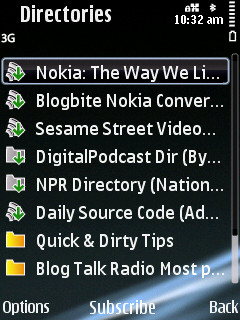 The presence of a 3.5mm jack is the single biggest boon here, after the 2.5mm 'smartphone audio' jacks of the E71 and E90, to name but two... Being able to slap any pair of headphones in without fussing with finding an adapter is very welcome indeed.

Podcasting is also present, now standard with Eseries phones and one of my favourite uses of a Wi-Fi-connected smartphone. There's a bit of a learning curve in its interface but, once mastered and set up, you're good to go for offsetting boredom forever.

Although there are no obvious music controls, the canny E75 user will do what I did and assign Music player and Podcasting to 'long presses' of the Calendar and Email one-touch keys. Thus, each app is only ever one keypress away - a neat solution.

The default way to transfer music onto the E75 is via MTP compatibility and Windows Media Player, but it's also easy enough to connect the E75's memory card as an extra disk on your desktop and to simply drag and drop music folders (MP3, WMA, ACC, eAAC+, etc) on as needed. There's also the Nokia Music Store client - this is very handy for grabbing (i.e. buying) specific tracks when out and about, but few owners will want to buy music on a large scale this way - you're hampered by Nokia's restrictive (Microsoft-licensed) DRM. 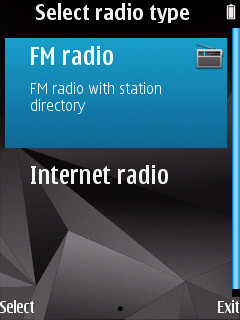 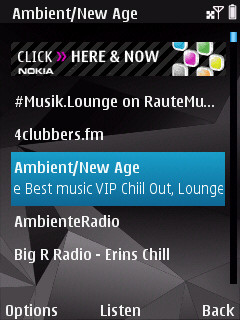 The presence of a 'Radio' shortcut isn't a surprise by now on Eseries devices, and it's good  to see the choice here between FM radio and Internet Radio - I'm a fan of both and especially like the way the latter here is built into the firmware and not left for a user to discover on the Internet and add later. Of interest is the fact that Nokia's new 'Here and Now' portal is a permanent advert at the top of every genre listing - I suspect that we're going to see more from this service.

'Recorder', the standard (simple) voice recorder utility, rounds out the audio offering on the E75.

The E75 for multimedia

In summary, while you wouldn't buy a Nokia E75 for its multimedia prowess, it's certainly not going to disappoint. The only hardware design point that impinges on multimedia capability is the small size of the screen - everything else is quite good enough for the majority. The fact that the E75's camera is much better than that in the E71 points more towards below-par software in the latter, but it's nice to see a S60 3rd Edition FP2 Eseries that has this area not only covered but mastered (within the limits of the camera unit fitted).

Stay tuned for part 3 of our Nokia E75 review, including a view from the point of view of business/the enterprise.