You'll have some of my thoughts on the multimedia capabilities of the Nokia E71 in my main All About Symbian review. Here's a much expanded version...

Now, I know at this point the Eseries marketing people are going to leap up from their chairs and say 'But you can't do a feature on Eseries multimedia - that's not what we built the device around!' However, talking to the same marketing people at the E71 launch revealed that a significant number Eseries devices sold so far have, as far as they can tell, been to private customers rather than businesses. Doubtless these customers had their professional needs in mind, but the fact remains that there are still a lot of people who want an Eseries phone for its own merits and not just because some IT manager bought a job lot to integrate with his precious email server.

Merits which include extra solid (usually metal-based) casings, large batteries and clear screens in all light conditions. Oh, and (sometimes) qwerty keyboards. There's a lot to like, which is why the likes of the E51, E61i and, yes, even the E90 have sold well across the world.

But however professional the user, they'll want to take photos sometimes, they'll want to take short videos, if only because their smartphone is their only device - or at least the only device they're likely to take everywhere. So it does matter how good or bad the camera unit is on the E71, in this case. There must be a lot of people with older Nseries S60 phones who really fancy the qwerty thumb keyboard and huge battery but are unsure whether their photos are going to take a turn for the worse.

Likewise, music playback is now universal, even if it's just for casual listening on the 30 minute commute, twice a day. And video playback is becoming more common, albeit usually in streaming 'on demand' form. So how well does the new E71 cope with all these extra non-business tasks? Let's find out.

As mentioned in the review, I have to admit to being a little disappointed by the camera - I'd been hoping for the same 3.2 megapixel unit that featured in the E90. Instead, we get a small lensed 3.2mp camera (to bang the gong yet again - it's not all about how many megapixels a camera has) with comparatively cheap optics and sensor. You can see in the examples here (click to open full-size) that in bright conditions contrast is handled relatively poorly. Indoors, the images are digitally noisy, even with the LED flash, as you'd expect from such a small lens. No worse than in the cameras in many other smartphones, but worse than the E90's camera and a lot worse than that in the likes of the N95.

Let's take some of the images from my review... click each to open full-size...

From the review: "Focussing itself is handled in semi-automatic fashion and I'm somewhat impressed by how much flexibility this gives the user. Previously a smartphone user had to choose between a focussing camera for which you had to wait a second or so for focussing and for which you really needed a static subject, and a non-focussing camera that was great for instant shots (i.e. it didn't need to wait and focus) but for which anything close was blurry. With the E71, you can press the D-Pad to take an instant shot or press the 't' key (beneath the D-Pad) to focus if needed, after which you then press the D-Pad to snap, etc. I thought I'd hate this solution but in fact it's proven very flexible - you really do get the best of both worlds."

The above samples were taken with a view to finding the limits of the E71 camera. Here are some more general photo samples from the E71, with comments:

What I was especially interested in was comparing the E71's 3 megapixel images, taken with cheap optics and sensor, with 3mp images taken by the Nokia N95 (in 3mp mode, obviously), with its Carl Zeiss optics, larger lens and better CMOS sensor. When I took the photos above, I also took the identical scene with the N95 and then zoomed in to 1:1 level to compare detail in the photos from the E71 and N95:

The biggest disappointment of the imaging side of the E71 is that the old, old version of Gallery is used - this is slow, unattractive and klunky and I can see no good reason why it's still here in mid 2008.

For video recording, capture is at the new 'phone' standard of QVGA at 15 frames per second (i.e. YouTube-friendly), although the optics are pretty good for this sort of work and the captured soundtrack is of much higher quality than similar video-recording phones and smartphones. Again though, video recording seems a little weak compared to the E90 (let alone the Nseries super-multimedia-phones). Here's an MP4 recorded sample (click the image to download the MP4 file): 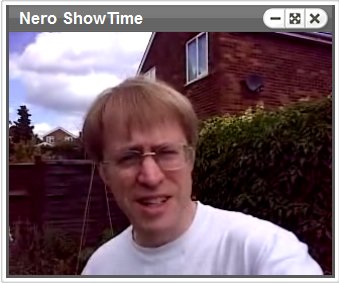 As you'll see, wind noise into the 'wrong' side of the device causes a few issues.
In summary, video capture is OK for strictly casual 'fun' use.

Multimedia on 'Enterprise'-aimed S60 devices has always lagged a little behind the cutting edge and the E71 is no exception. But, to cut it some slack, it's a lot better than on the clunky old E61i. Media handling generally is slightly crippled by a slow implementation of USB, working out at around 1MB/second, or about 10Mbps. However, slow file transfers won't be a huge issue for many typical Eseries users, who arguably tend not to swap their music and video collections around as often as, say, someone with an N95.

Video playback now includes H.264 support, so most MP4 videos will play without problem. I did notice some jerkiness occasionally (there are no fancy 3D graphics chips to help out here, as on the N95, for example) and suspect that there's still some fine tuning to do under the hood for future firmwares. Video on the E71 is still watchable though. Video through Flash Lite 3 on the likes of YouTube is occasionally interrupted by brief pauses while the E71's processor catches up decoding the downloaded data stream. 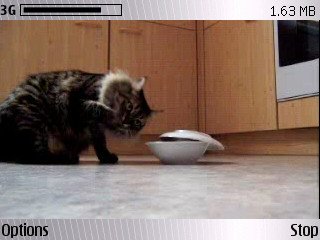 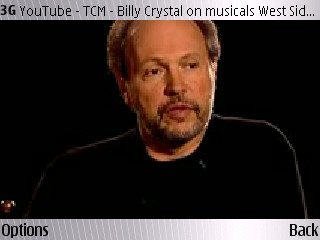 I got similar results from the third party Mobitubia, although this performed better by letting the video download in its entirety and then playing aftwards, when the processor was less loaded.

Music playback is now very good and the E71 as been brought bang up to date in this regard. Using quality headphones (I was trying the BH-101 Bluetooth stereo headset), there's lovely frequency support and volume. Playback via the supplied stereo (2.5mm) headset was acceptable but I liked keeping 'Bass booster' on in the built-in Equaliser in order to hear bass frequencies better. I also tried with a set of Ultimate Ears, with similar results. As we've remarked numerous times recently, music reproduction quality on smartphones is now dependent on how you encode it and on what sort of headphones you listen - the actual device is almost irrelevant.

Absolutely no complaints in this department. 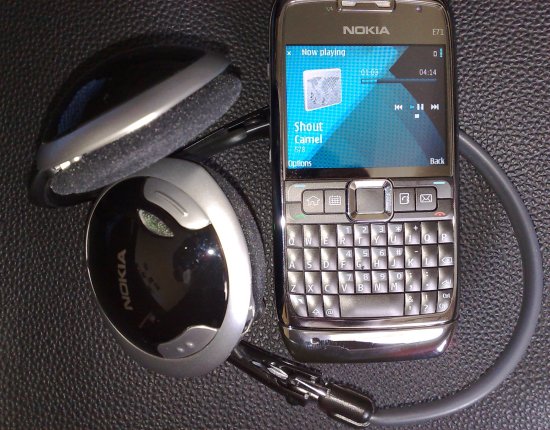 The original Eseries were almost exclusively business-focussed - multimedia functionality got little or no attention. The new Eseries devices represent something of a change. Nokia spokespeople at the launch event noted that a lot of design decisions in the new devices were driven by user feedback and market research - which indicated a preference for better multimedia functionality. There was also a desire to be able to switch off the business functions and use the phone as a personal device. This led Nokia to beef up the multimedia capabilities of the device and create the 'Switch mode' function. However there still remains an important distinction for Eseries devices - business functionality comes first. Thus, especially in hardware, business functionality will always win when there is a compromise to be made. The result is devices that are first and foremost built for business use, but have 'good enough' multimedia credentials at a secondary level.

Rafe and I will be trialling the E71 further over the coming month and will doubtless report back on how the device stands up to intensive real world use.