I've talked in the past about bookmarking specific URLs in order to get to the 'HTML5' (/touch) versions of Google mobile web sites, i.e. the versions that iPhones and Android phones see. All too often, Symbian phones get served up the very low tech 'feature phone' versions of each page - which is a shame when Symbian OS and modern hardware can do a pretty decent job of handling whatever Google serves up. Google HD Browser automates the signing into Google and making sure the right URLs are used, giving - in effect - an (almost) complete Google touch experience. See below for comments on how effective it is and notes on some caveats.

With a touch of hyperbole, the application is described on the Nokia Store as:

Google HD Browser is the ultimate app that let you browsing the High Quality Google HTML5 version, optimized for touch devices, it will brings the best of Google to your Nokia device, and you'll be able to use Google Search HD, Gmail, Google Maps, Google+, Google Translator and much more more... Browsing Google Apps will be easier than ever on your Nokia device.

Which is a touch over the top, but the thought's there and Google HD (Browser) gets closer to this aim than any other solution or set of bookmarks that I've seen yet. I'm presuming the magic happens through Qt web views, a change of reported 'User Agent' and some specially targeted URLs behind the scenes, but what matters for end users is that they see much the same touch-optimised and relatively function rich interface as browsers on iPhones and Android devices would.

Of course, the end result will still be some way slower and clunkier than dedicated applications on each platform. There's a huge caveat in what is reviewed here, in that while using it you have to make allowances - you're effectively using a web browser to access a web interface and there will be a slight delay after each screen tap while the next page is requested and loaded. Once your mind has got round the concept (i.e. "I'm not using a native/local app, so I'll be patient...") then Google HD is surprisingly useable even if never rises into "slick" territory.

Most importantly, for people who are heavy users of Google services and who are now effectively locked out of most of them (especially after the withdrawal by Google of Exchange support), Google HD offers a way 'in' again. Well worth a quid, at least, even if you spend an hour browsing round the interface and then end up dismissing it as too slow or too limited. 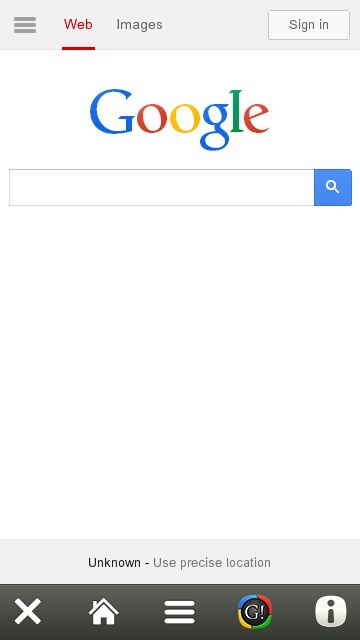 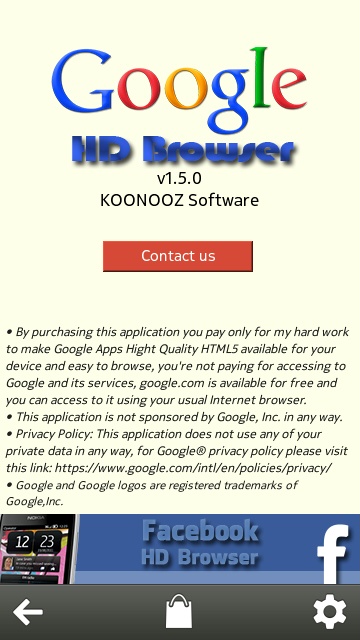 It's the Google Mobile web but not as you know it - honest! Note the Google HD toolbar, which we'll use more of below. For now, here's the "i" About screen - ignore the ad at the bottom, it's the only one in the application. 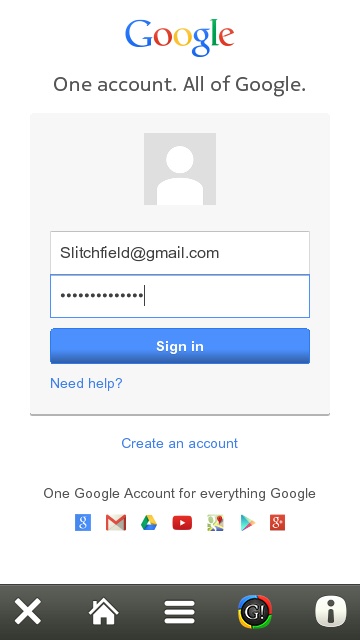 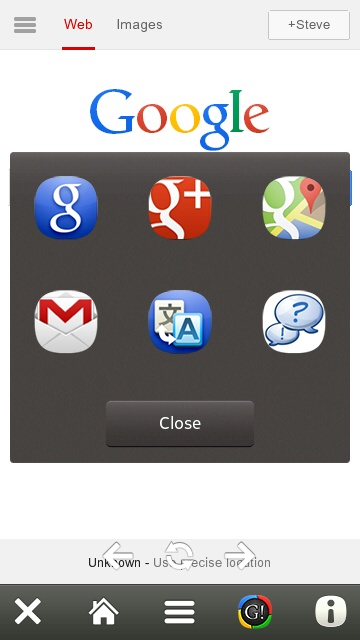 Signing in via Google's own login page is obviously needed, though Google HD thankfully remembers the session and, after launching the application in future, starts you off 'signed in'. (Right) Tapping the colourful "G!" icon on the toolbar is the best way to get started. From top-left, clockwise: Google Search, Google+, Google Maps, Gmail, Google Translate, Google Groups. 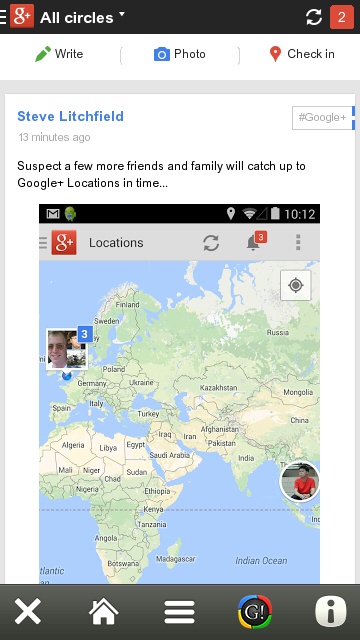 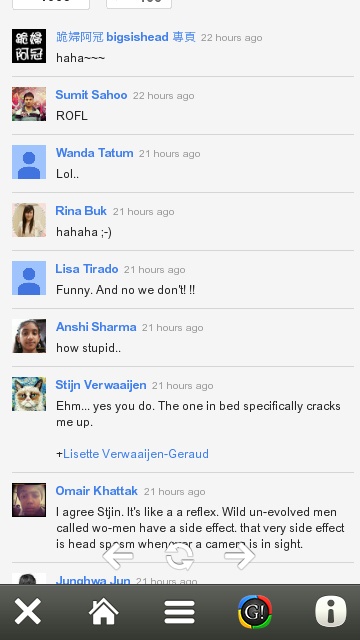 Google+ was an obvious (though unremarkable) place to start, with the familiar interface that's more or less what you get from typing plus.google.com into Symbian Web. Browse posts, interact with comments. Been there, done that before - it's no slick native client but it'll do.

Note the overlaid 'browser' controls near the bottom of the screen - these are overlaid on most of the pages supplied by Google HD and are the way to go forwards and backwards. 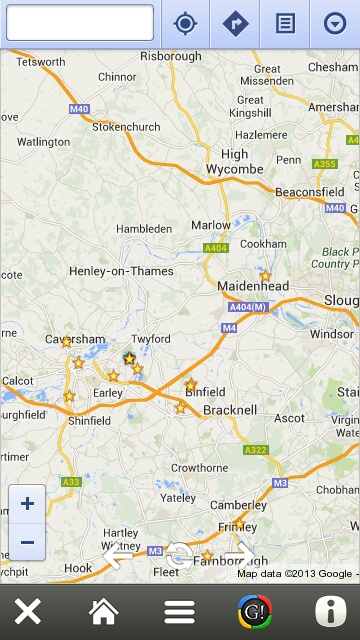 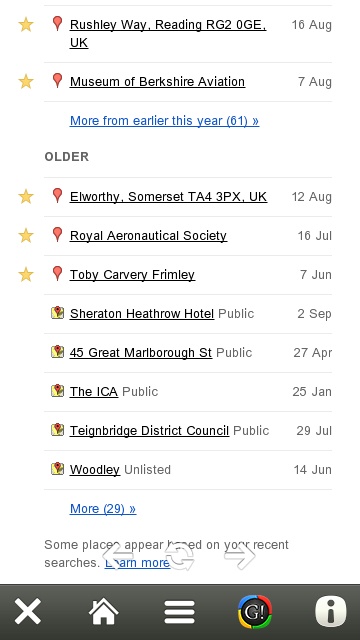 The Google Maps shortcut takes you here, by default zoomed into your current location - though I've zoomed out here to protect my privacy(!) Multi-touch works too, splay/pinch as you would in a native mapping application. (Right) showing 'My Places', a list of favourite or recently visited locations, helpfully supplied by Google's servers. Gulp - now you can all see where I've been.... 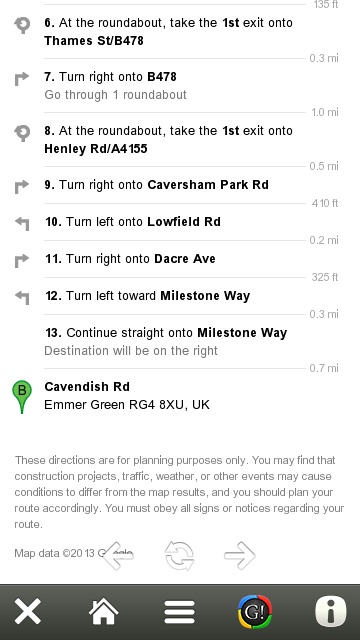 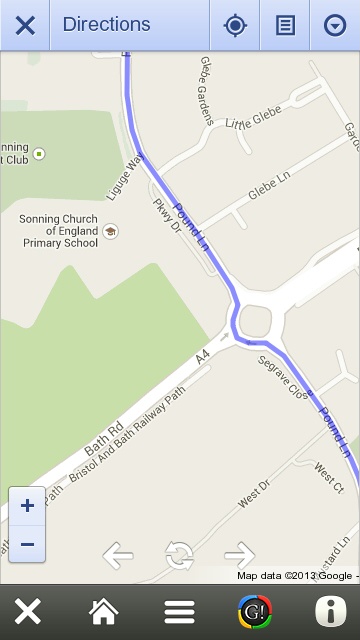 Although there's no attempt to be a real time navigator, it's a cinch to get directions from your current location to anywhere else and you can switch between textual directions (left) and an overlaid best route on the interactive map (right). 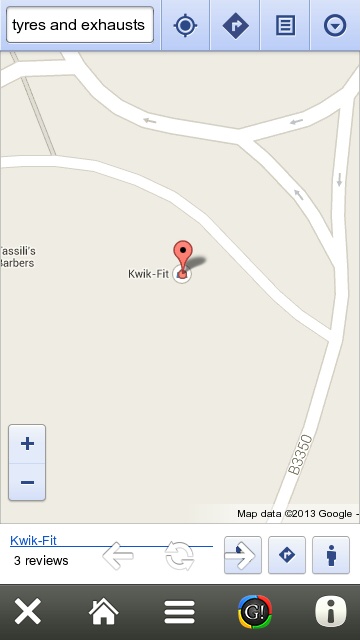 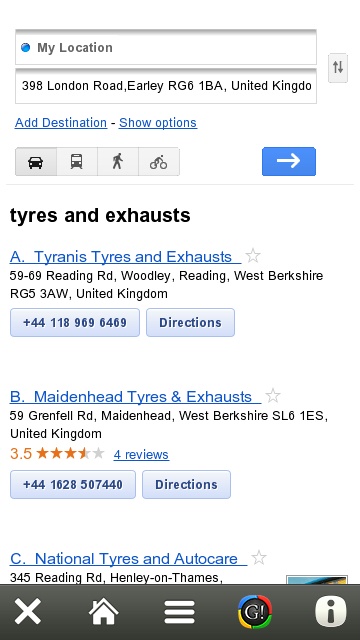 Google's database of places and businesses is legendary, certainly larger than Nokia's. Here I've searched for "tyres" and found a match nearby. You can then tap through for more details and directions.

At the bottom of the screen, note how the 'browser' controls get in the way of the HTML5 interface's buttons. This doesn't happen often in Google HD, but does occasionally make things trickier than they should be. 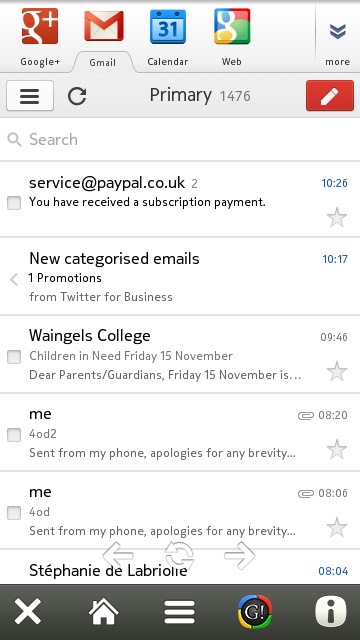 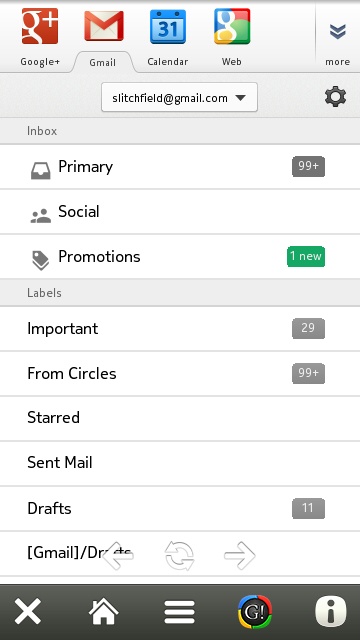 Into the Gmail interface, which is a step up from the usual feature phone UI. There are all the usual Gmail facilities, including filtering via the new 'Social' and 'Promotions' tabs. It's not that quick, but hey, it is Gmail on Symbian and fully featured, so no complaining, eh? 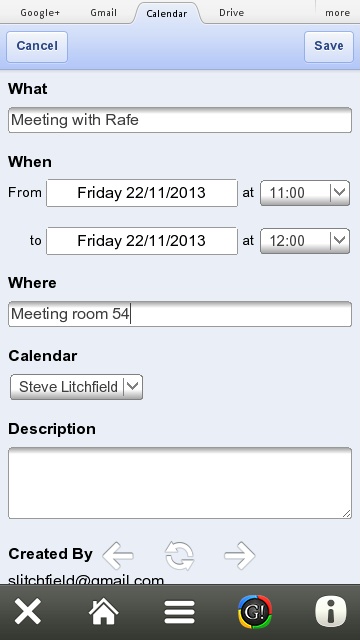 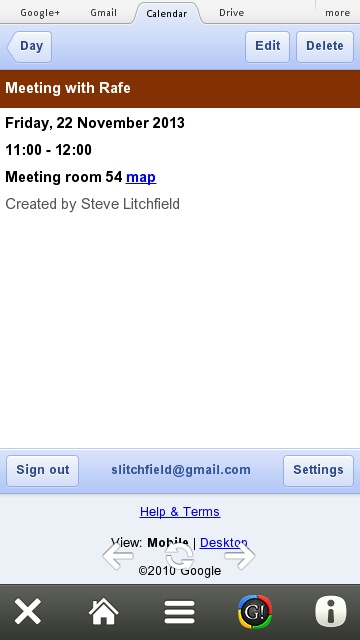 Also coming along for the ride in the Gmail section is Google Calendar, again welcome now that standard sync access to this has largely been withdrawn from Symbian. Here I'm creating a new appointment. 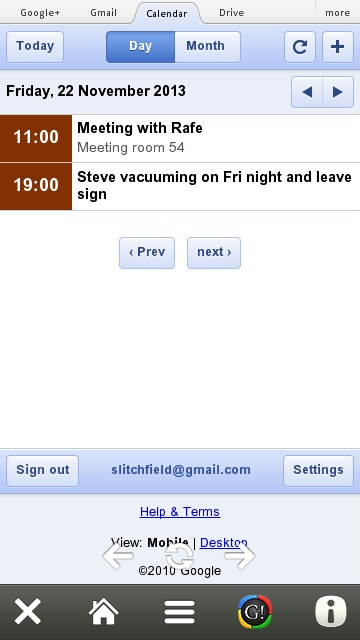 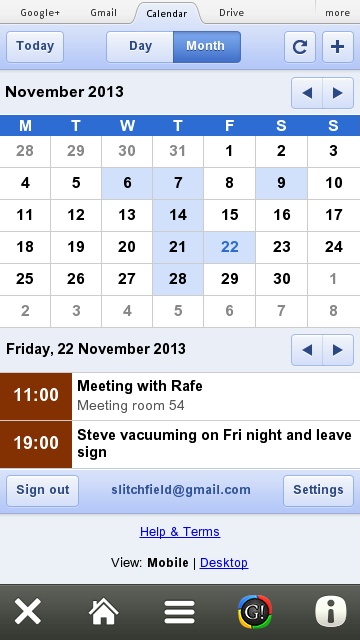 Showing off the rather nice Day and Month views in the Calendar module.... 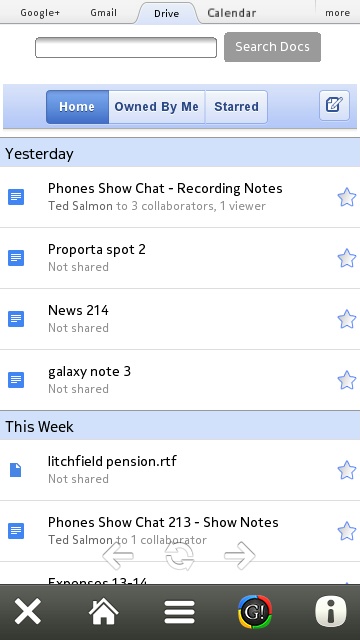 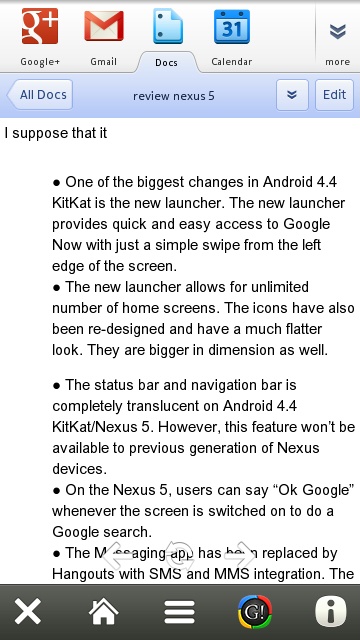 Again staying within the Gmail empire, Google Drive is also not off limits here, with documents coming in sensible fashion and there's even an 'Edit' button to press.... 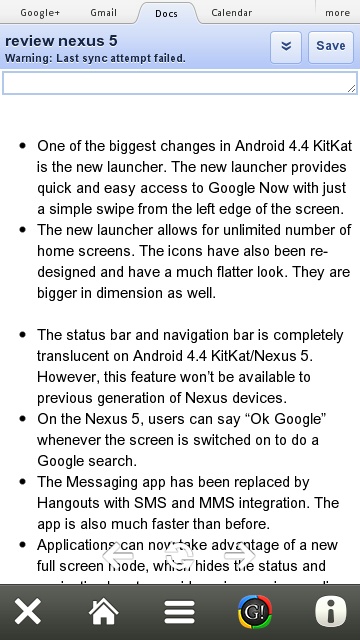 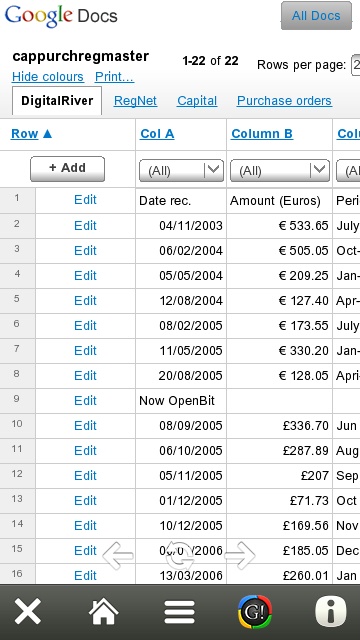 ...and, amazingly, editing works - you can change paragraph text and spreadsheet cell contents, with full auto-save (ignore the error message above-left), though be warned that the javascript-heavy web-based interface has a certain lag between tapping an editing control or field and something happening. Again, patience is required, but if you really need to tweak something in a Google Document then it can be done.

Note that there's no way to upload and download files to Google Drive though - you can't have everything! 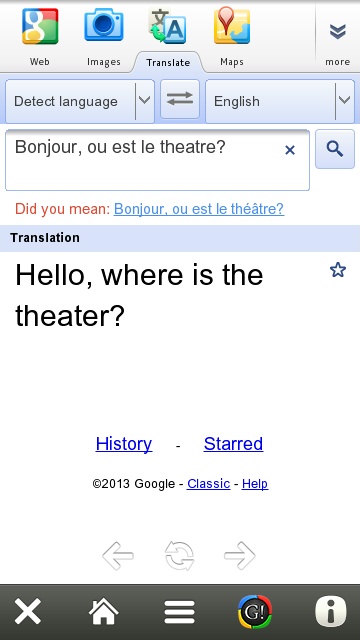 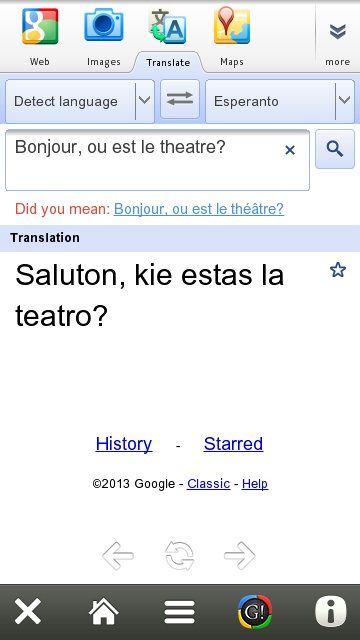 Google Translate works well, handling textual translations between half a dozen languages though, bizarrely, not the full list that you'd expect from Google. Still, the usual European options are here and work well enough... 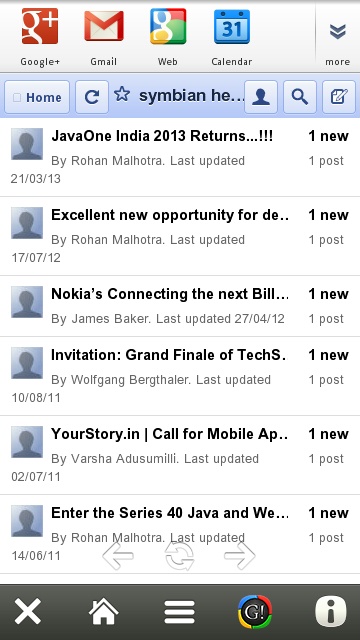 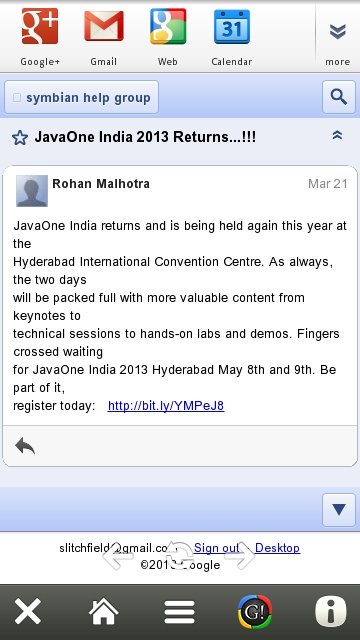 Google Groups isn't something many people use these days, but they're here and easily accessed if needed.

Now, since the interface being seen is all generated on the fly by Google's servers for iPhones (etc.), changes can be made by Google in the future and everything just appears here as usual. But I can't but worry about the long term - what happens after January 1st and Nokia Store applications get 'frozen'? Hopefully the developer can sort out an alternative download site (and payment option), since there are bound to be some small tweaks needed here and there.

"Workable" perhaps best describes Google HD Browser - hardly a ringing endorsement in a 2013 world of slick, zero lag interfaces, but when the alternative is, in this case, "not working at all" then I'm welcoming this solution with open arms. Recommended.

You can buy Google HD Browser here in the Nokia Store for £1 or local equivalent.

Comments welcome if you've given this a try, too.