A few weeks ago I reviewed Mugen's 3000mAh Extended Battery for the Nokia 808 PureView - the obvious downside of this is that it comes with an extended back cover too, making the 808 rather thick. Which is why I'm now also reviewing the sister product, the 1500mAh Slim Extended Battery, slotting into exactly the same volume as the Nokia supplied original. 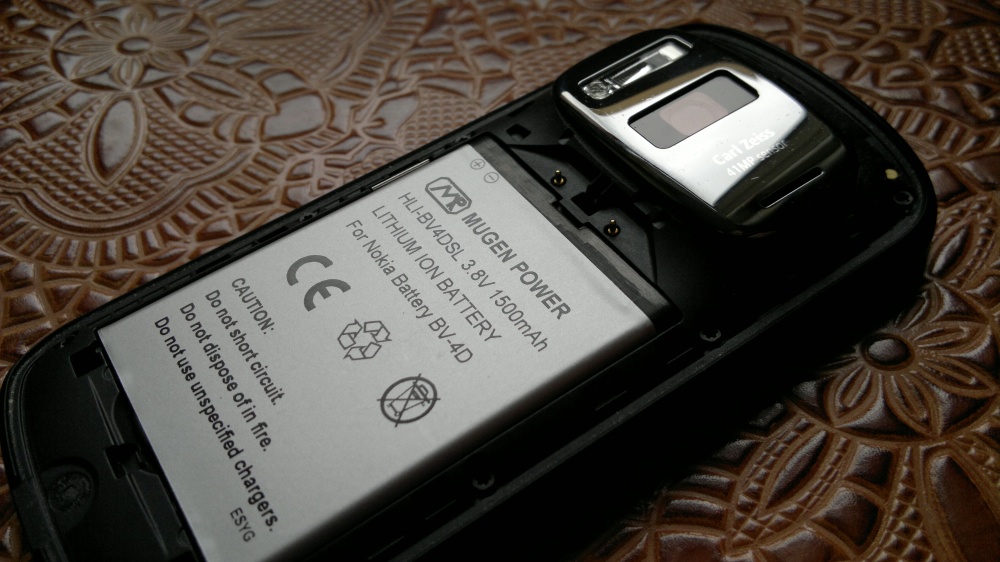 Now, the assumption when you look at a manufacturer-supplied battery is that they have tried to squeeze in as much charge as possible, but technology moves on and we saw a year or so ago that Nokia, for one, has started upgrading its batteries in terms of capacity. Thus here we have what is the form factor of the old BL-4D used in the Nokia N97 mini and N8 (among others), when it was rated at 1200mAh. We then saw Nokia upgrade the form factor with the BV-4D for the 808 PureView, sometimes found in a 1400mAh variant, more more commonly as 1320mAh (depending on the test results at the factory making them, one assumes). 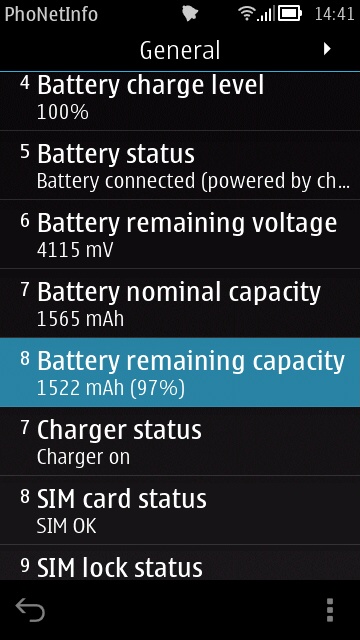 And now, in exactly the same volume, we have a claimed 1500mAh, and at the upgraded nominal voltage of 3.8V. To put this into perspective, that's a potential 30% net increase in usable capacity, all without increasing the battery size at all. And the same capacity at a higher nominal voltage than Nokia's 'hero' BP-4L battery that went into so many products.

There is, of course, a flourishing market in 'fake' batteries on eBay and even Amazon. You know the sort of thing (e.g. "2000mAh BL-4D Gold" here for £5.99) - the claim is often outrageous in terms of physics and is backed up by an unrealistically cheap price. Or, often, the battery looks authentic in the photo but is priced at £2.49 or similar. And, in either case, the battery chemistry is dodgy, the real world capacity is nothing like what is claimed and there's even the risk of the fake catching fire when being charged or otherwise damaging your phone.

Mugen Power are different, though, as you can tell from the prices. This "1500mAh Slim Extended" battery is almost £30, plus postage. You're paying for their design, for quality control, for their testing, and so on, and the price feels about right for something that's got to be the dependable heart of your smartphone.

In situ, the 1500mAh cell fitted perfectly once I'd done my usual trick with Mugen cells of gently prising open the sprung contacts a little more with a small screwdriver. I guess the company is taking no chances with a cell being too loose on a phone's battery pins.

When charging, the cell reported a 'nominal capacity' of 1565mAh - this is the capacity the battery was rated at in the factory, so in fact, we've got an extra 65mAh as well - in theory. In practice, the first charge stopped at 1522mAh, but I was still very happy with this - it was still over the figure reported on the label/specs.

Using the "1500mAh Slim Extended" for the next 24 hours proved uneventful - which is good. Battery charge seemed to hold up well and I plotted some reported data points about its discharge cycle, shown below. 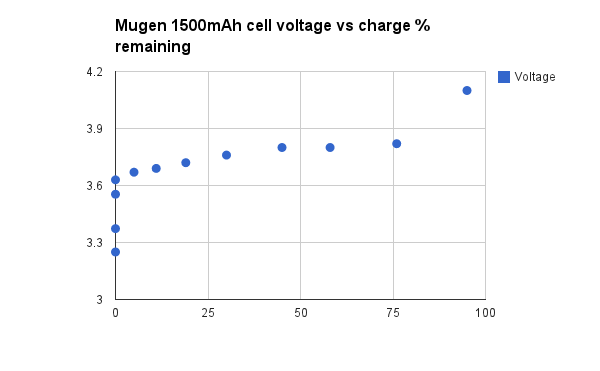 However, Symbian OS didn't pop up the 'Activate power saving?' prompt (I said "No"!) until the reported capacity of the Mugen cell was down to 5mAh, 0%(!), and the 808 then kept on going.... and going.... In fact, the reported figures stayed the same while the 808 kept on playing videos at full brightness and volume for another 40 minutes, while the battery voltage gradually crept down, with the 808 finally turning off at 3.25V.

Good stuff, even if you can't rely on current utilities (like Phonetinfo) to completely tell the truth about what's left, it seems - ignore the misleading vertical drop at the left edge of the chart above!

It's worth noting that after such an extreme 'testing to exhaustion' trial, the cell wouldn't charge in the phone - I had to resort to using a standalone battery charger to kick start it again. Mind you, in real life use, you'd take note of the 'Power saving' prompt, you'd say 'Yes' and you'd also head for a charger fairly soon after.

The bottom line is that your Nokia 808 just got itself potentially even better battery life, and by a not inconsiderable margin. So, more photos, more music, more social, more everything? Could this be the new 'hero' battery in the Symbian world?

Maybe. This paragraph is being written a week after the initial charge, so the Mugen cell has had five more, each over more or less the full discharge curve. Although Phonetinfo could be confused (again), and although battery life has seemed fine, the 'nominal capacity' being reported has stabilised around about '1100mAh'. So either the number's wrong, or I damaged the battery with my initial 'run til it dies' test, or the Mugen battery's real world capacity is less than quoted on the label. As with all such battery memoirs, I think we need more data points all round!

This battery's product page is here, on the Mugen Power web site.