If FixTheNet's screens (below) look familiar, that's because the game is a port of QtNetWalk, itself a version of the NetWalk arcade puzzler 'for system administrators' (available in numerous forms, including here for playing in a desktop browser). Think Pipemania but for geeks. And the result is a mind mangling success, now brought to Symbian for the first time, with level after level in which your task is to rotate ethernet junctions and terminals in order to 'light up' every screen. OK, ok, so noone in this scenario has heard of Wi-fi, but go with the concept for the game itself is not only tremendous fun but also completely free 'for a limited time' - so best grab it now, just in case!

There are four skill levels available here, each gradually increasing the grid size and, in the highest level, also allowing 'wrap around' connections from each edge of the grid, making the network even harder to visualise.

The gameplay mechanic here is to tap on a tile to rotate its ethernet connections by 90 degrees clockwise - the idea then being to line up all the ethernet wires so that the central server can provide a connection to all the terminals. Sounds easy, but the levels are fiendishly designed and what seems to be the obvious cable routing is rarely the one used in the solution, meaning that you'll be tapping away trying different combinations and applying some very 'Minesweeper-ish' logic to work out what has to go where. 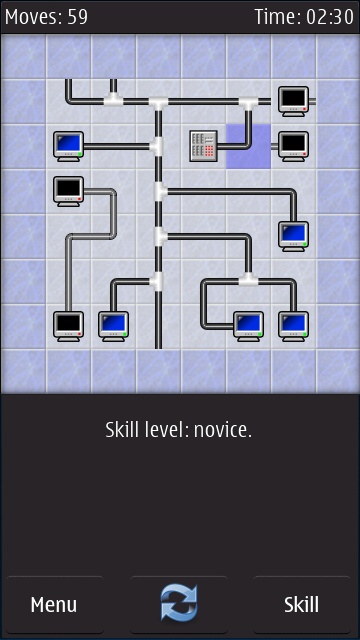 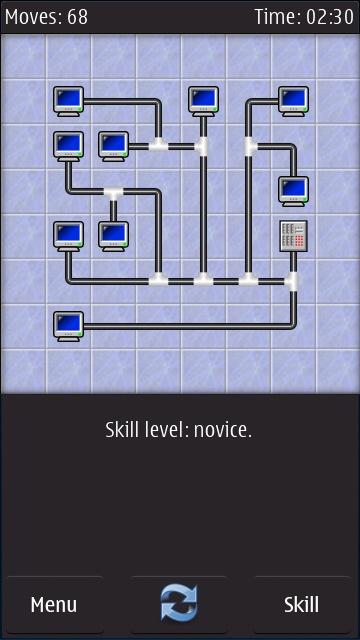 The interface away from the main grid is bare bones, but the levels are all here and the challenge remains intact. There's a timer running, though this seems somewhat academic and is, I suspect, just for your interest in case you wanted to record your own personal best times. The main metric to carry through to the built-in 'High scores' list is the number of taps needed, with a lower score obviously being better. 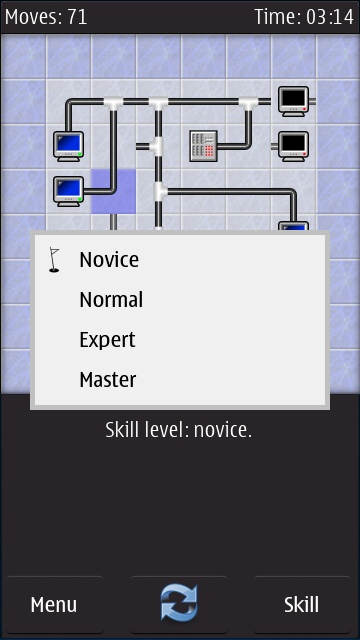 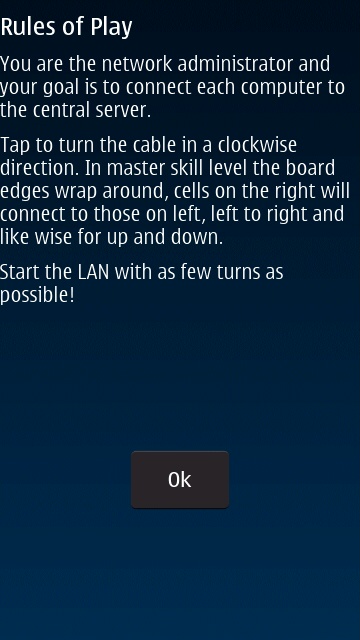 The core of FixTheNet's gameplay is the notion that every junction, every terminal is only ever one square away from all the adjacent junctions and terminals, and so what looks like an obvious pairing turns out to be a complete red herring because of course that terminal was supposed to be connected to an ethernet cable coming in from the other side (in the real world, round the back of the coffee machine?). So you'll make an assumption and proceed with that until, ten moves down the line, you'll find a terminal that can't now be connected and you'll have to retrace your logic, discard your assumption and try another theory.

Fun stuff - if you love the classic Minesweeper puzzle, then this is along the same lines but harder.

The developer states in the Store description that this is 'free for a limited time' only - and as freeware this comes highly recommended. Given the game's core is all open source, I do think it would be cheeky of the developer to start charging for it - maybe he should acknowledge the game's origins and simply ask for donations instead? But yes, either way, best download it now anyway and save FixTheNet for the next boring train journey or plane ride.