With pervasive Internet something that we've all become accustomed to, i.e. every device having access to the Internet, it's not surprising that Wi-fi tethering has seen a resurgence in interest. One of the first solutions to allow laptops (etc.) access to your phone's mobile Internet over wi-fi was that from Joiku (see our review in early 2008, and as covered in my interview) and, four years later, the solution is still as relevant as ever - in fact, it's had a major facelift, making it a clear candidate for a full review here.

But a little set up is needed first. The premise is that your smartphone has a working mobile Internet connection - in areas of good signal, 3.5G and with speeds significantly greater than 1Mbps. You might also have a laptop computer and perhaps a tablet (e.g. an iPad). One option is to get a seperate mobile dongle for the laptop or to order the '3G' version of the tablet, but these both involve an extra data contract or expense. Wouldn't it be great if you could simply share the phone's data connection with the other devices?

That's where JoikuSpot Premium comes in, of course. At least, it does if you're talking about more than one extra device. Because if you have just a laptop then it's fairly easy to use either (the Windows-based) Ovi Suite's built-in Dial Up Networking support or Bluetooth DUN on either Windows or Mac OS X to 'tether' the laptop to the smartphone's connection for free. But if you just have a Wi-fi tablet like the iPad or, more tellingly, if you have multiple devices - or perhaps are with a friend who'd also like to share the Internet connection on his or her tablet or laptop, then you're in need of a more flexible solution.

Third party accessories like the 'Mi-fi' are popular, but they're essentially mimicking what your Symbian smartphone can already do, just as well. The only slight catch is that JoikuSpot Premium, which enables the magic to happen, is a commercial application (between £4 and £8, depending on where you try to buy it), but it's still a lot, lot cheaper than a Mi-fi, especially when you think that you've only got to maintain the one phone contract or tariff.

NB. There's also JoikuSpot Light, a free version, which you can use to check that it does what it claims to do. It's fully working for simple, open web access by multiple devices, but if you want encryption (of which more below) and other Internet access, such as email, FTP, IM, etc. then you need the full JoikuSpot Premium. 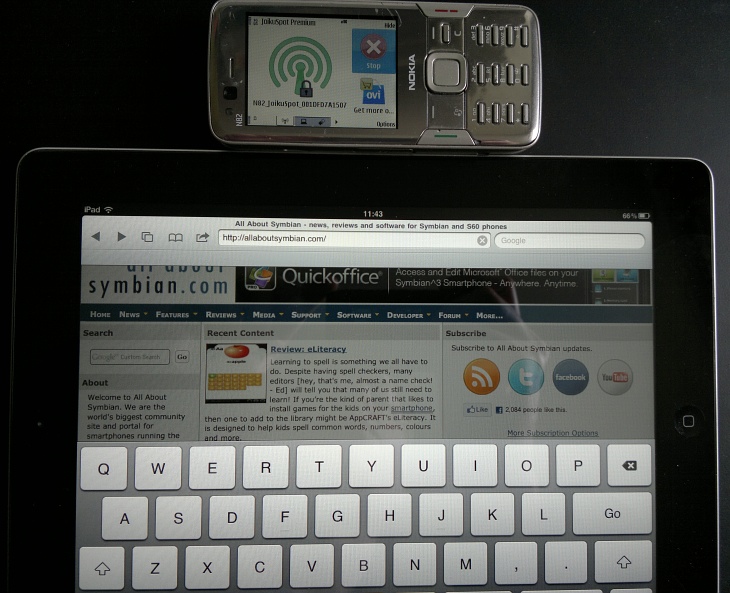 With all this in mind, I installed the latest build of JoikuSpot Premium onto the trusty (but ancient) editorial Nokia N82 - proving yet again how even older smartphones can have life beyond what you might think possible. Set up is fairly straightforward - a restart of the phone is needed after installation, but then for such a low level utility this is fair enough. 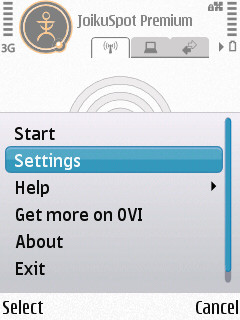 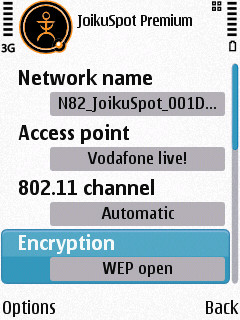 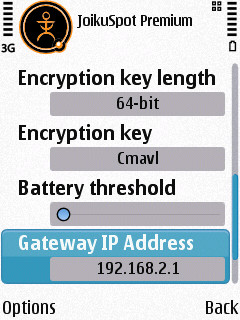 There's a single setup dialog, the 'Network name' is chosen for you but you can rename it if you like, for privacy reasons in a public place. You can set the Wi-fi channel to use if you know that a particular channel is in use nearby and that there'll be a conflict, but this is probably best left on automatic.

Encryption is an important topic to talk about here - by default, this is turned off, for simplicity's sake, but if you're mobile then I'd strongly urge you to turn on encryption, both to stop others 'leeching' off your connection (slowing you down and possibly raising your data bill) and to stop possible spying on your Internet activities (e.g. stealing Facebook and banking logins).

JoikuSpot Premium only offers WEP encryption rather than the much stronger WPA2, possibly because the latter would be impractical to implement in software but mainly because of a technical reason to do with the Wi-fi modes offered by Symbian OS. It's true that WEP-encryption is crackable if there's enough data to capture, but we're talking about a temporary hotspot that you've set up and about which a potential attacked would have no prior notice. So, for you to be attacked, a miscreant would have to be very close (within 10 metres or so, probably within eye sight), would have to have significant hacking/tech knowledge and you'd have to be pushing a fair amount of data through the temporary hotspot. Nothing to be too fearful about then, but it would be good to see WPA2 added to JoikuSpot Premium and Symbian at some point, to prevent even this worry. And WEP is still a couple of order of magnitude safer than not using any encryption at all.

There's a choice of key lengths (5 characters or 10 characters, effectively) - in theory the latter is more secure, but it's marginal in practice. Plus your smartphone is given a gateway IP address, though I tried to login to this and failed, so perhaps it's not meant for manual tinkering or perusal.

When done, you simply highlight 'Start' and watch. (Note that it's important that your phone's Wi-fi stack isn't already in use by another application. So, if you're testing this at home make sure to disconnect any relevant applications.) After a few seconds, the hotspot icon turns green, along with a padlock symbol, indicating that it's an encrypted network. 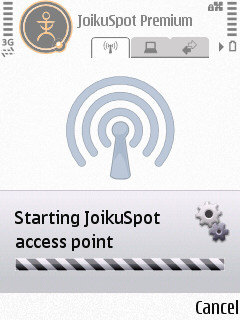 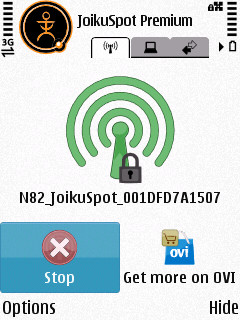 Once started, you can fire up Wi-fi scanning on any Internet-demanding device and you'll see the new hotspot and can join the ad-hoc network in the usual way. One thing that caught me out at first was that S60's text input system automatically capitalised my chosen WEP password and it turns out, not surprisingly, that these are case sensitive. So you have to match capitalisation when entering the password on other devices. 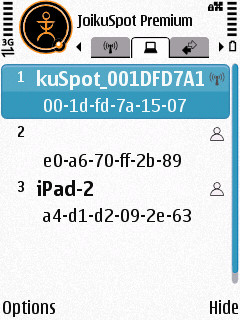 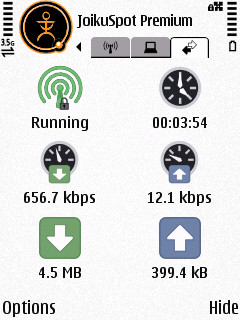 As shown at the top, I tested JoikuSpot Premium primarily with an Apple iPad 2, though I also had an N8 and a Windows laptop also connected all at the same time and using data simultaneously. There are other displays on offer here, one showing the currently connected devices (though, curiously, the N8 doesn't get named explicitly on the second row) and one showing the relevant usage statistics - handy if you're watching out for overall data used or just if you wonder what sort of speed you're getting over your 3G network.

Although there will be some degree of bottlenecking with trying to hook up multiple devices through a single phone's data connection, it's also surprising how much 'dead space' there is in a typical browsing or email connection, i.e. three people might be able to connect to the 'net through JoikuSpot Premium and the overall speed speed might not be that different from that when using the system on their own. It all depends what each person is trying to do - and, obviously, on the raw bandwidth available.

The only two gotchas I encountered were the 'W-Lan use' conflict and the password capitalisation, both mentioned above. As you might expect though, there are more things which might catch others out, so I was pleased to see good support from the JoikuSpot developer end, including this handy JoikuSpot setup and troubleshooting guide (PDF).

As one of the original Symbian applications from the early days of Wi-fi in Symbian, JoikuSpot is admirably mature now and I installed it on two smartphones without issue. While the phone's data connection is active in JoikuSpot Premium, it can still be used by the phone's own applications, adding another connection vector. So, for example, you might be using your smartphone while offering its connection to share with a couple of your friends.

All of this comes with a big battery hit, as you might imagine (you can tell from the way the phone gets warm!), with simultaneous (and heavy) processor and radio transmission duties. If you're mobile with JoikuSpot Premium for any length of time then you'll almost certainly want to plug-in, either to a train's mains outlet or (more likely) through a portable charger like the Proporta Turbocharger range.

With the ever-increasing popularity of netbooks and tablets, there's more argument than ever before for basing your mobile IT use on a two-box solution, with a relatively small (but capable of 'heavy lifting') Symbian-based smartphone running this application and a large-screened device for all the heavy/flashy user interface requirements. JoikuSpot Premium worked fine for me on the iPad 2 using email, App Store, online gaming and more, in addition to the obvious web browsing.

Forget the price of JoikuSpot Premium, it's insignificant in comparison to your other mobile data costs even across a single year. Recommended for anyone who is happy to share their Symbian smartphone data connection and has a tariff to match!