Proporta's range of mobile charger/battery packs has been perennially popular, every single winner on my Phones Show accessory giveaways has so far chosen the Proporta accessory. And with good reason. This, the latest in the line, is bigger and better in every way, with a whopping 5000mAh of charge ready to be transferred into any smartphones of your choice while out and about. Here's my illustrated review of the USB TurboCharger 5000.

The idea, if you'll recall, from my previous reviews of (for example) the miniscule Proporta USB TurboCharger 1200 - the number accurately reflects the number of milliAmp hours of charge that can be stored internally (at typical charging voltages), but do note that there's always an inefficiency in the transfer process from charger to phone.

On this one-to-one basis, it's actually harder to justify buying a mobile charger, since it's a lot more space efficient and somewhat cheaper to simply get a spare battery (even if this alternate solution is ultimately less flexible). However, crank up the number of milliAmp hours high enough - to the point where, at an event, you can (through the day) deliver full charges to two Nokia smartphones, a digital camera and even top up your Apple iPad, all without breaking sweat - and you've got a different, altogether more usable beast. 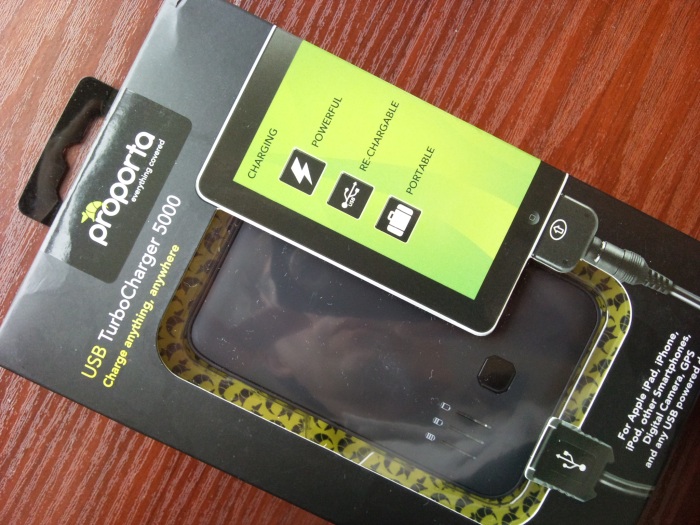 And beast this is. It's black, it's big (well, slightly bigger than the 3400mAh version, obviously) and it's bulletproof. I didn't actually fire bullets at it, but it appears to be made of rubberised metal and probably the most solid mobile accessory I've ever seen.

Aside from the 5000mAh of charge, the TurboCharger 5000 distinguishes itself by offering not one but two USB output ports. The idea here is to be able to charge two devices at the same time (e.g. a phone and a camera), but there's also a difference in current capability - one of the ports is labelled 'HIGH' and this can supply the full 1A charging current required by the new generation of tablets, notably the Apple iPad.

There's an 'on/off' button on the top and three strips of blue LEDs to give a rough indication of both charging status (when putting charge in) and charge left status (when charging other devices). Finally, there's a miniUSB input port, for stocking the TurboCharger 5000 up using a cable from your PC or Mac, for example (though Proporta also do a 'world pack' and various other accessories, enabling you to charge directly from a wallplug or car 12V socket).

In terms of capacity, the 5000mAh charge equates to just over 4000mAh of charge (transferred at 5V) on your devices. It's still a heck of a lot though - think of taking an empty Nokia N97 mini, an empty Samsung i8910 and an empty Sony Ericsson Vivaz and recharging all three right to the brim. In the middle of nowhere, quite impressive. 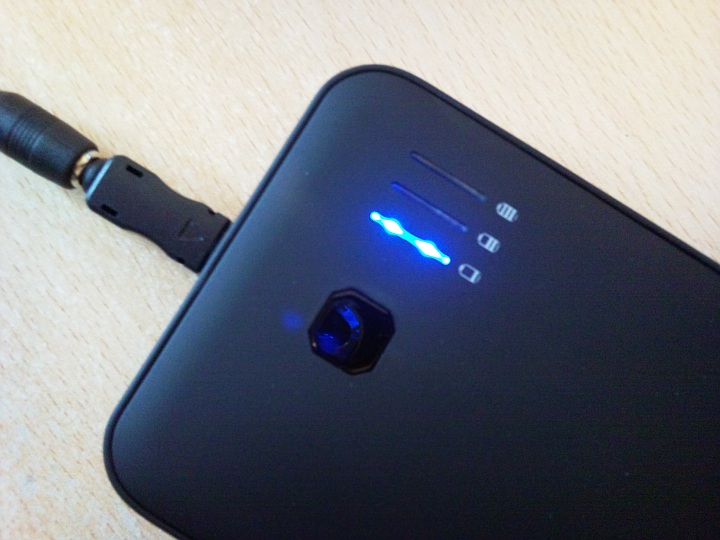 There are some caveats and issues, of course - this is me, and I don't do glowing reviews for marketing purposes. Good though, the TurboCharger 5000 is, it's not perfect. For starters, there's no timeout, as on previous TurboChargers, so the device stays 'on' (and presumably leaking some charge, if only with the LEDs lit) even after you take out the cables - you have to press the on/off button to manually turn it off. Which is OK, except that this button is also too easy to hit by accident, even picking the charger up or having it knock against something in your briefcase is enough, unfortunately. 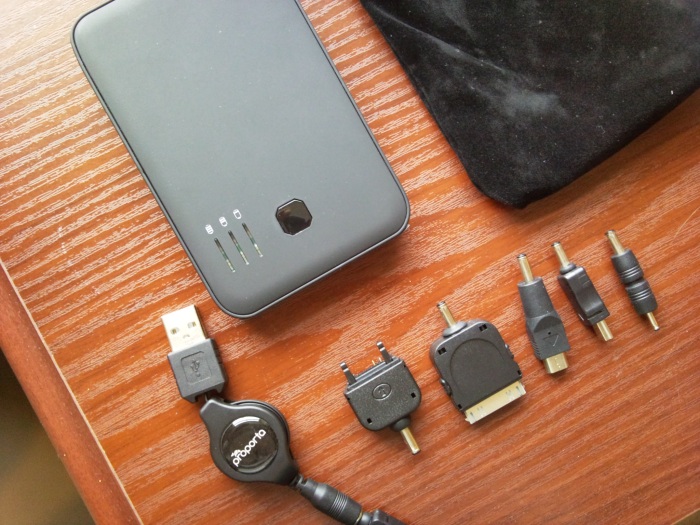 Shown with the cable, tips and drawstring bag that come in the box...

Secondly, the retractable cable supplied (USB to female generic, with a bundle of device-specific tips - microUSB, miniUSB, Apple iPod, Sony Ericsson, Nintendo DS Lite, Nokia 2mm) is quite thin and, I suspect, limits the current that can be handled. This isn't a problem for phones and cameras, but the 1A charging current needed by the likes of the iPad is too much for it and the dreaded 'not charging' appears on the iPad display. Using an official (white, thick) Apple USB to iPod charging cable solves the problem and charging then works fine - but this is something Proporta should at least note on their web site, in terms of what you'll need to take in your 'travel kit'.

Thirdly, as with battery indicators on almost everything, it seems, the three bar system here isn't strictly linear. Having charged up two phones from scratch, all three bars were still lit. Charge a third phone and it was down to two bars. Plug in a third and the charge was all used up in ten minutes flat. Not exactly a showstopping problem, but don't be lulled into a false sense of security by seeing 'two lit bars' on the charger.

Finally, Proporta didn't actually design this hardware. Yes, it's branded with their name, yes, it's their cable and tips in the box and all the packaging is Proporta's, but the exact same unit has been out for a while in the Far East and you may come across it for less money somewhere else on the Internet. Having said that, I do think it represents good value for money, in terms of what it can do, and Proporta are such a friendly (British) company that it's something of a pleasure to be one of their customers, to get proper warranty and support, and so on. 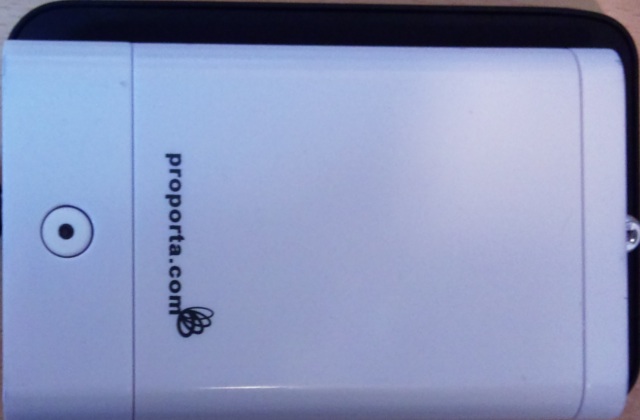 Aligned by their bottom-left corners, the TurboCharger 5000 is slightly larger and with more rounded corners, compared to the older 3400mAh version.

The TurboCharger 3400 has been part of my kit for events and days out for the last two years, but it just got bumped. This is a direct replacement, isn't massively larger, has around 30% more capacity, can charge heavy current devices and can even charge two gadgets at once. As such, it comes recommended for any fellow road warriors.