You've got to love lateral thinking when it comes to using smartphone hardware. In this case using the auto-focus optics in the Nokia N8 (and selected S60 5th Edition smartphones) to turn your smartphone into an intelligent magnifying glass. In use, it works surprisingly well and more than justifies its existence as a separate application. Read on for my review.

A smartphone as a magnifying glass? Here's the use case. You have normal eyesight and are handed medication - and you can't read the tiny print on the bottle's back (e.g. see below). Or perhaps your eyesight isn't that good to start with and you want to read a magazine article in a small font or against a really ghastly background (publishers, you know who you are...) In each case, you need greater clarity, you need to get closer - and larger. 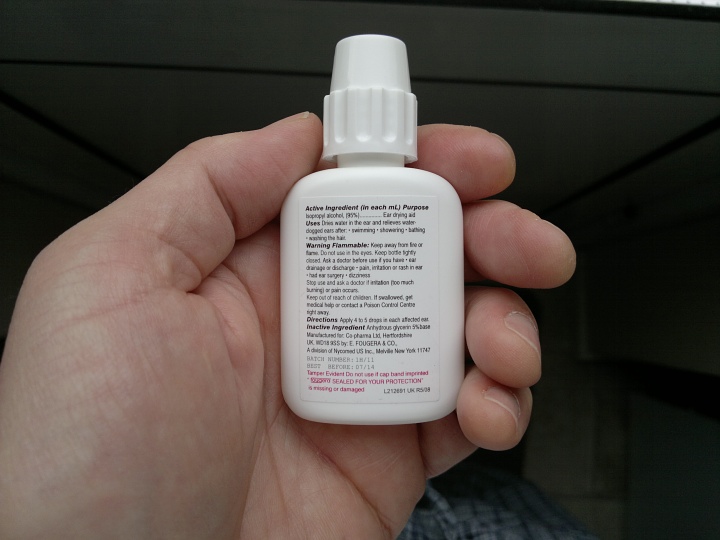 A common scenario - squinting at tiny print on a bottle or canister...

Which is where Magnify comes in on the N8 - or any S60 5th Edition phones that can run Qt (so that's the N97 out then....!). The one big requirement, as you might imagine, is that the device has an auto-focus camera (as opposed to fixed focus, as on the 5230, or EDoF, as on most of the other Symbian^3 and Anna devices). The N8 is the big target device here, with perhaps the many with 5800s, N97 minis and X6s in the mix as well.

Essentially, you start Magnify and (in v1.0.3 at least) it focusses and you're looking at hugely magnified text. Very easy. The built-in Camera application is limited in its degree of digital zoom (to stop users zooming in too far without realising the degree of 'damage' they're doing to their image), but here raw quality is less relevant than absolute zoom magnitude. With judicious taps on the '+' icon and an extra yap or two on the screen, you can magnify your chosen subject rather splendidly: 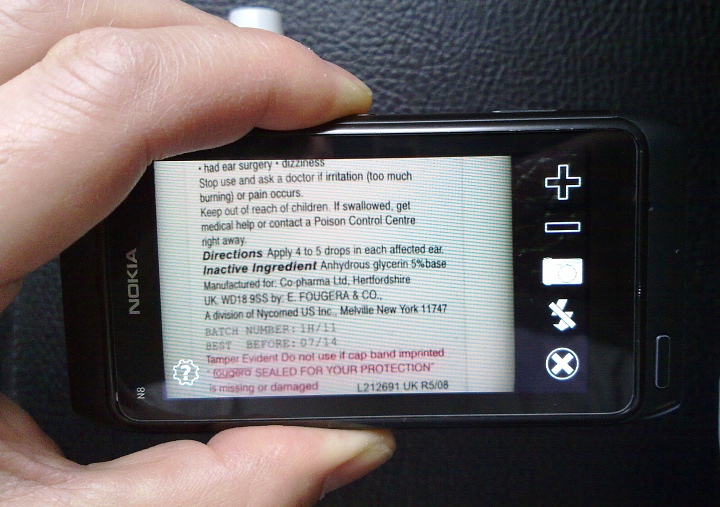 The toolbar also has a Camera icon, for capturing what's being shown - very useful, for later reference - images get saved into a separate 'Magnify' folder in 'Images' on your chosen disk drive, and at the resolution you choose: 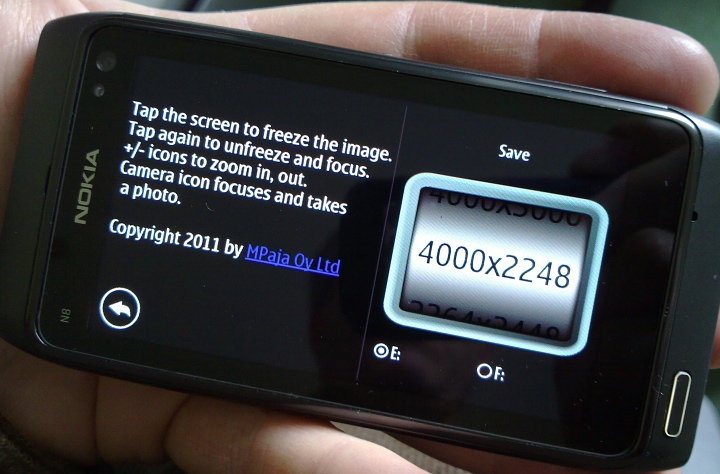 Here's a typical captured image, from the medicine bottle above, click through to enlarge or download, to see the raw quality: 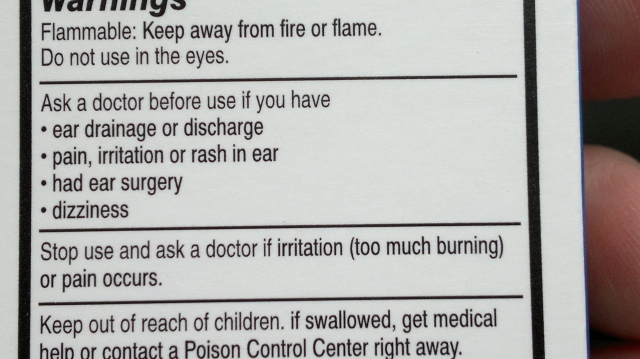 To give you an idea of the magnification ability, here's a book thumbnail from a magazine page - the small print was way beyond what my naked eyes could pick out, but Magnify came up trumps, even though I'm still not sure what the second word on the second line says [later: apparently it's 'Quirk'!] 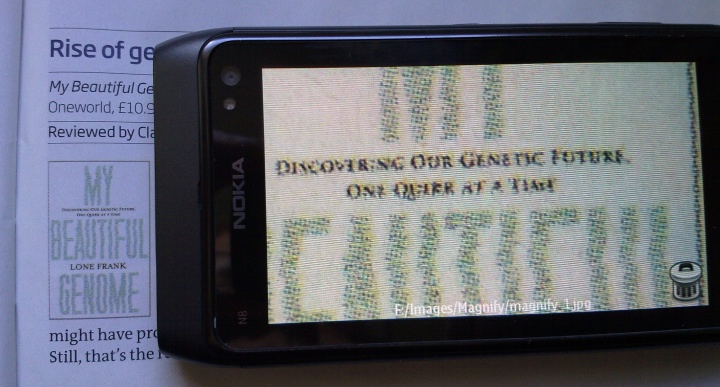 The 'freezing' function, where you tap the screen to temporarily stop the action is useful in that you can line up the magnification, focus, freeze the action and then bring the phone up to your eyes for closer study, if necessary. Once you get the hang of juggling the focussing action and '+' and '-' icons, the utility's really very good and can bring up even the smallest print in far larger form.

Magnify takes around five seconds to start and be ready for action, being written in Qt, but given the need to power up the camera electronics, even the native Symbian CameraPro N8 is only a second or so faster. Incidentally, CameraPro N8 also allows high levels of digital zoom and can, in theory, produce similar effects and results to Magnify, but the latter is far more centred on its one core function and is much convenient to use for this particular task.

At £1.50, Magnify's within impulse purchase territory and I suggest would make a great little 'keep for when it's needed' utility for any N8, 5800, N97 mini or X6 users.

Steve Litchfield, All About Symbian, 5 September 2011