In one of those "why the heck haven't we reviewed this before?" moments, I look at Nokia's really rather spectacularly useful DC-11 universal charger. Talk about hiding its light under a bushel, the DC-11 has several rather unique benefits - though if you want to avail yourself of one you might have to shop around, since at full RRP it's on the expensive side!

Now, rechargeable batteries for topping up phones 'on the go' have been around for ages, of course. You'll remember my dalliances with the Proporta chargers, for example? The DC-11, at a 'mere' 1500mAh, is one of the smallest capacity mobile chargers I've tested, but it does have two unique selling points.

Firstly, it's custom designed for the voltages and currents expected by modern Symbian smartphones. If, like me, you've tried charging a Nokia N86 or N97 or E7 (and other micro-USB devices) using a Proporta or similar unit, you'll know how frustrating it can be to finally achieve that elusive 'Charging' prompt and beep.... The DC-11, as you'd expect, has been designed with Nokia's somewhat fussy charging electronics in mind from the outset. It just works. In fact, it works so well that you can charge two devices at once, i.e one via the integral 2mm pin and another via the integral microUSB jack.

Secondly, the DC-11 can go one step better. Even while charging up to two smartphones, you can plug the unit itself in, so that it charges and passes on mains charge through to the two connected devices. That's a neat trick and means that you can leave the DC-11 plugged in most of the time, as your universal charging accessory on your desk. And then, when you head off on a trip, you unplug it, safe in the knowledge that it's charged to 100%. Good design and very, very handy. 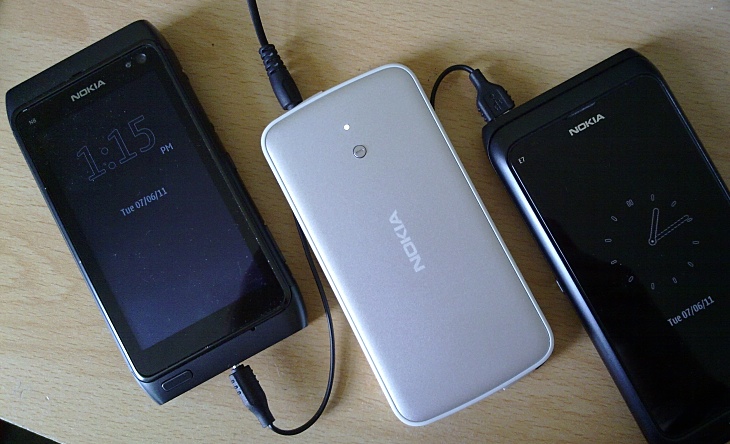 To start charging, you simply hook up and press the power button on the top. When not in use, each of the flying leads is rested inside the hollow side edges of the DC-11, with the connectors themselves plugging into plastic dummy sockets in the unit's two ends. It's a lovely bit of hardware design and helps keep things very neat. If your Symbian (and other OS) smartphones are a mix of 2mm and microUSB then this one unit with integral wires will be all you need, with no fiddly adapters to lose in your briefcase or rucksack.

The perfect accessory? Well, almost. There are a number of caveats that spoil what might otherwise have been a 90%+ score:

Overall, though, the DC-11, despite its moderate capacity, just became my new favourite mobile battery/charger. It charges all my Nokia phones of the last few years, without a single 'Not charging' error. Result!

Steve Litchfield, All About Symbian, 7 June 2011