Nokia's latest handset in the lower ends of the market, the C5-03, comes with smart styling, lots of plastic and a price tag to match. Running Symbian^1 (the OS formerly known as S60 5th Edition), it appears to be Nokia's entry level touchscreen device for 2011. It's likely to be a popular handset on Pay as you Go and low priced monthly contracts, so let's have a closer look at it.

Where to place the Nokia C5-03? Let's start with the facts. It's an S60 5th Edition device, and it's a “pure” touchscreen device based around a 3.2 inch resistive screen. No slide out keyboards or fancy controls, just the regular Nokia buttons around the side and at the base of the device (call, home, volume, keylock). It's got a 5 megapixel EDoF camera, and comes with A-GPS, Wifi and 3G connectivity. The retail box we reviewed also has a 2GB microSD card in the bundle.

All told, you could label it as a slightly cut-down 5800 for 2011, or an up-gunned Nokia 5230 that's going to be a popular choice as a “free smartphone” on a monthly contract. With an unlocked price of around 170 Euros, this is a handset and chassis combination that I'm expecting to see customised into various special editions for each network, much as the 5230 was leveraged. 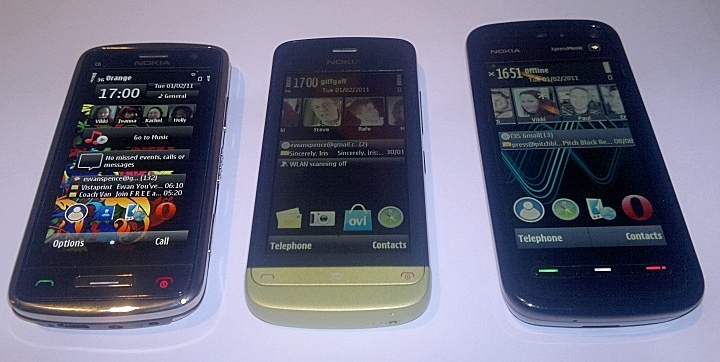 It's also the sort of phone that those smartphone owners paying £500 and more for their handsets look down on and say “that's not a smartphone, people don't buy that for features, they're just trading on the Nokia name.” This constant need to define a high end to the marketplace passes over the fact that Nokia have done what they (and Symbian) were always going to do, which is push the OS down from the high end, into the medium and low end to capture the volume and use those numbers as a basis for the ecosystem.

Devices like the C5-03 are the tommies in the trenches of the smartphone – and it's facing down competition such as the ZTE Blade, running Android. Get this into the networks, bundled into monthly plans or attractive pay as you go deals, and you have a successful phone.

There's not much in the retail box. As this is a UK review unit, it retains the small profile of the Euro chargers, but with a “pop-up” earth pin for the standard 13 amp socket. Given that it also charges over USB, there's an argument that you don't need the charger, but that assumes the target audience all have a computer. Given the budget nature of this device, that's not a given, so in goes the charger. There's the smallest microUSB cable in the world, and a basic Nokia headset with stereo ear-buds, and a single button controller/microphone for hands free calling. This goes into a standard 3.5mm jack plug, which can also take your own headphones for listening to music, or any of the other Nokia hands free kits (including the legendary AD-54). 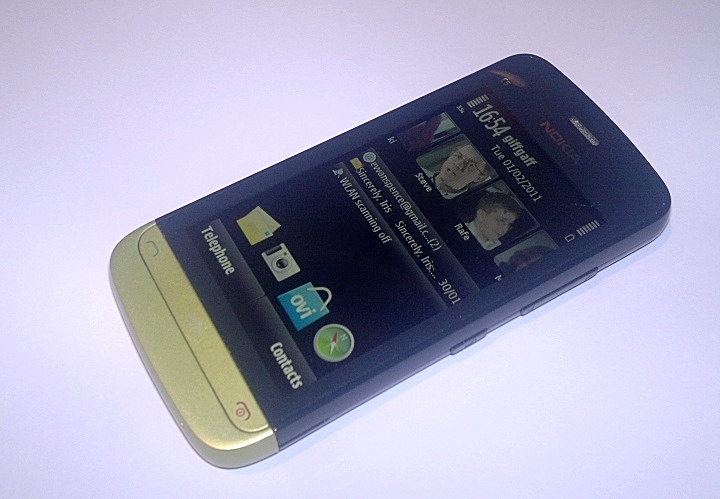 There is no getting away from the fact that the C5-03 has been built towards a specific price point, and certain compromises have to be made. There is no forward facing camera on the unit, so video calling is out if that's your thing. The camera to the rear is the cheerful Nokia 5 megapixel unit, with EDoF. There's no lens cover here, neither is there a flash or physical shutter button. It takes quick pictures, suitable perhaps for uploading to social networks, and that's about it (how times have changed, four years ago the pictures would have been stunning). I wouldn't bother with video, it's VGA only at fifteen frames per second, enough to capture a mood but in no way useful for heavy duty media creation.

The back cover is my biggest let down. Held in place by four clips, you'll need a very small coin or a flat head screwdriver to lever it up from the rear of the unit, releasing two clips, and then pull, squeeze and lift to release two more before it lifts off as one. It's almost a snap fit on, and there's no concession to people who constantly change SIM and memory cards. Once they're in, it feels like you are expected to leave them there for ever.

It also attracts fingerprints like the Bee Gees attract cheese.

Other omissions include the camera button itself. Once you open the camera app, you'll need to use the touchscreen to take your photo. Neither is there a proximity sensor on the front of the unit. When in a call, the screen will automatically lock to prevent any mis-types or actions. While not a huge deal in itself, it's small things like this that aren't noticed on the higher end Nokia units that then later, occasionally, make me go “ooh” when testing the lower priced devices. It's not a huge thing, it's just slightly different to the bigger phones, but it does mean it takes a moment longer to get to the Camera application if you need to take a picture in a hurry. 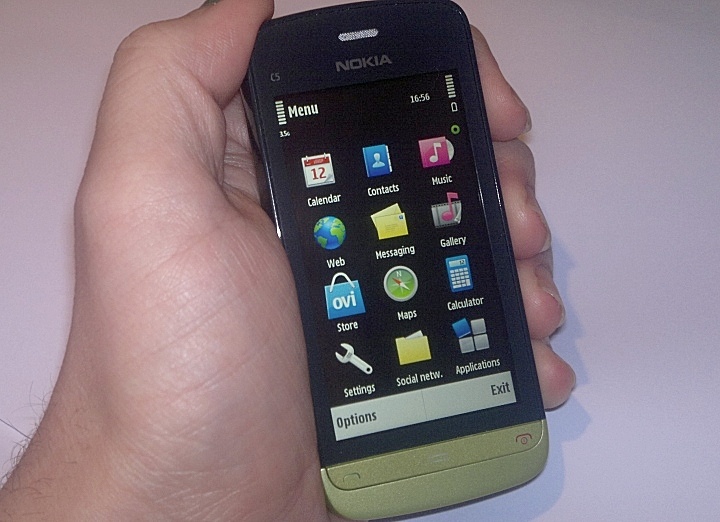 One change I do like is the keylock. Previous handsets have, as a rule, used a sliding key to lock and unlock the touchscreen of your phone. Not on the C5-03 - they've used a button. One press locks the screen, a second press brings up the unlock screen and a big friendly button on the display that says “Unlock”. Given this is a phone where the time is not always on display, this second press can also be used at night or in the dark to let you check the time, safe in the knowledge the phone will go back to 'screen off' and preserving your battery life.

Build quality is surprisingly high for a phone at this price. Gripping it in my hands, there are almost no creaky noises as I apply pressure to it. It feels solid, and in part due to the light weight (and low kinetic energy) I suspect it'll be pretty robust when it comes to drops, falls and other assorted impact damage. A phone like this is going to be in a hostile environment, with people not taking a huge amount of care over what is essentially a tool, and I'd expect the the shine on the back case to dull, maybe with the occasional scratch. The front screen, taking up most of the unit, is likely to get some punishment, but it feels similar to the screen material on the 5800 and 5230, and they stood up incredibly well over my months of use.

I've a slight concern that the styling has removed the lipped edge that the 5230 had – this lifted the screen just enough off a tabletop if placed face down, and provided a bit of designed protection. No doubt the test centre has put hundreds of these phones through destructive and non-destructive testing and it's fine, but...

Boy is the C5-03 light. Measuring it, it weighs in at a diminutive 93 grams, which is so light that I don't notice it at all in my pocket, and using it for long periods (such as reading my eBooks) the lack of weight made it comfortable to use. The curved styling and cool plastic at the back of the unit makes for a phone that feels like it belongs in the hand.

So what makes the C5-03 stand out? To be honest, someone watching the Symbian scene would say not much – but this isn't a phone for them. This is a phone to catch someone's eye in a shop for an almost snap purchase decision. That means the size of the screen, compared to the bezel, with just 4mm between the screen edge and the phone edge, makes this look to be a larger phone than the 5800. The main body of the phone comes in two different colours (black and white) and the bottom of the device has a splash colour strip – our review unit is black with lime green at the base, but black, white and blue are also options on the base. I'd expect networks to have their pick of colours to fit in with their research on users as well.

All these considerations aside, I'm impressed with the C5-03. In terms of specifications, look and feel, it's a modern smartphone, with most of what you would expect it to have. The weak point may be the camera, but I don't think people will be buying this for crystal clear shots for publication. I think it's fair to say that even though it's low specced for a Nokia device, it's still got the edge on comparable smartphones in this price range. It might not raise any banners, or make a big song and dance, but the C5-03 is a little gem in the low to mid range device category in terms of design, form and function.

In the next part of the review, I'll take a look at the two other planks of Nokia strategy (software and services) and see how those work on the C5-03.