As many people will know, the Apple iPhone 4S was announced last night, with one of the chief improvements being a better camera with better Back Side Illumination, wider aperture and an extra optical element. Leaving aside other elements of the iPhone 4S (which, interestingly, retained its 3.5" screen), such as the Siri voice control, I thought you might be interested in a comment or three on the 4S's camera, as it compares to some of Nokia's camera phone units.

Primarily, its crucial light-gathering ability, by far the biggest factor when considering how a smartphone camera performs when the light is less than optimal (i.e. not sunny!)

Using the table format from my original article:

Again, I've used some homegrown maths, calculating the sensor area of a number of comparable camera smartphones, allowing for the lens aperture size used (the 'F' number),  and then allowing an extra percent (as appropriate, using the original manufacturer claims) for the recent crop of devices with BSI (Back Side Illuminated sensors):

* original figure in this chart was wrong - this is the correct/amended figure!

Apple's keynote claim, that the Back Side Illumination means up to 70% more usable light reaching the CMOS sensor, is extravagant but possible. Essentially, BSI involves changing the position of the sensor's wiring so that no unwanted reflections or obstructions mar the photon detection. With BSI compensation, you can see that the iPhone 4S's camera could potentially produce better results in indifferent light than even the Galaxy S II - but it's still some way short of the raw light gathering potential of the two year old N86 and far short of the one year old N8. 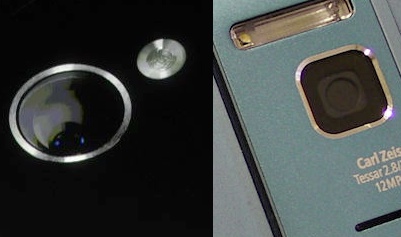 Add in the use of Carl Zeiss optics in the N8 and add in the Neutral Density filter (for handling bright sunny conditions and ensuring that too much light doesn't get through to the sensor), and the N8 stays even further in the lead.

Then add in the proper Xenon flash, almost unique these days to the Nokia N8, which takes care of indoor, low light situations (parties, events, meets, living rooms, clubs, etc) and, on the camera front at least, the N8 and iPhone 4S are still some way apart.

Just in case you were wondering!

You may also be puzzled that the N8 has a comparatively high 'F' number, meaning a smaller aperture, when compared to the newer Galaxy S II and iPhone 4S cameras. The latter two devices have deliberately larger apertures, again to try and capture more light to fall on their physically limited 1/3.2" sensors.

This is a valid approach, in general, in photography, but does have the disadvantage that there will generally be significantly less depth of field. Great for arty portraits and macro shots where you want everything blurred in the background, not so good for generic photos. Balancing F 'stops' and shutter speed has always been part of the art of traditional photography - it's no surprise to see different manufacturers tinkering with a different balance/formula in smartphone camera technology.

On the video/camcorder front, the iPhone 4S also introduced 1080p video capture with image stabilisation - good to see, though it should be pointed out that the quality difference (at this sensor size) between 720p capture and 1080p capture is marginal and that, contrary to some commentator comments during the Apple announcement, image stabilisation isn't something new. The Nokia N95 had this in 2007, as have most Nokia camera phones since, albeit based on frame processing rather than using accelerometer input explicitly.

The N8's video will still be better overall, for most people, because of the stereo digital sound and intelligent digital zoom, both features which are still, as far as I know, unique to the N8 (and N86).

Please note that this is not me 'having a go' at the new iPhone - which I see as a nice evolution on the existing iPhone 4. I just wanted to update my table and comparison comments in the light of the new smartphone announcement. The iPhone 4S has plenty of unique (mainly software) features of its own, of course - which are covered on plenty of other sites around the web.

Filed: Home > News > For those who were wondering about the Apple iPhone 4S's camera vs the N8