Getting more from your E61 Active Standby screen

Steve shows S60 newcomers how to see more (and do more) on the E61 standby screen. 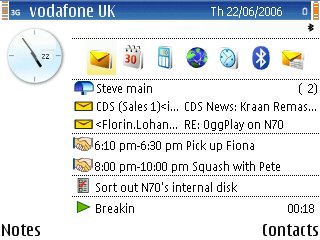 The standby screen in most Series 60 handsets was always a bit of an oddity. Often called the 'hangup' screen or 'wallpaper' screen, it used to just be your favourite picture and some status information.

With the advent of the Nokia 6680, the standby screen got a big update, becoming the 'active' standby screen, with five configurable shortcuts to favourite applications. S60 (2nd Edition Feature Pack 3) then added display and basic control of what your Music player was doing. Finally, with S60 3rd Edition, there's now a summary of your email (or texts) and display of your To do items. And, on the E61 at least, no less than seven extra app shortcuts. Phew!

So we now have a default home screen, the one on which you'll dial ad-hoc numbers and the one you'll probably end up in after a phone call, which is far from an oddity and more an essential part of the S60 experience. It's analagous to the 'Today' screen in Windows Mobile smartphones.

But how can you configure your active standby screen for maximum usefulness? Take a look at the screenshot, top-right. Hopefully you'll agree it's supremely clear and also fairly well populated with information you may not currently be seeing on your own E61. Let's take the various screen elements and I'll explain where it all comes from.

Let's start with number 10, as it's in some ways the most important. The default Nokia E61 theme uses the familiar blue spotlights, with white text overlaid on the active standby screen. This is pretty and works well enough, but for my money any patterning on screen is going to reduce the clarity of the information being shown. As with web sites, a plain white background, with black text, is simply brighter and clearer. Try it and see, if you don't believe me.

In this case, I used the free Orange theme from SymbianThemes, having tried out several and concluded that this was the clearest and with the fewest 'issues' (most S60 3rd Edition themes do something wierd on the E61, either the status bar's all wrong or dialog lines are invisble, that sort of thing). It's a tiny, tiny download and has the side effect of giving you a little more RAM to play with. 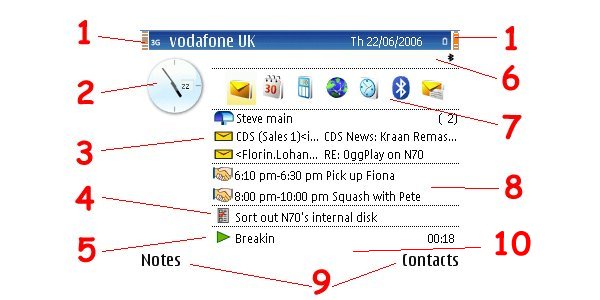 Theme aside, let's look at the other screen elements:

So there you have it, a fully populated, useful and clear active standby screen. Of course, you may hate the whole idea and opt to use Tools | Settings | Phone | Standby mode | Active standby to turn the whole system off and just stare lovingly at your chosen wallpaper!

The E61 has a large and clear screen, waiting to be filled with your 'stuff' - why not use it?