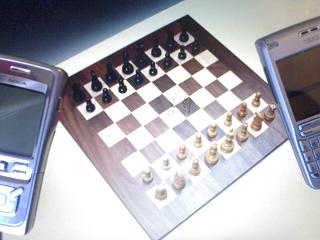 “Look,” said Steve, “there’s a pair of Chess games out for S60 3rd Edition at the moment, maybe we should review both of them?” More fool me for saying yes to the idea of doing a comparison survey. So every odd moment over the last week or so I’ve had my N91 playing chess against an E61 – taking the moves made by one and lifting them over to the other. So my brain is a bit frazzled.

Okay, in the music player corner, from ZingMagic, we have the simply named Chess. Straight and to the point. It’s got a long pedigree, originating way back as “Purple Chess” on the pre-Symbian Psion Series 3a, and the AI has been worked on and tweaked to create a strong game for the full range of human players. In the Qwerty corner we have Chess Genius, from Richard Lang. It also has a long history of a multiplatform approach that, like ZingMagic, takes in UIQ, Palm and Pocket PC. 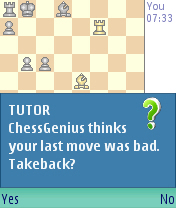 So, was it a fair fight? No, not really. And it’s really not fair to compare computer v computer in this circumstance. Having spoken to John Holloway at ZingMagic, Chess is geared towards taking on a human opponent and providing a challenging game at each skill level, and has a tendency to leave the occasional opening to balance out the [lack of] skill in the human.

And Chess Genius, geared for ultimate chess expertise, sees these intentional omissions a mile away – even handily popping up a warning that “Chess Genius tutor thinks this is a bad move” and offering to let me take it back. Which is nice and reassuring for a human player, but this is AI v AI. But even with this limitation, there was very little to choose between the two applications as they fought each other over various skill levels. Over the whole contest, Chess Genius nosed a little bit ahead of Zingmagic’s Chess, but at the level that most mortals play at, either game can wipe the floor with you on the higher skill levels. 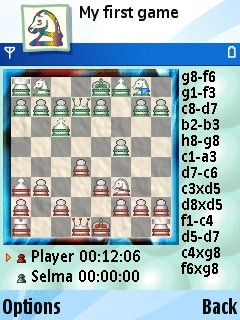 Now that choosing one of the applications over the other due to simple strength is out the window (unless you’re Gary Kasparov, in which case you can afford both), so what else differentiates the two titles. Interestingly, again, not a lot.

While both applications are on one of the newest Symbian platforms, both of them, thanks to their very long heritage (in computing terms), have been through so many versions that the look and feel of each has been polished to a very high degree. There are no obvious faults or bugs in the interfaces, and everything is well thought out, and exactly where you expect the options to be.

Given the choice, I’d tend to go for ZingMagic’s offering, partly because of the ability to tweak the board and piece graphics, although Chess Genius does score highly for a very traditional top down look. What swung it for me is that, certainly at the lower skill levels, with a lot of work I was able to beat the ZingMagic engine and feel that it was a true challenge, where ChessGenius basically wore me down and broke me like the beginner I am. That’s right, I prefer the weaker one that makes me feel good, rather than the stronger one which shows me up. Go figure!