Gently hacking the N8 Panorama application onto the 808 PureView

So you have a Nokia 808 - and you want to shoot a panorama? Yes, you could utterly cheat, as I did recently, but if you want the real thing then you'll be disappointed by the lack of an official Nokia/Symbian panorama application in the rapidly icing over Nokia Store. Actually there is, but you have to know how to get it - as I'll explain below, along with some examples of output on my 808...

In fact, Nokia Panorama was released for the N8 and then never developed further. And certainly never certified for the 808 PureView, which is a shame in view of the improved optics. Yet it (largely) works perfectly, taking advantage of the better camera and increased horsepower, outputting panoramas around 8000 x 1700 pixels at its highest resolution, so about 13MP.

The word 'hacking' in the title is a bit misleading really. In fact, it's nothing more than pretending to be using the N8 online and using the /download trick in the Nokia Store to grab the 'DM'-ed installer. I then convert this to a standard SIS file. Saving you a little time and effort, I've also put up the resulting installer here for you as panorama2506_installer_215242.sis - grab it and install in the usual way on the 808.

I'm guessing the lack of certification for the 808 was because Nokia Panorama doesn't play that well with the Belle FP1/FP2 multitasking - when RAM runs short (when outputting highest resolution images) it can freeze up. So, as a precaution, I'd advise closing most of your other non-essential applications down when playing with Nokia Panorama. 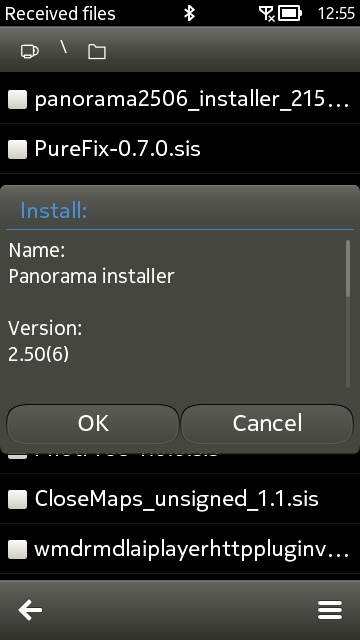 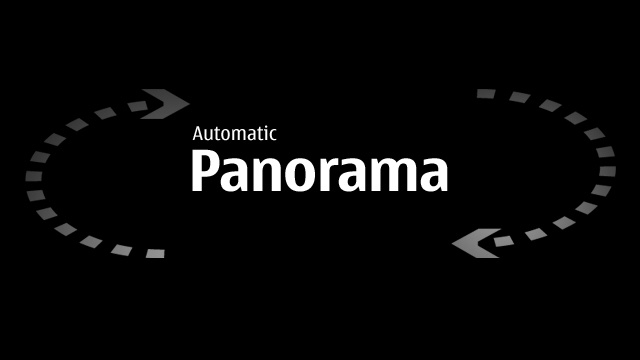 Install Panorama in the usual way, then (as above), it'll run in landscape mode automatically. 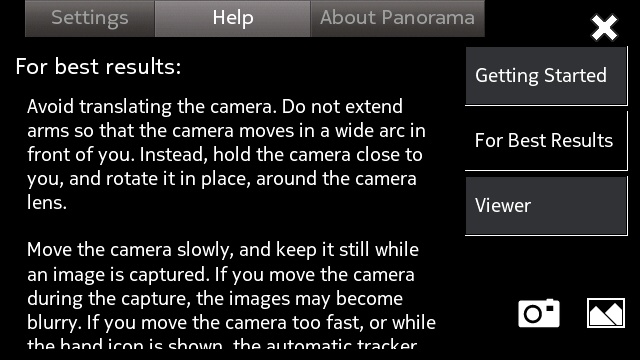 Rather helpfully, there's a complete tutorial built into Nokia Panorama. Common sense prevails, though - swivel slowly and stand stock still when each photo is captured. 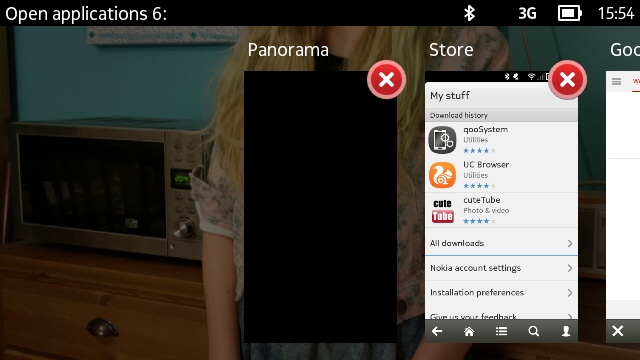 If Nokia Panorama does sense it's running out of allocated RAM, it can go inoperative, as here. Start it with not much else running and you won't go far wrong though. 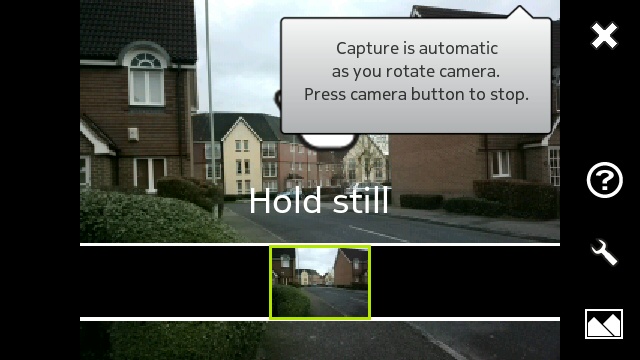 Starting to take a panorama, intending in this case to capture about 270 degrees of view. It's quite practical, on the 808, to take 7 or 8 photos for stitching in this way. 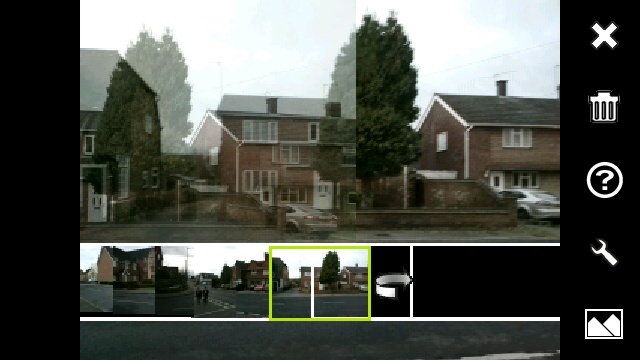 Nearing the end of my swivel, ended by pressing the shutter button again. Don't worry that the photo edges don't appear to match excactly when looking at the on-screen preview - it all gets sorted out later. 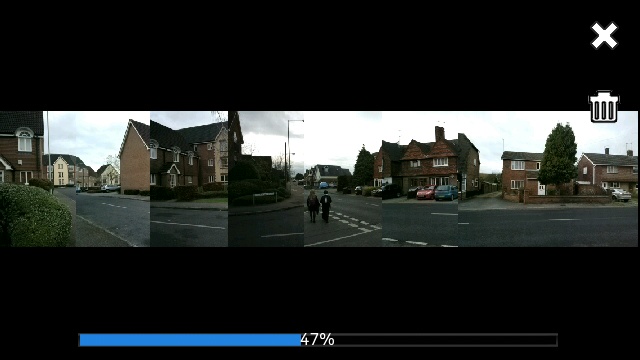 After capture, depending on the chosen output resolution, even on the fast Nokia 808 processor, stitching can take up to a couple of minutes, depending on the number of shots taken. Again, ignore the shot boundaries, which appear to overlap in ugly fashion. 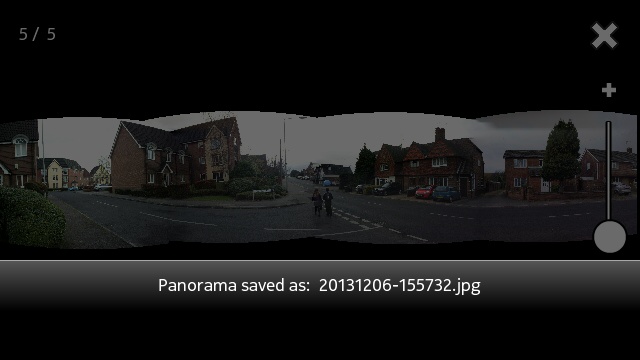 After stitching, you'll start to see the panorama's 'working' edges, along with a finished JPG, with all edges seamlessly matched/merged/blended etc. 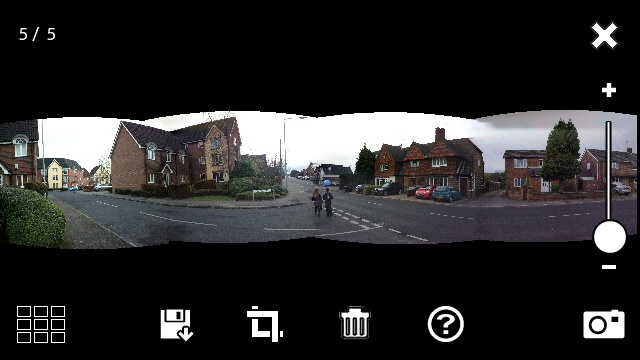 On-screen tools then allow you to (from left to right) show/load other previous panoramas, save out the individual JPGs taken, crop the panorama to eliminate the photosphere-style edges, delete it or view the tutorial again. 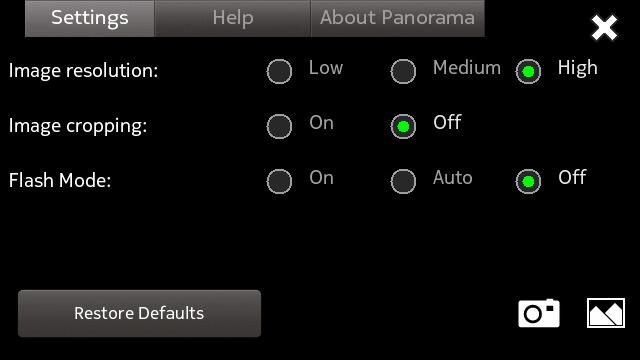 On the N8, 'High' output resolution resulted in stitching times which were often prohibitive - on the 808, 'High' is quite practical, you can download the 13MP example shown here, below, in both uncropped and cropped forms, to see what you think of the stitching on my 808.

Note that the panorama was taken in late afternoon wintry conditions - even better results could be expected if the sun was out properly or in other climes!