How to: overcome or work around some common Belle update issues

Like most of you, I upgraded my Nokia N8 to Belle as soon as it was available. And hit a number of small (and not so small) issues. I realise that this won't cover the full scope of items that others may have run across, but hopefully some of the topics below may help somebody, from working out whether you've got new email to getting a more responsive UI.

(It should be noted that in writing about these workarounds, I'm in no way excusing the existence of the issues in the first place. Note also that the issues I faced on my N8 may be personal and may not reflect what you're seeing on your device!)

I had two problems with Email under Belle. Firstly, aside from the alert sound, there's no visual way of seeing if you have any new email. Adding an alert to the lock screen, status bar or notifications pane surely has to be of the utmost importance to the Symbian development team. Given the absence of this, it's therefore necessary to have the Email widget front and centre on your first homescreen, so that at least new messages will be listed here.

Secondly, and following on from the first point, Email under Belle doesn't, on the default settings, seem to update properly. I was using the standard settings for 'Gmail' and the mailbox seemed forever stuck unless I went in manually and refreshed it. Going into Email's Settings(/Auto-retrieval), I saw that 'Retrieval frequency' was set to 'Soonest'. As I understand it, this means that Email tries to stay connected to the mail server using IMAP all the time and can therefore get emails 'pushed' over. It doesn't work though - at least, not for me. Maybe the problem's with Google's implementation of IMAP?

The workaround for me was to explicitly set a time schedule. Changing the setting to 'Every 15 minutes' (the smallest number in that list) meant that every quarter hour, Email went off and remade the connection to the mail server, refreshing its contents. This now works fine and I the email widget on my homescreen is now up to date - at least, to the nearest fifteen minutes. Which is good enough for me.

Yes, there are still not visual notifications if I'm not on the homescreen, but with the auto-retrieval going on in the background, I do still now get the audio 'dings' reliably when email is available. 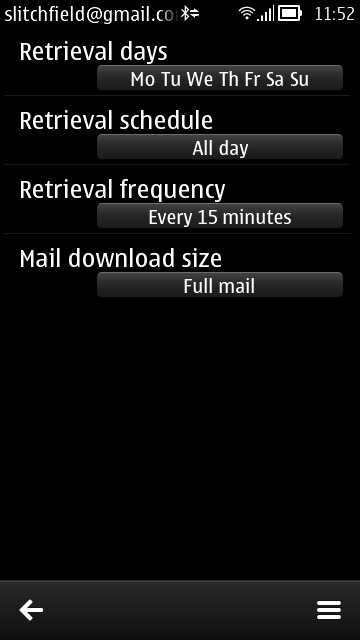 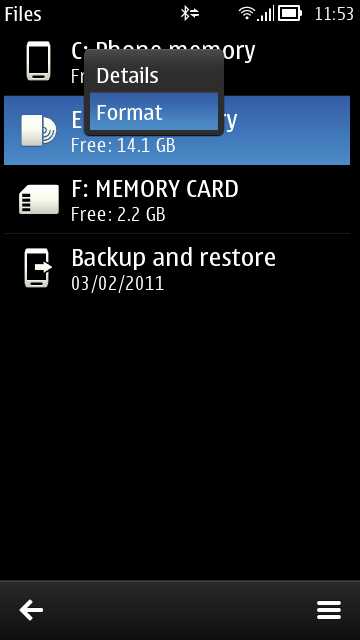 Back and Menu taps missed

Possibly the biggest issue I had with Symbian Belle on my N8 after updating was that the UI became erratic. I'd tap several times on the 'back' icon and nothing would happen. Or I'd tap on the 'app menu' icon from the homescreen and, again, nothing. I put it down initially to lots of processes running in the background and gave it a day to shake down. If anything, the erratic responses to these icons became worse though and so I started to think.

"Surely", I reasoned, "if this was really a bug in Belle, something so huge and debilitating would have been picked up in the testing over the last six months? Therefore, most people can't be seeing it, which means it's not there. So why was I having the issue?".

The obvious factor that was different was that I let Belle update 'in place', i.e. with Nokia Suite restoring my user settings and with my mass memory intact, complete with a year's detritus. Time to take one for the team. Step 1 in the diagnostic was to try *#7370#-ing the N8 and start with fresh OS settings and data. Ten minutes later, even setting up the basic applications I needed, I noticed the 'Back' icon problem was still present. Step 2 was to (take a deep breath and) wipe the mass memory. From 'Files',  I reformatted the disk (long press the disk name). And then carried on setting things up - and.... the 'Back' problem seemed to be gone.

Having to completely wipe and then rebuild your smartphone sounds more drastic than it actually is, with user data coming in via your usual sync solution and with apps coming in from the Nokia Store. Having then built up my mass memory and got back to my usual load of installed applications and running services (Mail, etc), I'm now starting to see some loss of 'Back' taps when something's happening in the background - Email is a prime culprit, I think - perhaps part of the problem is simply processor loading? Your comments and experiences welcome here - I need more data points! My guess is that Nokia/Accenture still have some touch event optimisation to do here. Watch out for performance patches, etc. in the future!

I've gone through Belle optimisation before, but it's worth stating that I've ended up making two folders in the applications list: 'Rarely used' and 'Games'. I then moved roughly 20 icons into 'Rarely used' (by tapping and holding each) and then moved my dozen or so games into their own folder too. The end result is that my main apps screen is now very quick to scroll through, to find the app I need.

One thing I noticed when I installed Nokia's 'Social Networking Client' (v1.5) update from the Nokia Store, immediately after the Belle update, was that when it came to 'installing the Social widget', I got an error message. It flashed up briefly and then was gone. And no Social widget, indeed. Being (normally, though in this case I'm taking 'one for the team') something of a Gravity fan, I didn't let this bother me, but the very existence of the error should have alerted me. Having had the UI issues above and having done a full wipe of C: and E:, I found that Social 1.5 installed completely cleanly, including its widget. So take this as another vote for a complete wipe after the Belle update if you hit issues!

One huge note: After installation, Social 1.5 does all sorts of contact entry linking and updating behind the scenes. Allow a good 15 minutes for this. You can still use the phone, but bear in mind that some operations may be slower than usual. All seemed OK in the end, and the Social widget works just fine, as you'll see below. 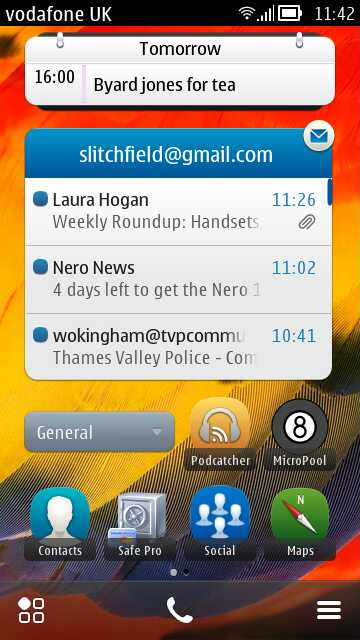 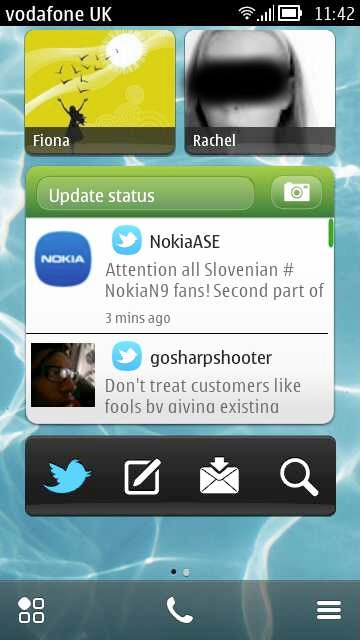 Tempting though it is to set up a full six homescreens, packed with widgets, I'm a firm believer in keeping things simple and clean. I've ended up with two homescreens under Belle, shown for your interest above. I tried, I really did, to keep it to just the one screen, but in the end the need to have my favourite contacts readily available meant that I'd already overflowed to screen number two. So that became my 'social' screen, as you can see. Comments welcome if you have a different approach!

I can only think that sharing via Nokia Social worked fine with Belle while the former was at v1.3, but that the significant rewrite for Nokia Social for v1.4 and v1.5 in the last couple of months has seen something slip out of line, because trying to share photos straight from Gallery when Nokia Social 1.5 is loaded produces the above error. No doubt either a new version of Social or a patch to Gallery will fix the issue in time, but for now it's easy enough to tap on the camera icon in the Nokia Social widget or in any of its status update screens and pick 'Photo from Gallery'.

Many people were puzzled when, after launching the Store client after the Belle update, to see that an update was more or less forced immediately, to a new Store client version. This again reflects that Belle was more or less finalised at the end of last year, while the last two months has seen quite a few new versions of Store, written in QML, and while it's not compulsory to update to this, it does offer a faster experience. In fact, there's a new version out today, as I write this, claiming bug fixes and better 'alignment with the Nokia Store back end'. Go grab it and move on, like I did!

Actually, a slight clarification: most of my .flv videos played just fine, those grabbed from YouTube (shhhh) back in 2010 at 240p (i.e. 240 pixel vertical resolution, QVGA etc). But those downloaded more recently at 360p (which you would have thought perfect for the Symbian nHD screen resolution) grind to a halt immediately. I'm sure that Nokia and Adobe can sort out a fix, but in the meantime, use MP4 if possible for downloading videos - there are a wealth of utilities to grab in this format these days.

I do hope some of this has helped you - do please comment away to share how you've overcome some of the issues, differences and caveats in Nokia Belle....

Filed: Home > Features > How to: overcome or work around some common Belle update issues